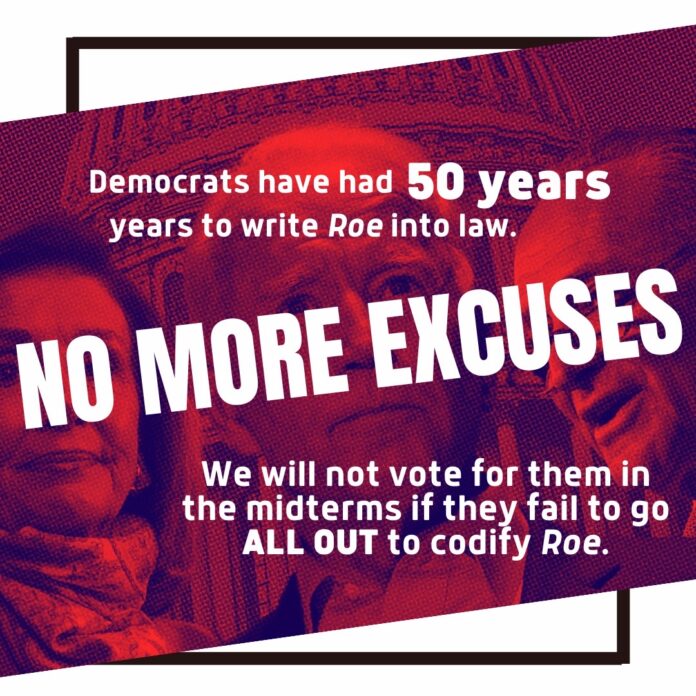 We’re in a pivotal moment where the right of millions of women and LGBTQ people to have abortions, a basic aspect of bodily autonomy, hangs in the balance. The draft Supreme Court decision written by Justice Alito, if it remains the decision of the body, would destroy the precedent set by Roe v. Wade in 1973 and legally put gay marriage, victories over anti-sodomy laws, birth control, and even interracial marriage in jeopardy. It would be a game-changer in terms of the real lives of millions of people, especially in the more than 20 states where abortion would be immediately banned due to trigger laws.

Banning abortion has been a project of the hardline religious right for decades. The issue has been something of a litmus test for Republicans both in federal and state office, long prior to the transformation of the party that Trump’s presidency carried out in the last few years.

However, as Republicans have predictably attacked abortion rights and made it a core part of their political offensive in states across the country and promised to roll back Roe v. Wade nationally, Democrats have miserably failed to put up any defense, even as they campaign on protecting abortion.

Biden pledged during his campaign to use his presidency to achieve legal abortion – and failed to deliver, even with a majority of the House and Senate. What’s even more stunning about this is that it’s the second time in a row Democrats have held a majority and failed to deliver on this promise, the first being Obama’s supermajority in 2008. In fact, the Democrats have had 50 years to write Roe v Wade into law. Each of the past three Democratic presidents, Jimmy Carter, Bill Clinton, and Barack Obama, have – at the start of their presidency – had full control of the White House and Congress and a clear path to guarantee free, safe, and legal abortions.

Even more infuriating for the thousands of working people and youth who protested the draft Supreme Court decision last week was how the Biden administration and Democratic Party in general, which has promised that votes for them would translate into safe abortion rights, safe LGBTQ rights, action on climate change, and pandemic safety, has delivered nothing.

The message is loud and clear – if we wait for Democrats’ action to codify Roe, we’ll wait forever. It’s time that working class people across the country take a stand against the long string of broken Democratic promises.

Socialist Alternative has launched a petition to be signed by all working people who refuse to vote for the Democrats in the midterms if they fail to go all out to codify Roe. Instead, we commit to building a left alternative that would be accountable to social movements and run independent candidates that fight unapologetically for working people and against oppression.

It’s becoming clearer to more and more people that the Democratic Party is a party of big business – that we cannot vote for – and that we need a new party for workers and youth. Every time the Democrats make a big promise, they find someone to blame for why they can’t deliver – Republicans, Senate Parliamentarian, Joe Manchin. Today, Manchin announced that he would not vote for a bill to codify Roe – and if past experiences are any indicator, the Democrats will use his opposition to sigh and declare their hands are simply tied. This is unacceptable.

It’s not too late, the final decision has not been issued, and history has shown that mass protests, occupations, walkouts, and strike action can make even the most reactionary forces stand down.

We need a party that will encourage, organize, and lead in these mass actions for the rights of working and oppressed people – not one that undercuts social movements at every turn and makes false promises with no intent to deliver.

Sign the petition here, send it on, and get organized to fight for abortion rights!