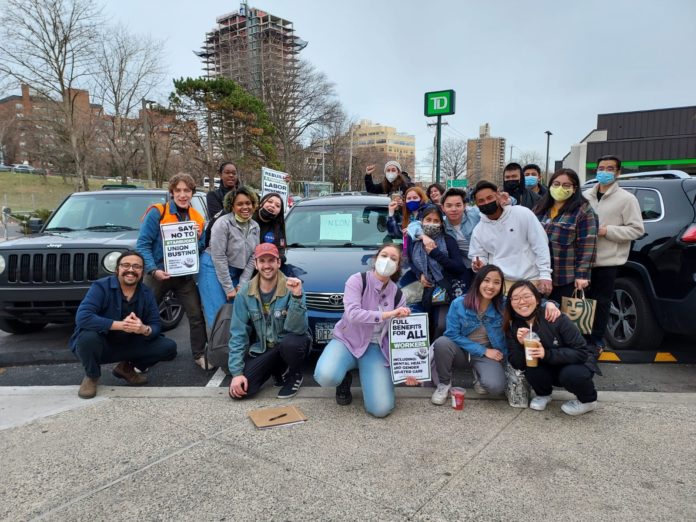 On March 22, at 3pm, Caesar’s Bay Starbucks in Brooklyn, NY closed down its store early to prepare for a meeting held by corporate managers that every employee was required to attend, regardless of shift schedules.

These types of meetings have become more common across the country in response to the wave of union organizing among workers at Starbucks and other coffee shops. Managers will try to convince their staff that they are there to listen to the workers’ complaints with the goal of reaching a compromise, implying that unions are an “unnecessary third party.”  However, many workers are increasingly aware that these meetings are a serious union-busting tactic employed to crush and diminish any union support, especially in workers less informed about what unions are, or to scare the ones still building their confidence in the fight. This messaging is extremely incorrect and harmful: workers are the union, and having a fighting union is the only way to guarantee that workers win demands from management. But not only is the language harmful, these meetings can also provide a pathway for management to pretend to meet a demand that can be taken away at any moment.

For example, one of the Caesar’s Bay workers’ demands is to have guaranteed hours. Managers can easily say “no problem!” and concede this demand for a time period of a few weeks, dangling the promise of meeting other demands just a couple yards away – until the union vote date passes and they drop the act, returning to business as usual pre-union drive. And if any demands are genuinely met, it’s proof that these are simply concessions that have been won exclusively by workers organizing and making their workplace needs clear.

Caesar’s Bay Starbucks went public along with four other locations throughout New York City. Socialist Alternative members were eager to help the workers win their union in any way we can! Right after the workers at Caesar’s Bay went public, our Brooklyn members went to the store to see how we could get involved.

Since the store went public, Starbucks workers have had their hours cut, have been assigned shifts that conflict with classes or other obligations, and have been pulled aside for one-on-ones with managers equipped with anti-union propaganda and attempts to buy no-votes with promises of raises or promotions (to positions the workers told us were completely made up). These are just some of the methods employed by Starbucks to threaten and scare workers into falling in line and dropping all union building activities.

We started out canvassing, racking up petition signatures in protest of Starbucks’ union-busting from community members showing their solidarity with the Starbucks baristas fighting for the right to organize.  Workers inside could see through the tall windowpanes that the community supported them, proven by orders placed under the name “Union Strong” or “Union Yes.” At the tail end of one of our canvassing shifts, workers clued us in on a “captive audience” meeting Starbucks was holding that Tuesday, and invited us out to demonstrate right outside the store as it happened.

Tuesday afternoon was windy and cold and passersby were confused as to why the store was closed so early. Through the tall windows, we could see workers sitting in a circle of chairs and we waved to the ones we recognized. Then we started chanting. At full volume we yelled, “What’s disgusting? Union busting!” and struck up conversations with community members wondering what was going on. Managers turned our way when we chanted, and we were all too visible as we engaged in many conversations and collected signature after signature of enthusiastic support.

The meeting was scheduled for 4-5pm, but at 4:45, workers emerged, holding the pizza boxes provided in their arms, the meeting having ended early because the workers refused to contribute to the meeting.

We were told then by amused workers that managers were visibly flustered as our yelling and stomping started and one worker even called one manager out on a bluff regarding store safety.

“​​The intent of the meeting was to get us to air our grievances so they could figure out which workers to target with union busting,” Megan, one of the lead organizers of this location later told me. “But our silence made the meeting backfire. Management acted like the meeting was just a check in with us. There was not one mention of the union.”

Actions like these demonstrate the effectiveness and absolute necessity for worker-led agitational methods. The Starbucks workers invited us to show up and disrupt a business-as-usual captive audience meeting, and we were able to completely derail and shut down one of Starbucks’ most favored union-busting tactics.

This solidarity effort is a clear example of what can be achieved when workers are able to organize and fight for demands from a class struggle perspective. We can win unions in our workplaces, we can win contracts that meet our demands, and we can win fights for renters rights and against legislation proposed by the far-right.

Caesar’s Bay Starbucks workers receive their ballots April 8th, and with solidarity and struggle paving the way, they are sure to achieve victory.