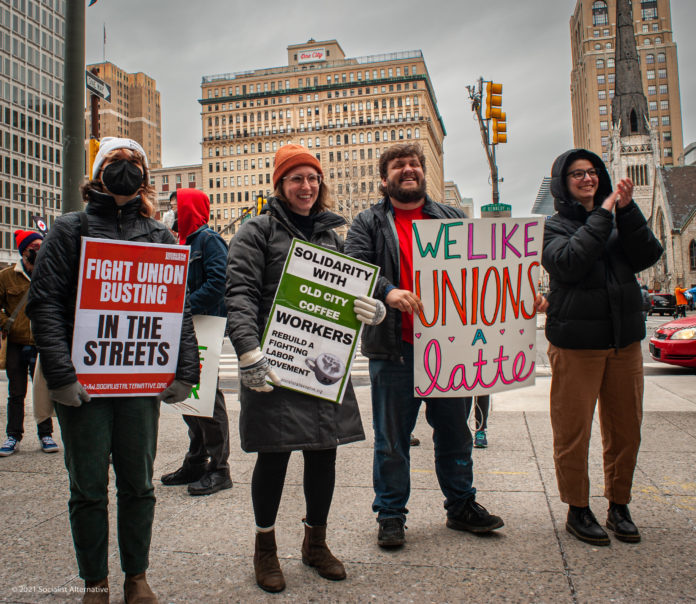 On Sunday, workers from Philadelphia Starbucks locations as well as local coffee chains Good Karma, Old City Coffee, and Korshak Bagels gathered for a rally to protest union-busting tactics from their bosses like captive audience meetings.

Collin Zastempowski of Korshak Bagels, a store which has already won a union and is now fighting for their first contract, spoke about how delay tactics from their boss on wages and other issues forced workers to think seriously about a union. “It’s the myth of the progressive boss: it’s all, ‘we hear you, we see you; you are not getting a raise’… They said they needed to pay back investors – but I’ve never seen an investor make a bagel.”

Earlier that week, workers from Old City Coffee presented their petition for union recognition to their bosses, including demands for a living wage before tips, predictable scheduling, and healthcare for all workers. The petition gave Old City Coffee bosses 48 hours to voluntarily recognize the union – but the deadline passed with no word. Now, Old City Coffee workers are heading forward to a union election.

“Our power comes from being organized in our stores and building support in the wider community and labor movement, not from clever arguments at the bargaining table or moral appeals to our bosses,” said Hannah Boroff, a worker at Old City Coffee and member of Socialist Alternative. “As we’ve seen with mega corporations like Starbucks to smaller chains like Pavement and Darwins in Boston, bosses small and large will fight tooth and nail to avoid delivering on workers’ demands.”

Along with nearly 100 rally participants, speakers from other unions attended in solidarity.

“A union changes the balance of power in the workplace. And where power goes, money follows,” said Marty Harrison, Vice President of her local of PASNAP, a union representing Pennsylvania nurses.

“When it was slow recently, peoples’ hours were getting cut,” said Margot Handley, a worker at Old City Coffee, on Thursday after she and a group of coworkers delivered their union petition to their boss. “[A union] is protection against things like that – I need to know what hours I’m working, I need to be able to guarantee a certain amount of hours so I can budget.”

Since the movement of unionizing coffee workers erupted in late 2021, workers have encountered a stone wall of resistance from bosses. Starbucks has employed a notorious union-busting law firm with over $600 million in annual revenue, Littler Mendelson, to thwart the workers by a combination of direct attacks and delay tactics.

Starbucks workers report management using “captive audience” meetings to inundate employees with anti-union messaging, alongside more insidious measures like drastically cutting the hours of workers active in the unionizing efforts, or firing them entirely, in the case of seven workers leaders at a store in Memphis last month. Last week, Workers United filed more than 20 “unfair labor practice” charges with the National Labor Relations Board, including wrongful termination and unapproved surveillance.

While smaller businesses like Old City Coffee and Good Karma don’t have the resources to hire massive law firms to beat unions in their stores, neither has voluntarily recognized their workers, displaying their conviction that decision-making in the workplace belongs to bosses, not workers. But workers can prove them wrong.

Rallies like Philadelphia’s, and a similar action held in Pittsburgh earlier in the month, demonstrate the kind of solidarity that exists for this movement among working people generally. To beat union-busting, the best defense is a good offense – solidarity days of action and walkouts can win demands and overcome bosses’ stalling by disrupting the flow of profit. With bold tactics, workers can win even against vehement opposition from the bosses.