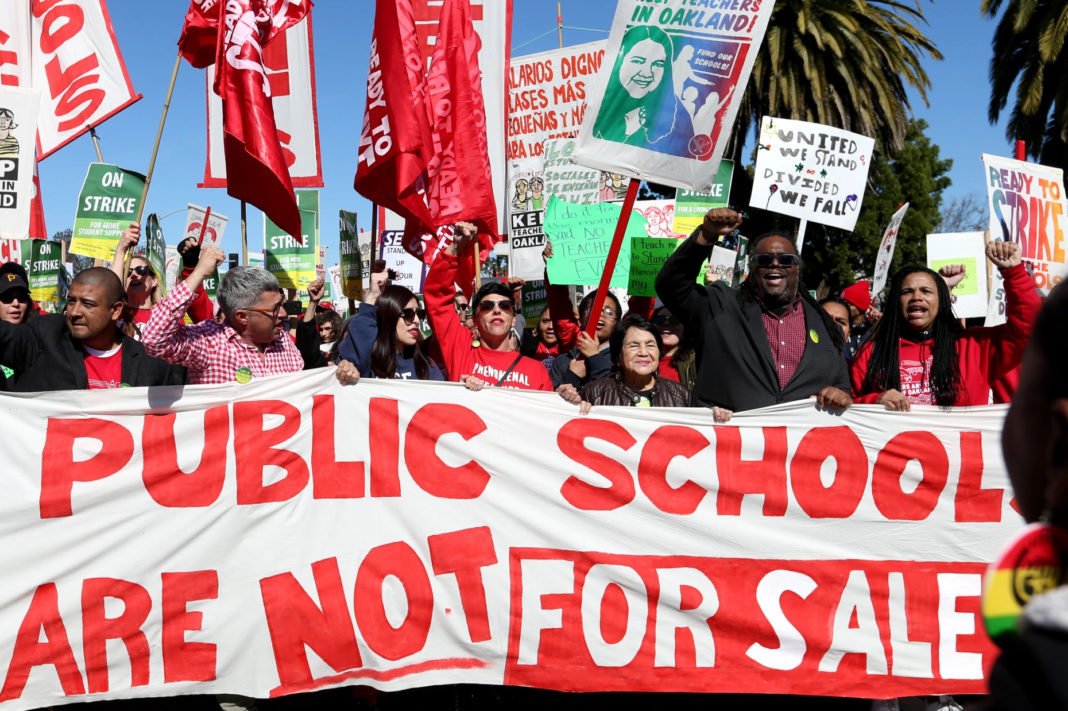 With education unions in Minneapolis entering their third day on strike, workers, students and families, and activists can glean important lessons from the last decade of strikes in the education sector. Public schools and public school teachers have had to endure decades of neoliberal attacks where chronic underfunding was paired with measures aimed at privatizing schools which include the growth and corporate funding of charter schools which are largely non-union, high stakes testing, vouchers, and public school closures. Students and families have fought back against these measures, from boycotting standardized testing to organizing occupations of schools threatened with closure. But it’s been particularly through the labor struggles of teachers and education workers unions, the organized working class within the schools, that victories have been won in both slowing the progress of the corporate privatizers, and clawing back some of the funding that politicians from both major parties have drained from public schools.

For years, public school teachers have been viciously scapegoated by the establishment for the failures of the capitalist system itself. The labor movement, up until the Red for Ed movement of 2018, was in a decades long decline, with strikes at their lowest point ever in 2017. Broadly speaking, the leadership of unions long ago bought into the team concept, where the union and the boss supposedly work together as a “team.” This has meant that union leaders see their role as negotiators who try to minimize the concessions workers take, instead of political leaders who organize their members to directly take on the employers. The Chicago Teachers Union (CTU) strike of 2012, was an important departure from the team concept.

While the 2012 CTU strike was only a partial victory for teachers, it was critical in inspiring rank and file activist teachers across the country, including those that helped lead the Red for Ed strike wave. The strike would not have taken place except that a new, more radical leadership organized in the Caucus of Rank and File Educators (CORE) was elected in the CTU prior to the strike, and the old do-nothing leadership was thrown out. Workers’ power on the job is inseparable from their ability to be organized and act in unity, and that is far more difficult without a union leadership that is willing to wield workers power. The new leadership in CTU were elected based on a platform of bold demands and an explicit commitment to lead the CTU membership to confront the employers directly and strike if necessary.

In the 2019 teachers strikes in Oakland and Los Angeles, newer union leaderships who were willing to organize a strike were a key feature of both struggles. The courageous statewide teachers strike that broke out in West Virginia and inspired the Red for Ed movement in numerous states and cities was led by rank and file activists who organized both outside and inside of the official union structures. The official statewide union leaders in West Virginia were dragged along with the movement when it was clear that there was overwhelming sentiment within the membership for a strike, and the official leadership wasn’t strong enough to shut it down.

Strike leadership can come from the official union structures or it can develop from the membership, but in order for a strike to happen at all, there must be leadership that is willing to organize workers to fight the employer. Every official union leadership has to sit at the bargaining table with the employer. The question is whether the leaders’ bargaining strategy is based on the strength of mobilizing the members in united action against the employer, or if the leaders are prepared to agree to the least bad deal they’re offered. A class struggle approach, where the leadership is clear that the interests of the boss are diametrically opposed to the interests of the membership and are not afraid of mobilizing and using workers’ collective power, is a prerequisite to winning a big victory at the bargaining table.

Oakland in early 2019 was a city substantially transformed in the weeks before and during the teachers strike. Teachers, parents and students were organizing meetings, fundraisers, walkouts, and emergency daycares complete with food delivered daily. When the strike began, well over 90% of students stayed home, in an overwhelming show of support for the teachers. Thousands of school community members were mobilized at multiple afternoon mass rallies protesting school closures and charter school expansion. Signs supporting the teachers were in the windows of homes and businesses on virtually every block.

Like the teachers strikes in Chicago in 2012, and in Los Angeles in 2019, the Oakland teachers strike was not an isolated labor action, but an inspiring movement that galvanized the broader school communities behind demands that represented the needs of students and families. Chicago teachers in 2012 rallied behind the slogans, “The Schools Students Deserve,” and “Teachers working conditions are students learning conditions”. CTU fought not just for better wages for teachers, but also an increase in school funding, taking aim at the neoliberal agenda that has been so destructive to public education.

Building support in the community for striking teachers is critical. It is in the interest of students, families, teachers and other education workers to have a publicly owned and operated, well-funded school with experienced and low-turnover staff in every neighborhood. The capitalist political establishment, if given an opportunity, will try to divide teachers from school communities. This is the standard approach of the bosses to try and break public sector strikes, from schools to transit. The employers will try to portray striking teachers as “selfish” and hurting kids by going on strike. Unions undermine these portrayals by fighting for demands that are in the interests of both school workers and students and families, as well as energetically mobilizing the broader school community into the struggle.

In the private sector, cutting off the flow of profits by going on strike and stopping production typically puts tremendous pressure on the employer. In the public sector, where profits aren’t directly produced by workers, strikers need to escalate the struggle in order to win the biggest gains. The West Virginia teachers strike was successful in winning a pay raise for the entire public sector workforce in part because teachers not only walked off the job and forced schools to close, but they also occupied the state capitol building in Charleston. With the movement threatening to draw more workers into struggle against the political establishment, politicians were forced to make a serious concession. The direct action tactics of the teachers helped escalate the movement into a real political crisis for the establishment.

Strikes in Oakland and Los Angeles were developing into big crises for the establishment. Socialist Alternative has argued that more could have been won if, instead of accepting tentative agreements and calling off pickets while there was a strong mood to continue fighting, both union leaderships had chosen the path of more escalation. In Los Angeles, afternoon marches and rallies were truly mass affairs with tens of thousands attending. Workers from other sectors were showing up in groups, all wearing their union jackets. In Oakland, the teachers union was allied with the port workers organized in the ILWU. Even the threat of spreading the strike to other sectors would have been an extremely dangerous precedent in the eyes of the capitalist class and political establishment and could have forced bigger concessions.

Instead, after big sacrifices in time, energy, and lost wages for workers and school communities, union leaderships in both LA and Oakland accepted tentative agreements that represented only modest gains for members and students. Disappointment in the agreement was reflected in the 42% “no” vote in Oakland, after a mass meeting of union members to debate the agreement. The close vote highlights the need for unions to maintain pickets until a deal is approved, and to have a plan to continue the strike if the deal is voted down.

In both cities, these were the first teachers strikes in many years, and the leaderships made the wrong calculation in accepting deals prematurely. Another factor is the relationship between unions, including teachers unions, and the political establishment in Democrat-controlled cities like LA and Oakland. Escalating the strike is no less a threat to the Democratic politicians in California than to Republican politicians in West Virginia, and union leaders were undoubtedly under serious pressure from the political establishment to settle the strike.

The Red for Ed movement in 2018-2019, and the CTU strike in 2012, played historic roles in bringing strikes back into the discussion of the U.S. working class. While there is still much to fight for, the educators strikes were the first major pushback to the neoliberal offensive on public education, and they made a powerful impact on the consciousness of workers and school communities nationwide. Minneapolis educators can look back at these strikes for a wealth of lessons on how to win their strike and wrest the biggest possible concessions from the employer. If Minneapolis educators are successful, they will provide momentum and inspiration for the next educators unions who are getting ready to go into negotiations.