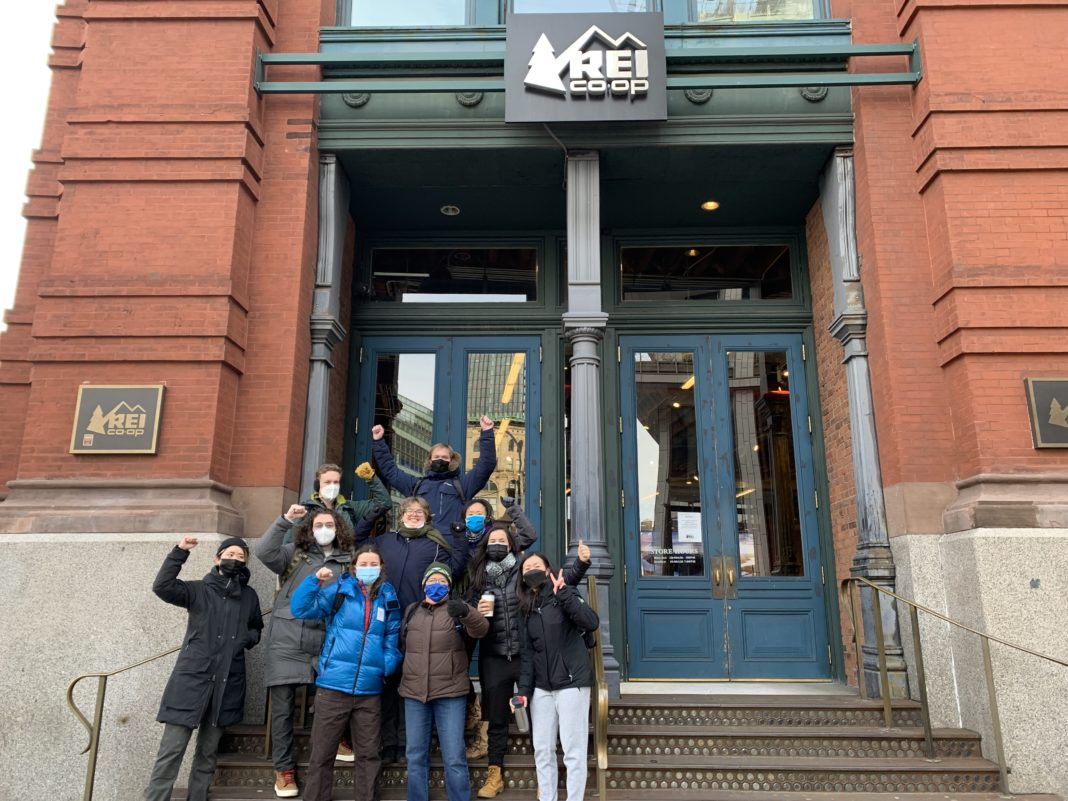 Congratulations to workers at REI SoHo in New York who just voted 88-14 to establish the first union at REI in the country, and join the Retail, Wholesale and Department Store Union (RWDSU)! This landslide victory, which workers won despite a massive union-busting campaign by the company, will give confidence to other workers fighting to unionize, including Starbucks baristas who are waging a historic unionization campaign in Seattle and around the country.

REI workers are fighting for a living wage, reliable hours, greater control over scheduling, stronger COVID and other safety policies, and an expansion of healthcare to cover more employees sooner. Councilmember Kshama Sawant’s socialist City Council office, and our organization Socialist Alternative, look forward to fighting alongside the SoHo workers when they begin their struggle to win these demands during their first contract negotiation. We also stand with REI workers in Seattle and other cities who are undoubtedly inspired by the SoHo unionization victory and want to build upon it.

Despite making $3 billion in annual revenue, REI forces employees to work for a full year without qualifying for health insurance. Even then, the company offers healthcare only to those who work 20 hours per week or more. And in one of the most expensive cities in the country, amid skyrocketing rent and rising inflation, REI pays workers at the SoHo store less than $19/hour. Workers have described a lack of concern by REI management over workplace safety, lack of worker input over hours and shifts, and retaliation by the company against workers who asked for better COVID safety precautions.

And none of this is new for the way workers have been treated at REI, belying the media image of a progressive corporation that cares about its workers and the wider community. In 2016, workers at the flagship Seattle store organized themselves as REI Workers for Real Change, demanding access to full-time hours, the right to unionize with card check neutrality (meaning, if the majority of workers sign union cards, REI must agree to recognize that union), and urgent cost of living raises. Our Council office was proud to have fought alongside REI Workers for Real Change, including organizing an important solidarity rally at Seattle City Hall, with workers from UFCW Local 21 and the MLK County Labor Council joining us. At the rally, workers described the cutthroat corporate environment at REI, and facing intimidation and retaliation for speaking up. Homelessness, hunger, and other precarious living situations were not uncommon for them.

On top of the conditions that the company forced on its workers for years, REI management in SoHo refused to recognize the union voluntarily when a majority of workers signed union cards. Instead, the company forced workers to endure a weeks-long anti-union campaign that included captive-audience meetings with management, anti-union mail delivered to workers’ homes, and messages from REI executives urging workers to vote against the union.

In one anti-union message, REI’s Chief Diversity Officer began with a land acknowledgement to the Ohlone Tribe before launching into an anti-union propaganda offensive. This is a perfect example of how “woke” capitalists and their political representatives will give lip service to progressive values, and at the same time launch attacks on working people. We saw an example of this in Seattle just two weeks ago, when Democrats on the City Council proclaimed Black History Month, and later in the same meeting, voted to end the pandemic eviction moratorium in Seattle, which will have a disproportionate and serious impact on Black families, many of whom will face homelessness.

Workers at Starbucks are also facing a brutal anti-union campaign from a company that calls itself “progressive”. Workers are beginning to realize that companies like REI and Starbucks, while they may use progressive rhetoric, will fight tooth and nail to defend their profits, at the expense of workers.

Workers need to get organized on the basis of solidarity to defend our interests. REI workers are showing the way. And we need a class-struggle approach, not having illusions that the bosses will act in good conscience. Socialist Alternative urges workers at all the 168 REI stores across the country to organize unions to fight for what you deserve.

Congratulations to workers at REI in SoHo, and solidarity to workers at Starbucks, Crossroads Trading Company in Seattle, and others who are currently fighting to unionize and should be inspired by this victory.