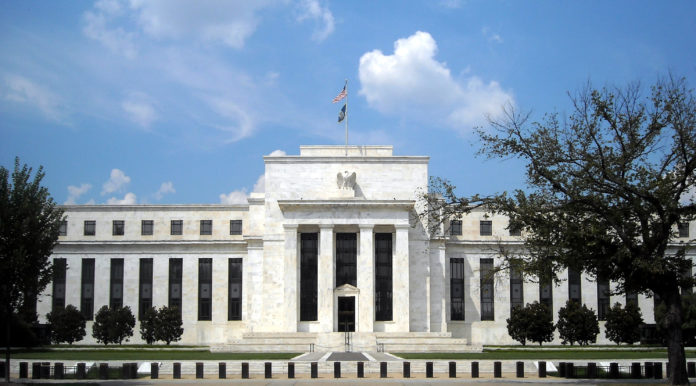 A year ago, the U.S. and world economy were pulling out of the biggest slump since the 1930s triggered by the pandemic. Nevertheless, capitalist commentators were quite optimistic about the near term. This was for three reasons: the rollout of vaccines promising a “return to normal,” the prospect of a strong economic rebound due to unprecedented stimulus contributing to pent up demand, and Biden taking office. When inflation began to rise, we were told this would be a temporary phenomenon due to snarled supply chains and would soon work itself out.

A year later there is far less optimism. Inflation in the U.S. is running at 7.5%, a 40-year high. Supply chains are still not working properly. The danger of the economy tipping into recession is very real. And while mass vaccination did indeed save a lot of lives, the fact is more people died in the pandemic under Biden in 2021 than in 2020 under Trump. Now, the establishment is increasingly throwing up its hands and giving up altogether on dealing with COVID. But as much as ordinary people understandably want to move on with their lives, there is no “return to normal.” On top of this the war breaking out in Ukraine will have massive economic consequences including higher energy prices globally.

What is being revealed is a deeper crisis of the capitalist economic and social order for which there is no straightforward “fix.”

The Scourge of Inflation

A high level of inflation erodes the value of wages and savings and puts enormous strain on working people, especially the poor. Inflation has now spread into a wider range of goods including energy, housing, and food. It is estimated that the average U.S. household is losing $250 a month due to inflation.

The chairman of the Federal Reserve, Jerome Powell, has had to admit that the current inflationary spike is more than a temporary phenomenon. It is clear that the immediate cause is supply chain problems. This takes a number of forms, such as the months-long back up of container ships at the ports of LA and Long Beach in Southern California, a shortage of truckers to get the goods from ports to their destination, and insufficient production of semiconductor chips for auto production.

A “debate” has broken out in the establishment about whether the real cause of the current inflation is the supply chain issues or the stimulus measures taken to restart the economy in 2020 and early 2021. It is certainly true that part of the context for the current problems is the trillions pumped into the financial markets and the lesser sums spent on unemployment insurance and the checks people were sent. But the bulk of the money sent to ordinary people went to pay rent, bills, and groceries (i.e. to just survive). The child support tax credits, which have now been stopped, cut child poverty by one-third. What the right wants you to believe is that somehow putting a bit of money in people’s pockets in the middle of a catastrophe sent everything out of whack.

Obviously people who still had jobs and could work from home may have spent more on electronics than on going out during lockdown, thus leading to a big increase in the volume of shipping. But the global supply chain was already under strain due to the growing conflict between the U.S. and China, as well as the effects of climate change.

While the central bankers strive to maintain what they consider a normal, “healthy” level of inflation, they fear high inflation. This is partly because high inflation is very disruptive to the economy generally. But they almost always point to the alleged danger of rising wages leading to a “wage price spiral” where wage increases are “passed onto” consumers. But in the fine print, more serious analysts admit this is basically bogus. In fact, as Karl Marx pointed out long ago, rising wages generally cut into the level of profits and do not fundamentally affect the price of goods which is determined by the value they embody and market conditions.

Indeed some unions have won wage increases in the past period and many employers are raising wages to keep or attract workers. But despite this, overall wages are not keeping pace with inflation and workers are therefore experiencing a pay cut.

What the capitalists really fear is that inflation will push workers to get organized and demand not just wage increases but a shift in the balance of power in the workplace. They fear that inflation, combined with the enormous discontent expressed in the “great resignation” will help spur the class struggle and social unrest as it did in the 1970s.

The Next Phase of Crisis

In order to deal with the threat of inflation, the Fed is preparing to ramp up interest rates from the virtually zero level they are at now with four increases this year and possibly more. Raising interest rates will increase the cost of borrowing and slow down economic activity. It will make everyone’s debts more expensive to repay. In the current fragile economic situation, rapid rate increases could easily tip the economy into recession.

A rapid rise in interest rates in the U.S. will have even more serious consequences in many poor countries where it will worsen a growing debt crisis, especially as a large portion of debt is denominated in dollars. Heidi Chow, executive director of Jubilee Debt Campaign recently said: “The debt crisis has already stripped countries of the resources needed to tackle the climate emergency and the continued disruption from COVID, while rising interest rates threaten to sink countries in even more debt.” The JDC estimates that 54 countries are facing a debt crisis.

The Fed is also winding down its asset purchasing program which pumped tens of billions per month into the financial markets. This, and higher interest rates, represent the beginning of the end of the “era of easy money.” The “easy money” policies began in the wake of the 2008 crash and never fully went away.

What is striking is that the capitalists did not use all this capital to make productive investments. Rather they largely plowed it into the financial markets and reinforced their character as a global casino inflating a series of bubbles. These are now set to burst, including the massive debt crisis in the Chinese property sector and cryptocurrency. For forty years, neoliberal policies of privatization and attacking workers’ living standards helped to prop up profits. When that started not to work anymore, the policy makers turned to easy money. Now that has hit the wall as well.

No Way Out Under Capitalism

The establishment is lurching from one approach to the other, but none will fix the underlying problems. When the next recession comes, it will be in the context of high inflation and rising interest rates. The scale of stimulus we saw in 2020 was predicated on near-zero interest rates and low inflation. This time around any meaningful help for working people will require serious social struggle.

Socialist Alternative has been pointing out for the past two years that capitalism can no longer find a stable position for profit-making. It is a system in rapid decline, facing a series of crises of its own making including the ongoing global pandemic, the worsening climate crisis and now the beginning of war in the Ukraine. It is increasingly parasitic, unable to offer society any way forward towards a better future. Rather, for young people especially, it offers low wages, no real access to health care, and endless precarity. It continuously breeds racism and sexism. The profound loss of credibility of its institutions and the complete failure of the “liberal savior” Biden who sought to evoke FDR are opening the door wide to the right and far right. Capitalism has no answers, but we do: working people must take the helm and begin building a socialist future.