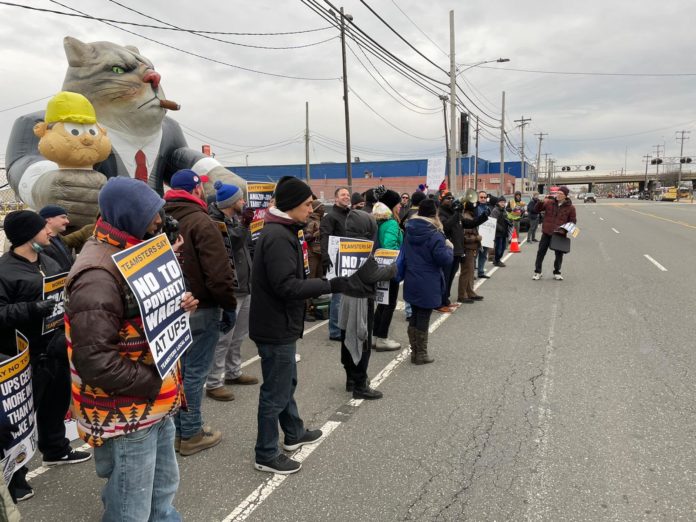 Early this year, UPS slashed pay for part-time workers by up to $6 per hour, prompting a rapid response from UPS workers nationwide. On February 23, over 500 Teamsters from across Northern and Central California convened at UPS’ San Francisco building to protest the pay cut, and the following day, similar demonstrations were held in San Francisco, Philadelphia, and Ontario.

Rory McKay, a 20-year-old part-time UPS worker in Philadelphia, was hired in January. Less than 2 weeks after he started, his $19 hourly wage was cut to $15. “As you can see, a lot of us are pissed off,” McKay said, pointing to a small crowd of UPS workers and community supporters that had gathered outside the UPS headquarters in Philadelphia at 7:30am that morning. The workers were joined by several local elected leaders, including Philadelphia Councilmember Helen Gym.

“Even in the brisk freezing weather, it was good to see people come out and stand in solidarity,” said Richard Hooker Jr., the Secretary Treasurer and Principal Officer of Teamsters Local 623. “This [pay cut] was a strategic move by the company to go into bargaining next year with the lowest wage possible. If you start higher, you negotiate from there.”

“UPS started offering $19 an hour just to get people in the door,” said one speaker from Local 623 through the megaphone. “Now they’re only offering $15 to do the same work. How in the world does that make sense? You cannot make a living wage at UPS, but UPS can make a living wage off your back.”

Like many other companies that have profited from pandemic at-home shopping, UPS raked in record profits in 2021. The company’s revenue reached $97.29 billion in 2021, up 15% from 2020. UPS also announced price increases for consumers in 2022 – rates across ground, air, and international services were raised by an average of 5.9% in December, certainly contributing to expectations that the company will reach its 2023 financial target a year early.

Teamsters will be fighting for a new contract for UPS workers in 2023, shortly following the election of Sean O’Brien as their new union president. O’Brien represents a departure from the Hoffa labor dynasty for the Teamsters, and his election was in part fuelled by anger at Teamster leadership ratifying the previous contract in 2018, despite 54% of members opposing it. The contract included starting pay at just $13 an hour, less than non-union Amazon at the time. When the pandemic hit, UPS was forced to raise their starting wages to entice a new workforce.

In the next contract, UPS workers will be looking for more.

“[This demonstration] was a start. I’m not going to say that one demonstration will make UPS have a come-to-Jesus moment. But having these demonstrations nationwide will put the company on notice going into contract negotiations,” Hooker said. He added that UPS Teamsters should begin preparing themselves financially to take strike action if that becomes necessary.

“Yeah, I think we should fight for more than $19 [starting wage] in the next contract,” said McKay. “If we don’t, this is just going to happen all over again. You know, $19 becomes $17 becomes $15, and we’re back where we started. That can’t happen.”