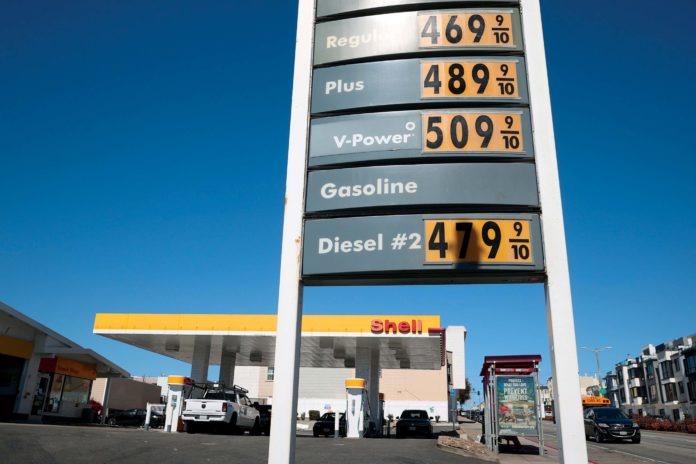 The price of food, gas and a whole array of essential goods have gone through the roof and are still rising. Fear about inflation has become the number one issue on the minds of workers as they peer into the murky future. It is also driving down Biden’s approval ratings. What is going on?

In October the Consumer Price Index rose 6.2% from its level a year ago. This is the sharpest increase since the 1990s. During the same time food prices rose 5.4%, gasoline prices rose 49.6% and fuel oil, which is used for industrial and domestic heating, rose 59%.

Together with spikes in home prices and rents, the ending of eviction moratoriums and the ending of COVID support payments, working people are being hit hard.

After months of the Biden administration and other commentators stating that inflation is a temporary by-product of COVID, it has not abated. In fact, it is accelerating and spreading to wider sectors of the economy. This opens up the possibility of a period of rising inflation.

At its most basic level, inflation can be described as too much money chasing too few goods. An excess of buyers allows corporations to raise the price of those goods and reap extra profits. This process can obviously be temporary or long-term. If it is short-term, then expanding the supply of available goods will solve the problem fairly quickly. The pandemic and the consequent supply chain disruptions are clearly short-term effects.

However, these short-term processes can develop into longer term trends. For example, the Trump tariffs on incoming goods, and the escalating conflicts between the U.S. and China and its effect on supply lines and computer chips are longer term factors which are also contributing to supply chain problems. For example, this has led to a shortage of new cars, driving up the price of used cars. Increased shipping costs have fed into rising food prices with the price of shipping a container rising from around $5,000 to $20,000 in some cases.

In recent months many economists have become concerned the effects will not be “temporary,” and that we could be entering a period of escalating inflation, which could have similar consequences to that of the 1970s. This could force a turnaround from the Biden administration and the Federal Reserve from supporting spending to stimulate the economy to raising interest rates. Higher interest rates will then cut across inflation by adding to the cost of borrowing money. But this will then cut across economic activity and make existing debt more expensive. This will lead to a wave of bankruptcies and start a new wave of debt implosions. In the present circumstances, a rapid rise in interest rates will set off a chain reaction, precipitating a recession. The New York Times writes: “If the trends persist, they [the Federal Reserve] will most likely come under growing pressure to hasten their plans to pull back economic support by ending their stimulative bond-buying program and raising interest rates from rock bottom sooner and more quickly.”

In the 1970s, inflation reached double-digits in the U.S., disrupting the normal functioning of the economy and society, massively affecting the poor and provoking a wave of militant labor struggles as the working class fought to raise wages in an attempt to catch up with rising prices. This is what capitalist experts fear most: a revived fighting labor movement that would shift the balance of power in the workplace affecting their long-term profits.

The immediate cause of the inflation spiral in the 1970s was a sharp and sustained rise in oil prices. This was combined with massive borrowing of the U.S. ruling class to fund the Vietnam war. This resulted in a major devaluation of the dollar and subsequent rising prices.

During the mid-1970s attempts were made to reduce inflation by a number of policies.  In the end, the Fed and Ronald Reagan, acting on behalf of the ruling class, sharply raised interest rates, which triggered a double-dip recession in the early 1980s. This was ultimately successful in purging inflation, but in the meantime led to a devastating fall in living standards for working class people. This was made worse as Reagan waged a relentless war against the labor movement and essential social programs that benefit the working class were savaged over subsequent decades.

These neoliberal policies meant multinational corporations were allowed to roam the globe in the search of cheaper labor, reorganizing trade to facilitate supply chains that massively increased their profits. It is these supply chains that collapsed under pressure from COVID trade disruptions.

Do Wage Increases Cause Inflation?

The failure of these fragile supply chains has precipitated the new rise of inflation. However, much of these early price rises are not because global corporations have to pay higher costs, but because their corporate CEO’s have seized an opportunity to use global market shortages to raise prices and make a heavy short-term profit.

However the dominant corporate narrative is that the main inflationary danger is workers seeking subsequent wage increases. There are many things wrong with this.

There is no direct link between wage increase and prices. A $1 wage increase does not cause a $1 price increase in a product. Wages are just one of many different costs of production and distribution. In some industries wages make a tiny proportion of the cost of a product.

Under capitalism prices cannot be arbitrarily set by a producer. Instead, they are determined by markets. Markets reflect the totality of all producers, and their relationship to the effective demands of buyers.

This is not a new argument. The bosses have always argued that wage increases can only result in them raising prices. But this argument has been refuted time and again.

The source of corporate profit is the exploitation by the bosses of the labor of “their” workers. The more they exploit labor, the higher their profits. Workers demanding a pay raise is just reducing the level of exploitation by their bosses. It is impossible for a wage increase to have a direct effect on prices. Instead, it has a direct effect on the relationship between wages and profits.  Prices are outside the hands of each individual boss. But what the bosses collectively have today are record levels of profits!

Blaming wage increases for inflation is only a self-serving argument for bosses to protect their profits. This is amplified by the corporate-owned media who have similar class interests and also rely on corporate advertising dollars to boost their profits. Their main concern is to prevent workers from understanding the real power they have in society as the primary producers of wealth.

Already, workers have begun to win wage increases over hazard pay and as bosses try to keep their workers from joining the “great resignation.” There have also been some important victories by workers going on strike.The bosses are terrified that this can lead to increased militancy by setting an example to other workers on how to fight back.

If the Biden administration is more concerned with stabilizing capitalism than defending workers living standards, then what policies are needed? The problem lies in the inner workings of capitalism.

Driving the economy into a recession by raising interest rates will lead to further misery for workers. What is needed is to take decision-making out of the hands of the huge corporations that dominate our society. A democratically planned economy could eliminate conflicts between “supply and demand” by balancing production with our needs. For example, a massive program of building quality affordable housing and taking big landlords into public ownership can massively reduce the cost of housing for ordinary people.

But to do this means challenging the power of the big corporations, and the Democrats will never do that. This can only be done by taking into public ownership of the huge corporations that have political power and putting it under the democratic control of society. To do that will necessitate building a new working-class movement and a mass working class party.