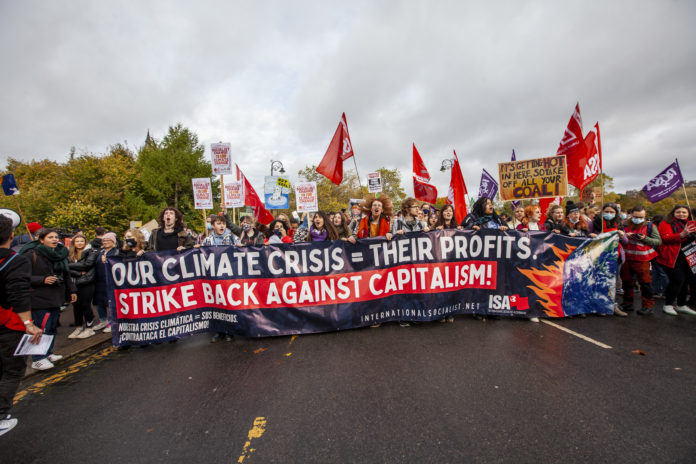 The vast majority of young people at the demonstrations this weekend had no illusions in the conference. They saw it for precisely what it is: an exercise in hollow gesturing. However, there is still a degree of confusion in the movement about precisely why COP26 will achieve nothing. It’s not simply political inaction or incompetence. It is because capitalist world leaders are diametrically opposed to any measure that would disrupt the profits of major corporations. They are not just slow moving or lazy, they are steadfastly committed to blocking any climate measures that would threaten the super rich or the stability of their system. Understanding this very simple fact will be a crucial lesson for the struggle to preserve life as we know it.

We cannot appeal to the better nature of Joe Biden or Boris Johnson and gently guide them toward sustainable solutions. The only way we can pry any victories out of the hands of the capitalist elite is if we threaten the survival of their system.

This is precisely the message 300 members of International Socialist Alternative (ISA), the Marxist international we are in solidarity with, delivered to Glasgow this week.

What Type of Movement?

Based on the Power of the World Working Class

A mass, international climate movement cannot limit itself to yearly days of action or lobbying politicians. We need a movement that can win, and that means first and foremost basing ourselves on the power of the world working class to change society.

As thousands chanted this past weekend, “climate change is a war of the rich against the poor!” We cannot allow billionaire greenwashers like Bill Gates (who has a carbon footprint 3,000 times bigger than the average person) or Jeff Bezos (whose trip to space produced more carbon dioxide in its first ten minutes than 30 average humans produce in one year) into our movement.

Any effective fight for an energy transformation, for affordable green housing, for fully funded fire services, for free public transit, or any number of critical climate demands has to be driven by the working class.

The billionaires and their representatives have structures and forums to discuss their response to the climate crisis: COP26 was one of them. We need our own. We need mass democratic discussions to determine a program for the movement, as well as ongoing organizational forums to determine strategy, tactics, and – crucially – elect accountable leadership. Importantly, unlike the structures of the super rich, ours will not exclude the masses of people in the neocolonial world currently being ravaged by climate disasters they played little role in creating.

As the COVID nightmare laid bare, it is the masses of the working class that are essential to running society, but we are not the ones that control it. We transport, educate, feed, and care for the world but we do not own it.

Young people, and increasingly wider sections of the working class, know that we cannot afford another meaningless set of non-binding half measures. The capitalist system, which relies on brutal exploitation of people and natural resources, is in total crisis.

Halting the race toward climate catastrophe means fighting for the socialist transformation of society. This is the message the ISA brought with relentless determination to the mass protests outside COP.

We distributed hundreds of pamphlets spelling out exactly what this would mean.

And we described how this could usher in a drastic reduction in emissions:

Whether or not we are ready for it, we are on track for a dramatic showdown between the international working class and the bloodthirsty billionaires. Winning that battle will have consequences for the whole of humanity, so our movements have to be prepared.

In the words of Scottish born revolutionary socialist James Connolly: “For our demands most moderate are, we only want the earth.”