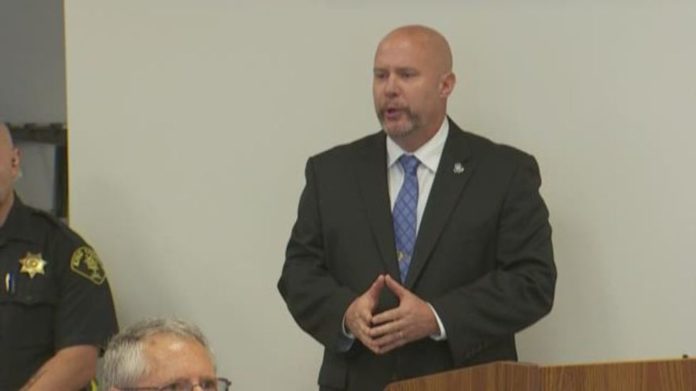 On Monday, the freshly re-elected Buckley City Councilmember and former SPOG President Ron Smith responded to the re-emergence of years’ worth of his own racist social media posts that led the Office of Police Accountability (OPA) to conclude that he’d engaged in “bias-based policing.”

Among these posts was one in which Smith posted a photo of himself getting ready to crack down on protesters at the 2017 May Day demonstrations. When one commenter said Smith’s goal should be to “cuff the councilmember,” he delightfully agreed – and later confirmed that the councilmember was Kshama Sawant.

Smith also made posts referring to undocumented immigrants as “illegals” and calling Islam a “religion of violence.” These disgusting comments from a former police officer and current elected official exemplify the fact that racist, biased policing is a norm, not an outlier – which is exactly why more than 20 million people participated in the Justice for George Floyd movement last summer.

In Seattle, the pressure of hundreds of thousands in the streets with the Justice for George Floyd movement was crucial in winning huge victories that summer. Not only did Kshama Sawant and our movement win a first-in-the-nation ban on police use of chemical weapons, 30,000 people signed a petition to put the Amazon Tax on the ballot – which under Kshama’s leadership directly resulted in winning a tax on Amazon and other big businesses amounting to $2 billion over the next decade for affordable housing.

Out of fear of the working class mobilizing to win even more, the right wing, with the assistance of the courts, is eager to step in and clamp down on this historic protest movement with racist fear-mongering. For example, In the trial of Kyle Rittenhouse, the judge just ruled that the people Rittenhouse shot cannot be referred to as his “victims” – but could be referred to as “looters” or “rioters”.  We need to defend the Black Lives Matter movement against these right-wing attacks.

Not only do we need to fight back against this racist re-writing of the Justice for George Floyd uprisings, we must push forward for real community control over the police. At the same time as defunding the police and taxing the rich to pay for social programs, we need democratically elected community oversight boards with hiring and firing power over the police and full authority to set policy. Join Kshama Solidarity Campaign supporters at a Party for Police Accountability event on Saturday at 5pm at Washington Hall to discuss how we defend Kshama Sawant from this right-wing recall and build the movement to end racist policing.

We need your help to defeat this recall – we only have five weeks left until election day, and we need to reach thousands more voters before then! Our grassroots campaign has had more than FIVE HUNDRED people volunteer with us already – can you join us at our Saturday Megacanvass event to help build this movement?