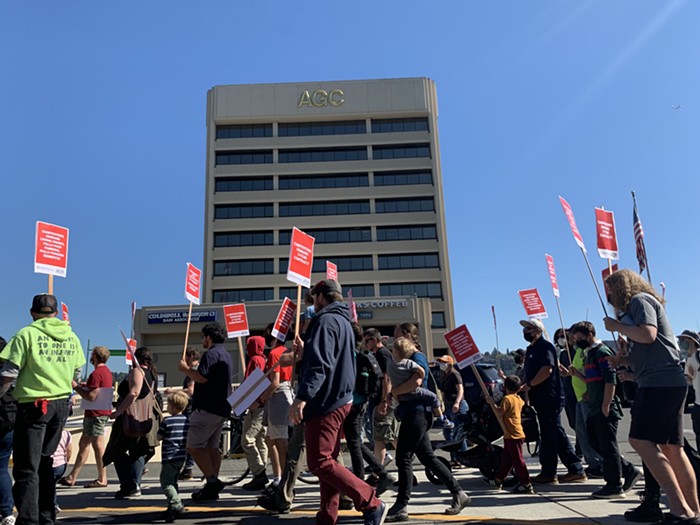 Coming on the heels of the courageous strike by Western Washington Carpenters last month, socialist Seattle City Councilmember Kshama Sawant unveiled an ordinance this week that would make construction bosses in Seattle pay 100 percent of the parking costs for their workers. Fully-paid parking has been one of the central demands not only of the union carpenters, in addition to family-supporting wages, fully-funded benefits, and improved protections against workplace harassment.

As a workers’ representative, Councilmember Sawant and her political organization, Socialist Alternative, expressed solidarity with striking carpenters from the start by sending statements of solidarity, repeatedly walking picket lines with the rank and file, holding a press conference with them to amplify their demands, and organizing a solidarity rally with other unions and working people.

Sawant’s ordinance for paid parking developed out of numerous discussions with rank-and-file carpenters and other construction workers, who for years have had to shoulder the burden of outrageous parking fees just in order to go to work every day. Like most working people in Seattle, construction workers have borne the brunt of the for-profit housing market that has caused rents and home prices to skyrocket. This, combined with an underfunded and inadequate public transit system, has meant that most construction workers spend hours each day commuting via car with their tools and heavy equipment from far outside the city in order to find a parking spot for their shift. This forces them to spend thousands of dollars of their wages every year in parking, while the contractors and other corporations amass unprecedented profits.

Throughout their strike, many rank-and-file carpenters expressed outrage at the insulting tentative agreements from the bosses, which offered only meagre increases to wages and parking benefits. Seeking to build on the momentum of the strike and open up an avenue for further victories, Councilmember Sawant’s office moved quickly to introduce the paid parking legislation. The demand quickly found an echo among workers: in just a few weeks time, over 1,100 people—400 of them construction workers—had signed the petition from Councilmember Sawant’s office to demand Seattle City Councilmembers support her legislation to require contractors to fully pay for construction worker parking. Councilmember Sawant’s office tabled outside multiple construction sites in Seattle and phonebanked the construction workers who signed the petition to mobilize them to testify in public comment to the City Council, all to overwhelmingly positive response. Many workers mentioned that they wished they could give public comment, but would be unable to because City Council meetings occur at 2:00 pm on Mondays, a time when the vast majority of working people are unable to attend. Over 350 construction workers and community members sent emails to the City Council in support of this demand.

A demand with such clear popularity among rank-and-file workers should be a no-brainer for any friend of the labor movement to support. And yet, not a single one of the self-described ‘progressive’ Democrats on the City Council—not even those who walked the picket lines with carpenters in their recent strike—has expressed support for the ordinance.

These types of bureaucratic maneuvers are nothing new in Seattle politics. Many of the Democratic politicians will walk picket lines for photo-ops, often in election years, but then use back-room machinations to hold the line for the bosses and prevent any real change from happening. By cowardly delaying the legislation, these politicians ensured that, until it passes, big contractors will get to continue pushing the cost of doing business onto their own workers.

In response to the Democrats’ shameful obstruction, the public testimony was nearly unanimously composed of union carpenters, electricians, ironworkers, teachers, working class renters, and other community members calling in support of Councilmember Sawant’s legislation, with many of them voicing outright disgust at the Democrats’ attempts to shut down debate.

“You folks who oppose this are out of touch with the boots on the ground rank-and-file workers, who lose upwards of $500 a month on parking.”  Wurz noted that she and other workers “are intensely disappointed with supposed leaders who can’t put aside party politics to support workers. The least you could do is make sure we’re not taxed to go to work.”

Unfortunately, the only public testimony in direct opposition to the legislation came from two trades union elected officers.

Monty Anderson, Executive Secretary of the Seattle Building Trades Council, resorted to using personal attacks against Sawant to undermine the demand by trades rank and file:

“You know, we collective bargain. We don’t need Councilwoman Sawant in the middle of our bargaining process—the contracts that we’re talking about are very unique, and nuanced between our employers and ourselves, and listen—we don’t need grandstanding.”

Monty Anderson was immediately followed by Matt Swanson, Political Director for the Carpenters Union, who also refused to voice any support for the legislation or the rank and file he is supposed to represent. Swanson also attempted to obfuscate the Democrats’ blatant attempt at shutting down discussion, by saying, “We are very excited to see that … really the entire council has been taking up this issue of parking”

Swanson effectively rejected the rank-and-file-driven effort by calling for respect “to the regular order” and the need to “achieve “consensus amongst all stakeholders.”

Who are the other “stakeholders” Swanson was referring to, if they aren’t unions or workers and their families? Unfortunately for construction workers, the “regular order” has utterly failed to provide them with fully-paid parking, and no amount of consensus-building will change the reality that wealthy contractors profit by offloading the cost of parking onto their own employees. If workers want to change that, they will have to get organized and fight back, not chase the illusion that the bosses will agree with them. Rank-and-file carpenters did just that in September, when they went on strike after rejecting four consecutive tentative agreements. During that fight, they had to struggle not only against the bosses’ ruthless opposition, but also their own union leaders, who repeatedly attempted to limit the scope and militancy of the strike, at one point going so far as canceling all pickets in response to independent protests organized by rank and file carpenters.

The shockingly out-of-touch public comments from high-salaried labor bureaucrats were immediately contrasted by numerous testimonies from rank-and-file construction workers, which painted a stark picture of the very real burden workers face every day:

“I’m mother to a sick child, and I currently pay thirty-one dollars a day for parking … it’s just like a second mortgage payment”

“It’s absolutely ludicrous that no one even gave this thing support … I do not know anyone on any jobsite that has not complained about this issue numerous times … when I moved here I was making bottom salary for apprentices, paying twenty dollars parking, which is cheap.  [It] completely wiped me out weekly. It cost me grocery money.  It cost me rent money.”

“we as workers are coming to you right now and telling you what we need, and you’re not paying attention. I’m disgusted.”

Following the meeting, over 130 people emailed the City Council opposing their obstruction.

Taylor Werner, an apprentice electrician and single mother, sent an email to the City Council expressing her shock at the actions of the eight Democratic Councilmembers in delaying the legislation:

“Today, I left work an hour early so that I could be on call during the city council meeting, to make public comment on a piece of legislation that is incredibly popular, incredibly well publicized in a very short time, and would have a dramatic effect on the lives of non-traditional construction workers like myself. Groups that have historically been gate-kept, and excluded from the life-changing benefits that this largely unionized industry offers.

I was utterly shocked when other council members refused to hear Councilmember Sawant’s proposal for an amendment to the agenda. When no one would second her motion, I saw it as a transparently coordinated effort to exclude the one council member, as far as I can tell, who is presenting actionable steps towards improving the lot of working people in this city. A city which, in my 32 years as a Seattle native, has become astronomically more disparate amongst classes.”

Workers should not be surprised with the Democrats’ action on Monday. While they are often forced to provide lip service under pressure from working class anger, and in Seattle from Sawant and our grassroots organizing,  they will only concede when working people force them to. All of the biggest victories won by Seattle workers in recent years—the $15 minimum wage, the Amazon Tax, countless renters’ rights victories—have only been possible with the help of fighting movements that based themselves on the independent organization of workers and the oppressed—not backroom deals with the bosses and their representatives.

These victories also would not have been possible without the office of Socialist City Councilmember Kshama Sawant, who has used her position as an elected workers’ representative to stand unapologetically with movements of working people and amplify their demands in the halls of power.

The demand for fully paid parking for all Seattle construction workers represents a direct threat to the profits of the wealthy contractor bosses, who have long benefited from pushing the cost of parking onto the backs of their own employees. The bosses and their representatives in City Hall will not concede this demand without a fight—winning will require building a movement that draws together unionized and non-unionized construction workers, workers from other industries, socialists, and broader community members in a united struggle.

As #Striketober enters full swing with over 10,000 John Deere workers on strike and 60,000 IATSE and 24,000 Kaiser Permanente workers preparing to potentially join them, it is clear that working people all over the country are fed up with low wages and substandard working conditions.  Winning real victories like fully paid parking will require that workers get organized independently of the Democratic party and Business Unionist labor leaders, and instead elect leaderships that are accountable to the rank and file, and who base themselves on a militant, class-struggle approach to winning victories for workers—not back-room deals with the bosses.