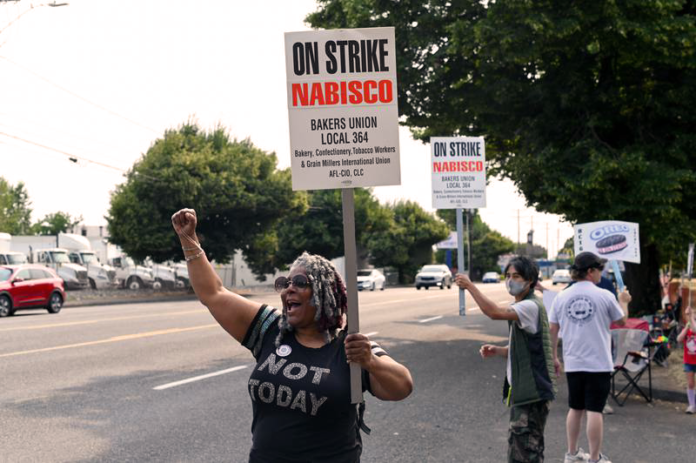 Chicago Socialist Alternative members joined BCTGM strikers on the picket line at Nabisco/Mondelez South side bakery throughout their grueling month-long strike. The Nabisco strikers showed the same serious and growing consciousness among workers that we saw on the Frito Lay picket line. After a year and a half of forced 12 and 16-hour shifts as essential workers under the pandemic, and faced with management proposals to make these conditions worse by introducing contract language around “flexibility” that would have taken out existing rules on overtime pay, workers at both Frito Lay and Nabisco decided that enough was enough.

Nabisco bakers went on strike for the first time since 1969, and put a stop to the worst of these changes after weeks of striking. However, given the strength of their strike, under conditions of a labor shortage and while retailers’ shelves were empty of Nabisco products, many workers believe an opportunity was missed here, and believe that the union could have won an end to these brutally long shifts, which are sometimes seven days a week, and rehiring of the hundreds of workers who were laid off under corporate restructuring during the past two contracts.

A History Of Concessions

The Bakery, Confectionery, Tobacco Workers and Grain Millers (BCTGM) International Union Local 1 represents more than 30 bakeries and candy factories in the Chicago area. This is an industry that has taken hit after hit due to successive corporate restructurings and offshoring, and over the years BCTGM has done little to fight back. Striking Nabisco/Mondelez workers spoke of losing 600 co-workers to a massive layoff in 2016. Soon afterwards the remaining workforce, many of whom have 20, 30 or more years with the company, saw the union bargain away their defined benefit pension plan, replacing it with an insecure, market-dependent 401k plan – a serious and lasting defeat. Most recently, workers experienced the hellish conditions of COVID where “everyone got sick, and they just kept making us work more hours to pick up the slack.” Nabisco offered only 10 paid sick days due to COVID. If you were sick longer, you went unpaid and risked plunging yourself and your family into debt.

On most days of this month-long strike, no union officials were seen on the picket line. With no lead from the union, workers’ views on the situation varied widely, with some “just wanting a little more” while others, knowing that they created the company’s huge pandemic profits, recognized that the bosses could well afford to pay them overtime, livable wages, healthcare and to hire back the 600 workers so they don’t have to work the current staff “to death.”

Many workers related that they were unclear what the union’s strategy was beyond staying out “one day longer.” When workers wanted to take more militant action, for example suggesting that they block deliveries from being made and coordinate actions with other unions, the union leadership acted as a brake upon this mood, threatening that “if anyone gets arrested, you won’t be able to picket at all.”

It was rumored that scab workers were being paid $5,000 bonuses on top of getting $30 to $40 an hour while working. Early in the strike, pickets only saw about 12 scabs going in for each shift, which according to the striking workers would only have allowed one production line to be opened out of the six they usually have.

Strikes Need a Strategy to Win

Without authorization from BCTGM officials, one worker went to the Hilton hotel where the scab workers were being housed by the company, and shamed them as they left for work. But as the strike wore on, unfortunately a growing number of workers began to cross the line and go into work. Workers on the picket line could all list these scabs by name, and even put up a sign with the scabs’ full names on it facing the factory entrance. But these tactics clearly weren’t enough to win.

Also, during the strike, workers’ healthcare expired, leaving them reliant upon one month of COBRA after which they would be without coverage. This highlights very clearly why organized labor needs to lead the way in eliminating this ever-present threat by building a mass movement to win Medicare For All.

But for most of the Nabisco strikers, when after a month on strike, the company offered a compromise settlement, backing off on their worst demands on overtime pay and dangling a $5,000 signing bonus into the bargain – most workers clearly felt great pressure to accept it.

Workers are Willing to Fight

It didn’t have to end this way. Nabisco workers were more than willing to fight. In fact, at a picket line rally organized by BCTGM officials, the union’s international president Anthony Shelton was interrupted by several workers who wanted to know the union’s strategy to win, how they could escalate the strike tactics, and why the union has a history of losing concessions to the bosses. Shelton’s response was that he had to keep the union’s tactics secret from the bosses. No striker that Socialist Alternative spoke to ever found out what these secret tactics were.

In this struggle for more militant and effective tactics, local leadership could have played a key role. This is what happened at the Portland, Oregon bakery, which was the first to go on strike and where local leadership was open to active support from other unions and the community. In Portland, not only delivery trucks but even train tracks were blocked to prevent deliveries of raw materials. Workers and community members led noisy demonstrations in grocery stores and at street corners, blocking traffic and doing everything they could to raise the profile of the strike.

Far more could have been done in Chicago, where the union local is far bigger and the labor movement stronger. Mondelez’ world headquarters are in downtown Chicago yet no rallies or demonstrations were held there, despite this demand being raised on the picket line. Instead, workers were treated to long shifts on the line, watching delivery trucks come and go, even while speculating that many of these trucks were empty and being used to demoralize them as though production had not been interrupted.

When the Portland local voted down the compromise contract, BCTGM Local 1 told Chicago workers that this was because the Portland workers were “unrealistically” demanding the restoration of the pensions lost in 2017. This wasn’t the case; Portland workers were justifiably suspicious of the new contract language which creates “weekend crews” to get around paying overtime, and which has been greeted by the company as giving it the flexibility it needs. Notably, Local 1 refused to share the Tentative Agreement (TA) on the picket line, insisting that workers could only see it at the meeting where they were being told to vote to accept it.

Socialist Alternative was present at this rushed vote in Chicago, explaining to workers why their union siblings in Portland had voted against the contract, and encouraging them to insist on getting more time to study and discuss the TA and make an informed decision. While rank-and-file workers welcomed us, union staff yelled that we were “betraying” the union and tried to prevent us talking to anyone. Once inside the union hall, workers were given very little time to read or discuss the contract, and were denied any democratic discussion on why Portland had overwhelmingly rejected it. Under these conditions and with no alternative on offer except to continue to strike indefinitely, a majority of Nabisco workers across the country voted to accept the contract.

The new contract provides for a 2.25% raise in 2021 and a 60 cent hourly raise for the next three years, and no changes to the healthcare system. Significantly, Nabisco offered a $5,000 bonus to workers if they agreed to the contract immediately. However, the call from workers for an end to the crushing 12- to 16-hour weekend shifts which have become normalized during the pandemic, remained unaddressed. Instead of ending mandatory overtime, the company can create “weekend crews” whose pay will fall far short of what current workers made on overtime. Mondelez has boasted that this will give the company “more flexibility” but there is nothing in the new agreement to end the practice of forcing workers to work 12 and 16 hour shifts if the company fails to hire enough new workers.

How Can Socialists and the Left Move Workers’ Struggles Forward?

The Nabisco strike raises many questions for the workers’ movement. With a national labor shortage and support for unions at an all-time high, there was no reason for the union to treat this as a defensive strike. This was the time to make bold demands and force this massively profitable multinational to agree to raises that would increase workers’ living standards, shorten working hours, rehire hundreds of laid-off workers and rebuild the pension plan.

Instead, after a month-long strike, the union agreed to a status quo contract with raises that fall far short of the rate at which the costs of rent, food, transportation and other necessities are increasing. In other words, the union agreed to cuts in pay which will continue over the life of the contract. This concessionary contract is typical of what has been seen in most strikes since the beginning of the pandemic. Multiple unions have accepted contracts that don’t raise workers’ living standards but fall far short of the rate at which prices are increasing, while union leaders have actively attacked workers taking militant actions. These leaders run their unions in a top-down fashion with minimal involvement of the rank-and-file, are far too ready to accept compromises and concessions, and are unwilling to lead militant struggle.

What’s needed are short, effective strikes, not wars of attrition in which workers are worn down and become demoralized. Instead, as we also saw at the recent strike of SEIU Local 73 against Cook County, significant numbers of workers, unable to pay their bills and seeing no way forward, went back to work – leaving only the most determined strikers manning the picket lines and creating bitter divisions amongst the workers.

To escalate the fight with Mondelez and combat this pessimistic mood we raised the idea of organizing a demonstration at Mondelez’s world headquarters in downtown Chicago, just a few miles away from the picket line. Similar actions were already being carried out by community supporters in Portland. Democratic Socialists of America, with its hundreds of members, could have intervened on a far bigger scale, including organizing that demonstration with or without the support of BCTGM leaders. This could have had a real impact on the mood of strikers and on the progress of the strike. Socialists’ primary orientation should not be to the labor leadership. Socialists must orient towards the working class itself, building on its existing consciousness that it is exploited, and raise the expectations of what strikes can win. Socialists can then bring to bear their historical experience with strategy and tactics that can escalate and expand workers’ power.

An urgent debate is needed on how the left and other community supporters can intervene to strengthen strikes and win real gains for workers. We are in a moment of labor shortage, this is an advantageous situation for workers which will not last indefinitely.