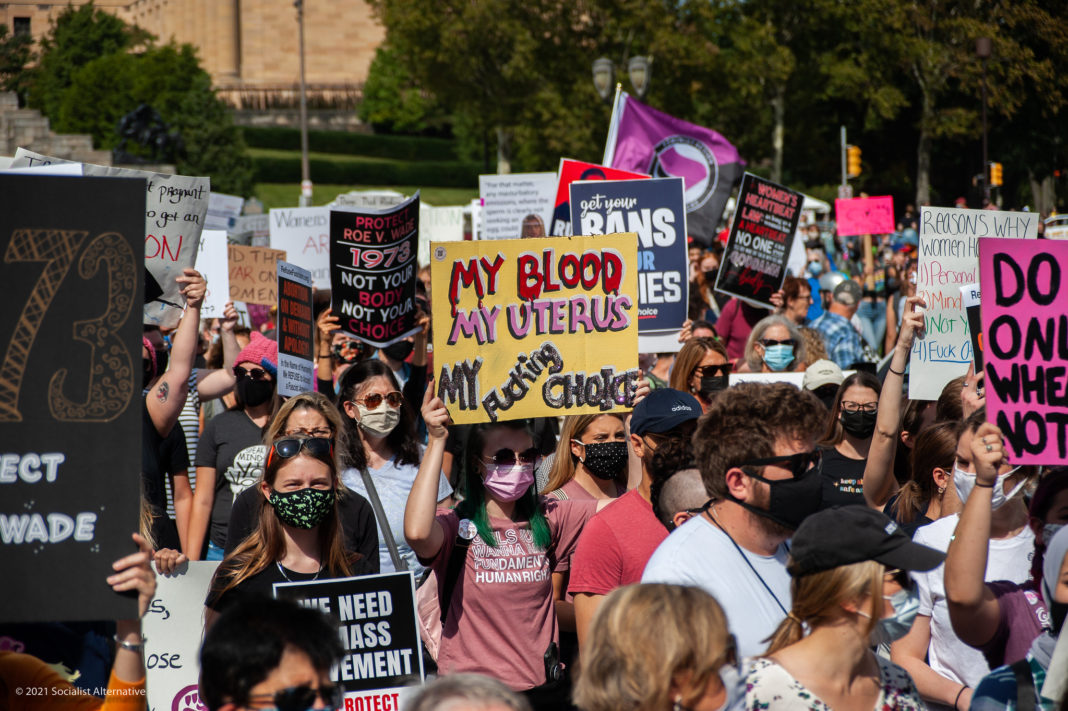 We, the signatories to this letter, call on the national and chapter leaderships of DSA and YDSA to:

Click here to add your name to this letter

Reproductive rights have been attacked by the right wing for decades, but never has the right to an abortion been endangered the way it is currently. With Roe v. Wade effectively overturned in Texas by the abortion ban, women are flooding into abortion clinics in neighboring states. The ban may only apply to Texas, but the right wing will be emboldened by it. They will be particularly delighted by the fact there was virtually no response to it in the form of protest action from the liberal women’s organizations, Democratic Party, or the left as this gives them free reign to export the Texas model across the country. The Supreme Court will hear the Dobbs case in December, which is an opportunity for the six conservatives on the court to officially overturn Roe. If that happens, abortion would become illegal in 22 states, virtually overnight.

The defeat of Roe, should it come to pass, will represent a personal tragedy for hundreds of thousands of working class women, non-binary, and trans people every year who will be forced to spend precious resources traveling to a state with legal abortions, or who will be forced to carry unwanted pregnancies to term, or who will risk their lives with a potentially unsafe procedure. It will also represent a serious defeat for women and the working class that will have lasting implications. If Roe goes down without any real fight, this could have a profound effect on the belief of many young people that fighting back can deliver us any form of change. This type of defeatist attitude gaining any foothold among young people will be devastating for the left and could accelerate the growth of the right.

There is intense and widespread outrage at the Texas abortion ban, but the traditional women’s organizations like NOW, NARAL and Planned Parenthood have proven themselves incapable and/or unwilling to provide a lead in building a mass, grassroots movement to oppose the attacks on abortion rights. Despite the Biden administration’s assurances that they support the codification of Roe v. Wade in federal law, so far the Democrats have not taken the necessary steps to do this when it matters most to the millions of Texans who can no longer access abortion. The Biden administration has filed a legal challenge to the abortion ban, as have other parties, but these will take months and years to wind their way through a judicial system that is stacked with conservative judges.

It is abundantly clear that the Democratic Party and liberal women’s organizations are simply not interested in marshalling the resources that would be necessary to immediately push back on this right wing assault, despite majority support in poll after poll for legal abortion and the anger of millions at this evident assault against Roe. If an organized and powerful opposition to the right wing is to develop in support of abortion rights, it will have to be led by socialists.

In the context of a wider crisis of leadership of the working class, DSA with our nearly 100,000 strong membership and increased profile over recent years has the potential organizing power, and the responsibility to the working class, to take the lead and bring millions into a mass movement to defend abortion rights. Millions support abortion rights, but are not necessarily activists, nor socialists. However, it’s through participating in an organized mass movement that has the clear potential to win that non-activist working class people can be convinced of the need to fight for reproductive rights and join the broader fight against capitalism and for socialism.

Roe v. Wade itself was won not because of a forward thinking Supreme Court, but because of the pressure of a powerful and sustained mass movement, which socialists played a major role in. In Washington state, socialist feminist groups organized mass support for a 1970 referendum to legalize abortion, which won 56% to 44%. By the time Roe was decided, many states had some form of legalized abortion, and the Supreme Court was forced to weigh an anti-abortion decision against the consequence of provoking the existing mass movement of millions of women. The methods that the women’s movement of the 1960s-70s used need to be studied and updated for a mass movement today. Protests and marches, speakouts, demonstrations at statehouses, direct action, and building grassroots support by determined canvassing and organizing mass meetings–these are some of the tactics that a mass movement needs to win. Critically, the women’s movement built organizations with a degree of stability that constituted a home for the movement between explosions of struggle, where strategy could be debated and plans laid out.

DSA today arguably has a better starting point to launch a serious campaign to defend the right to abortion than the women’s movement that won Roe. There was no preexisting single organization of 100,000 socialists at the outset of that movement, and legalized abortion is a majority position, unlike in the 1960s. Furthermore, DSA’s connections to the labor movement are crucial at a time when women now make up nearly half of union workers. Not only do we have the responsibility to help lead the fight to defend abortion rights, but a mass movement to defend and extend reproductive rights would be a real opportunity to dramatically increase the ranks of the socialist movement and DSA with young working class fighters.