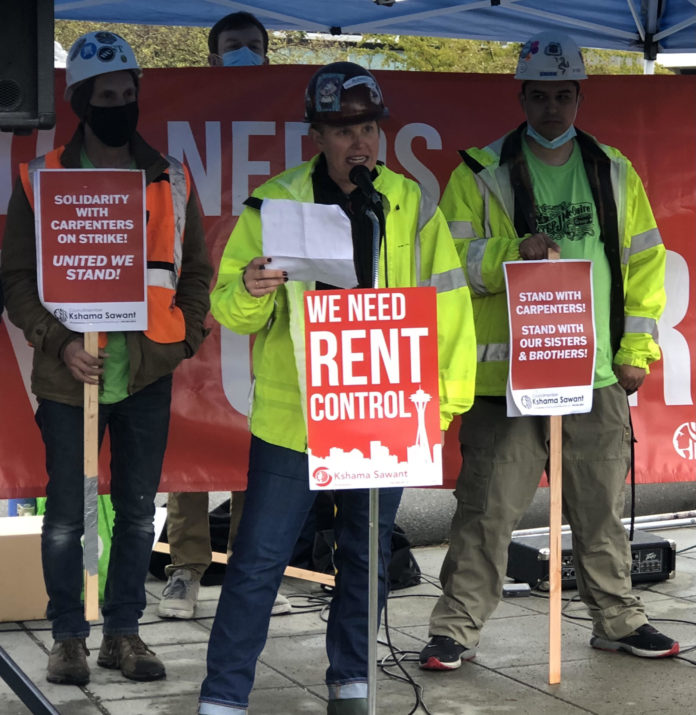 Below is the text of a speech delivered by union carpenter Nina Wurz at the Sept. 18, 2021 “Rent Control Now” rally!

I’m a 33 year old queer journeyman carpenter out of Local 30, but my number one title is mom.

I’m here today because the parallels between the carpenters’ fight for better wages and the struggles of renters in the greater Seattle area are too great to ignore.

Right now the Carpenters’ Union is on strike for higher wages and better funding of our healthcare plan and pensions. Working families fought for a $15 minimum wage in 2014 and are fighting for rent control today. We’re both responding to the same explosion in rent and housing costs in Seattle and in cities all across the country. Home prices here have gone up 93% in the last decade, rents 92%. A marginal annual wage increase is not keeping up with those costs, much less the rising costs of childcare or goods.

The employers would have you believe we’re making great wages already. They want workers who fought long and hard for a $15 minimum wage to look at our $46/hour as greedy while ignoring that the CEOs of businesses we work for take home upwards of $22,000/hour. Big business literally makes billions off our backs while we carpenters can’t afford to raise a family in the city we build, and minimum wage workers can’t afford to live in the city they work.

With rents so high many of these carpenters who make quote good family wages commute up to two hours each way. That’s four hours on the road. Ten hours at work. And if you sleep eight hours, you’re left with 2 hours with your family. I would not call two hours a day the product of “good family wages.” The overwhelming majority of carpenters live far outside the city. Think Centralia far or on the other side of the Cascades far. And if we truly were earning good family wages, why do so many of us feel no choice but to work overtime once we finally get to work? Nearly every job’s culture pushes overtime, and the repercussions for refusing can mean losing your job.

Too often I am faced with the choice of working overtime to please the boss or leaving at 8 hours to take care of my child. I run the risk as a woman of being seen as not taking my work seriously. Yes, even working a demanding job a full 40 hours a week isn’t enough to earn their respect. When men take the time, they’re celebrated for stepping up as fathers, but women always must contend with the expectation that we are the primary parent for childcare. So the choice working moms must make is being seen as a good mom or a good worker but never both.  This makes it hard to advance in the workplace and make the higher wages we need to keep up with childcare and housing costs. It’s no longer true that a single income carpenter can support a family in Seattle, and with these increasing housing costs, dual income households struggle to keep up. Single parents get the worst of all worlds which is why many spouses stay in abusive marriages or workers stay in toxic work environments. And if a union carpenter cannot keep up with housing costs, how on earth are minimum wage workers supposed to do it?

We carpenters are asking for transparency regarding contract negotiations. After months of negotiations, after we voted no on the fourth tentative agreement, carpenters were finally authorized strike and fight for real improvements in the contract. What we weren’t told was that only 17% of union carpenters are on strikable jobs due to “no strike clauses”  that were signed behind closed doors. This is already such an uphill battle, and now the media is trying to slander dissenting voices. I see accusations that our group is only here to divide the union and spew sexist comments about our leadership. What I want to know is why is the sudden interest in condemning sexism in the labor movement? Why don’t I see contracts that require sexual harassment training or programs like this in our apprenticeship? Where is the paid parental leave? Why am I still called a Sister in the Brotherhood?

I face sexism every day at work, and yeah, I hear disturbing sexual comments that have no place at work, and no place in the labor movement. That’s why our rank and file caucus the Peter J McGuire Group supports the rights and dignity of all workers free from discrimination, harassment or assault based on race, gender, sex, sexual orientation, national origin, and religion. Derogatory comments and statements get promptly addressed. We’ve had multiple conversations as rank and file union members  to work towards a better understanding of discriminatory language and why it’s wrong. I can’t say I’ve ever seen that happen before in my time as a union carpenter. We’re going to have to win this strike with or without union leadership.

But higher wages is only half the struggle. Low wages and high rents are the vise that squeezes the working class of its earnings. If wages go up but rent does, too, this doesn’t change the realities of working people. We’d still have to suffer long commutes, constant overtime, and the shrinking window of a life worth living. That is why we want to show solidarity and support for rent control. Working people of all kinds in the greater Seattle area are being crushed by the cost of living, student loan and medical debt, the ongoing climate crisis, and more. Stemming the rising costs of rent and home prices will transform these barely scraping by wages into good family wages, not just for carpenters but for everyone.