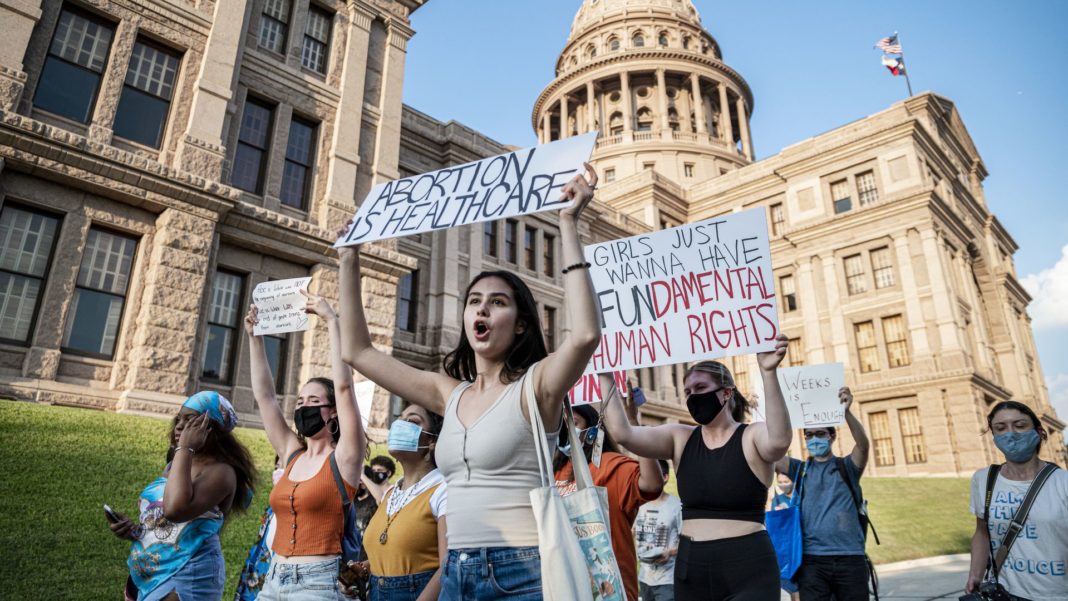 Virtually overnight, abortion is banned in Texas. Every one of the already-scarce clinics in the state has halted abortion services. Neighboring states like Louisiana and Arkansas are already seeing an increase in abortion patients from Texas. Millions of women are now terrified that if they want to terminate a pregnancy, they may be forced to turn to certain extremely dangerous “self-managed” abortion procedures.

This vicious attack comes after the Supreme Court denied an emergency stay on Texas’ archaic abortion law known as Senate Bill 8, allowing it to go into effect immediately.

Senate Bill 8 prohibits all abortions after a fetal heartbeat can be detected – typically between five and six weeks into a pregnancy. Between 85 and 95 percent of abortions take place after this time period – for most, this is before they would know they are pregnant. There are no exceptions for cases of incest or sexual assault.

If that wasn’t barbaric enough, what’s especially staggering about this bill is its mechanism of enforcement. While for years a dozen Republican states have passed similar “heartbeat” bills that have been halted by the courts, Texas’ law shifts enforcement from the state to private citizens. This law deputizes anti-abortion vigilantes who can now file civil lawsuits against abortion providers or anyone guilty of “aiding and abetting” an abortion, for a bounty of up to $10,000 per procedure. The burden of proof that someone “aided and abetted” an abortion is abysmal and even an Uber driver who took someone to an abortion appointment could be sued.

The threat of Roe v Wade being overturned has hung over our heads in recent years as an unhinged, religious zealot and an ultra-conservative sexual predator were appointed to the Supreme Court by Trump with no fightback from Democrats. Now that the highly undemocratic Supreme Court has shown its willingness to cave to right-wing, anti-abortion fanatics, the outlook for the upcoming Dobbs v Jackson Women’s Health Organization case, which will rule on whether states can ban abortion after 15 weeks, looks much more grim.

Numerous “trigger bills” have been passed by Republican legislatures that would take effect if the court weakens Roe, and the Texas ban is the loophole they’ve been praying for. Pro-life lobbyists are already reaching out to Texas groups for help drafting similar legislation and the blueprint from Texas could soon be exported to dozens of states.

While working people, and young women in particular, are enraged, there is a stunning lack of political leadership to channel 70% of Americans’ opposition to abortion restrictions into action. Major reproductive rights organizations have released TikToks, but issued no calls to action.

After a brief moment of shock and surprise at abortion being suddenly banned, it is clear to millions of people in Texas and across the country that mass protests and even a coordinated day of action is needed to fight back to defend reproductive and women’s rights.

Stand Up, Fight Back

We are staring down the most serious attacks on women’s reproductive rights in decades, however the situation is by no means futile. We can protect Roe and guarantee legal abortions nationwide, but it will require building a mass movement on the scale of the women’s movement in the 1960’s/70’s that won Roe in the first place. Roe v Wade was won in 1973 in spite of a conservative Supreme Court and President Richard Nixon. The country was rocked by mass mobilizations, strikes, and radical grassroots organizations engaged in direct action.

This is what we need today. Our movement will need to place enormous pressure on the Democrats who control the Presidency and Congress to act, as well as the Supreme Court who are gearing up to decide on Dobbs.

A month before winning the presidency, then candidate Joe Biden pledged to make Roe “the law of the land.” Two days after his inauguration, Biden doubled down on this promise to codify Roe v Wade, ensuring that the Democrats would pass legislation at a national level guaranteeing legal abortions. Now, as the rubber meets the road, and with control of the Presidency and Congress, Joe Biden and the Democrats have no excuse not to make good on this pledge.

We need to demand that the Democrats take action. Among many other unfulfilled promises, they’ve so far failed to enact a federal $15/hour minimum wage, enact sweeping climate legislation, protect union rights, raise the corporate tax rate, or restore federal funding to Planned Parenthood. Unless a mass movement is built and immense pressure is brought to bear on the Biden administration, we can add protecting abortion rights to this list.

The Democratic leadership should do whatever it takes to enact sweeping protections for abortion rights. They can act now to write Roe into law, but as we’ve seen they’ll use any excuse in the book not to act. We cannot give them an inch of room to get around this, we need mass protests and walkouts to demand that the Democrats immediately codify Roe. Progressives in Congress should use every bit of leverage they have to demand the establishment take action. On top of this, we need to be prepared for mass demonstrations and direct action directed at the Supreme Court as they prepare to make a decision in Dobbs. In determining the tactics for our movement we can look to the recent women’s movement in Poland for inspiration where women organized a mass strike to protect abortion rights.

Our struggle for women’s liberation needs to go beyond the question of access to free, safe, and legal abortion. This ban and others like it will impact poor and working-class women the most, imposing desperation on top of an already desperate housing crisis and childcare crisis. We need a socialist feminist struggle for free, high quality reproductive care including universal childcare, rent control and high quality, publicly owned housing. We need an end to health care profiteering and an immediate transition to Medicare for All. A socialist feminist struggle has to take up the struggle against racism, transphobia, and terror against immigrants as all forms of oppression serve only to divide the working class from one another.