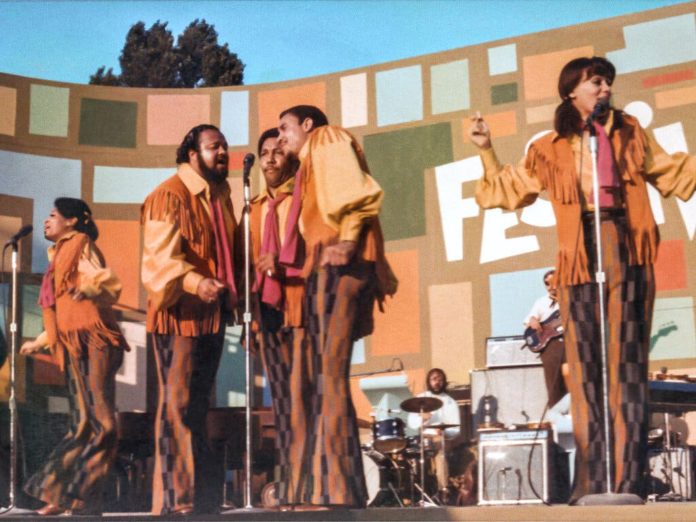 Harlem, New York – In the summer of 1969, two historic musical festivals took place that would have epic proportions for the course of musical history and define one of the most politically turbulent times in U.S. history. The 1960s were a decade of revolutionary and counter-revolutionary events that found an expression in the music of the day. One of the festivals you’ve heard of – Woodstock – would become iconic and celebrated for the performances by Jimi Hendrix, Janis Joplin, The Who, and so many more legendary bands and artists.

The second event, the Harlem Cultural Festival, took place over six weeks, from June 29 to August 24 at Mount Morris Park in Harlem, known as the mecca of Black America, highlighted by the stunning performances from Gladys Knight & the Pips, Sly and The Family Stone, a young Stevie Wonder, the high priestess of soul, Nina Simone, the Queen of Gospel, Mahalia Jackson, Blues icon, BB King, and countless others. Tragically, the Harlem Cultural Festival lived in obscurity unknown to the broader public outside of snippets of Nina Simone’s performance on YouTube and those that were there for the festival until now.

The Summer of Soul (…Or, When the Revolution Could Not Be Televised) encapsulates a vital period for the struggle against racism and capitalism in the Black America. Even after having luminaries such as Martin Luther King, Jr., Malcolm X, and Fred Hampton assassinated, there was a tremendous hope and willingness to struggle for change. With it’s best leaders killed, the movement was decapitated and this documentary shows the frustration and passion of this mood. For this generation of music lovers, radicalized workers and youth, the Harlem Cultural Festival will provide valuable lessons in understanding consciousness, political organizing, cultural shifts, and rhythm of social movements set to pulsalating beat and groove.

The six-week festival was filmed but never publicly released, though there were one-hour specials televised by a local T.V. station in New York City. After the tapes had languished for over 50 years, Ahmir Khalib Thompson, better known to the world as Questlove, founding member of the legendary Roots crew, was able to secure the footage.

The festival was organized and hosted by nightclub singer Tony Lawerence with corporate sponsorship by Maxwell House coffee that saw this as a profit and consumer boom in communities of color. It was also enthusiastically supported by Republican New York City Mayor John Lindsay, dubbed “Blue-eyed Soul Brother” by Tony Lawerence.

Lindsay was a liberal Republican – I know, a shocking revelation by today’s political standards. He was up for re-election and supported anti-poverty programs in the ghettos of New York City following the urban rebellions after the assassination of Dr. King in 1968. Lindsay aimed to leverage his popularity among Blacks, Puerto Ricans, and Jews to an election victory while alienating white workers still residing in the city.

It is estimated that 300,000 people, mainly Black and brown workers, poor and youth, attended the six consecutive Sundays. Each Sunday encompassed a musical theme like Popular music (Pop), Blues, Rhythm & Blues (R&B), Gospel, Funk, Jazz. The festival was a microcosm of the political, economic, and cultural shifts in Harlem and across the country in 1969.

A New Day and New Challenges

The year 1969 would be a critical and evolving period for the radical Black freedom movement and overall class struggle across the country and world. The decade was defined by revolution and counter-revolution; the documentary highlights the public assassinations of John and Bobby Kennedy, Malcolm X, and Dr. Martin Luther King, Jr. The conservative, law and order, anti-communist Richard Nixon took office in January 1969. Nixon continued to devote resources to dismantle and demobilize the radical social movements, Black organizations, and revolutionary leadership. To illustrate the reach of the counter-revolutionary agenda, the documentary showcases the arrest and criminal indictments of 21 Harlem branch Black Panther Party members in 1969 that included Afeni Shakur, the mother of Hip-Hop icon Tupac Shakur.

The mass urban rebellions like in Harlem and Newark were described by the Kerner Commission as the repercussions of federal government neglect and racism in America’s urban centers. Harlem was particularly important. The center of Black America politically, socially, and culturally, Harlem was also shifting with a devastating heroin epidemic that grabbed the whole community, economic depression, endemic violence, and a movement against racism and capitalism in crisis.

Despite these harsh realities, the Harlem community had a vibrant political and cultural consciousness; the ideas of Black Power were a dominant feature of the public discourse and the political framework alongside the southern Civil Rights movement. For years in America’s urban centers, the ideas of Black Power were rejecting the white and Black civil rights organization’s liberal reformist policies and politics of the time that did not end the horrendous conditions in the ghettos across the country.

The question of leadership would be crucial following the murder of Dr. King. The festival would mark the arrival of Jesse Jackson as a public figure who had worked with Dr.King in Operation Breadbasket in Chicago, Illinois. Jackson was young, hip, and charismatic to usher a Black politics that spoke to the moment and festival.

What was on the horizon after Dr.King’s assinssination and violent counter-revolution against the radical features of the Black freedom movement was the ascendancy of a Black middle-class reformist leadership tied to the two-party system and Wall Street agenda.

The early development of the new Black mis-leadership class would emerge with their support of  President Richard Nixon’s Black capitalism initiative and political split at the historic 1972 Gary Convention. There, Black Democratic party elected officials like future Detroit Mayor Coleman Young led his delegation out of the convention during a politically contentious debate with Black nationalist forces throughout the convention. The presence of Jesse Jackson and New York’s Al Sharpton in the documentary is a bit startling because of the role they would play in Black and national politics for the next 40 years as an overall accommodating voice to the agenda of capitalism.

The diasporic dimensions of the festival were stunning as Questlove provides audiences the privilege to see the performances by percussionist Ray Barretto and Ramón “Mongo” Santamaría. The diasporic nature of the struggle and rhythms are felt and the Afro-Latinx and Nuryican working-class and youth have a clear presence at the festival, punctuated by the local organizing of the Young Lords Organization that populated East Harlem (my hometown). The shift in politics and cultural trends was at the center of the six weeks. The word negro was discarded for Black as a political and cultural identifier of a mass of people denied their humanity by racial oppression and capitalist exploitation for generations. The idea of solidarity, common struggle against oppression, and the continent of Africa was a key ingredient to the music. In fashion, language, sound, hairstyles, and presentation, Black workers and youth would set a new paradigm that would define 1969 and beyond.

Whitey On The Moon

“Taxes takin’ my whole damn check, The junkies make me a nervous wreck, The price of food is goin’ up

In recent days, the despised billionaire class members Richard Branson, Elon Musk, and Jeff Bezos took a trip out of space to the utter dismay of radicalized workers and youth facing economic distress, COVID-19, environmental destruction, and daily questions about where our world is headed.

On July 20, 1969, amid the festival, U.S. astronauts Neil Armstrong and Buzz Aldrin landed on the Moon in front of 650 million watchful eyes; the Moon landing was captured as part of the Cold War with the Stalinized Soviet Union for global hegemony and power.

News reporters across the country sought reaction from various communities. The people of Harlem and festival attendees were clear and candid; the documentary captures the robust response of disdain, anger, and the economic wastefulness of the Moon landing while ordinary working people, poor, and Blacks lacked essential resources to survive daily. From 1969 to today, the corrosive profit-driven system of capitalism has rendered the working class, poor, and oppressed disposable.

Why the Festival Matters

As an attendee stated about the festival over 50 years later, “I wouldn’t believe it if I was not there to witness it.” As he was making that statement, tears began to roll down his cheeks as he watched and remembered the festival with deep fondness and love for the sea of Black and brown people that attended. Watching his first crush Marylin McCoo from the Black pop group, The Fifth Dimension, perform one of their most significant hits, Medley: Aquarius/Let the sunshine in, the festival had a long-lasting effect on the consciousness of the people.

The gut soul-wrenching performance by Mahalia Jackson and Mavis Staples of the Staple Singers singing Dr. King’s favorite gospel song, “Take My Hand, Precious Lord,” is jaw jumping. Sly and The Family Stone brought a revolutionary sound and radical presentation as a multi-racial band that blended various musical and fashion styles. Their popularity made its frontman and lead singer-songwriter, Sly Stone, a funk and rock god among a new generation of music fans. The musical evolution of Stevie Wonder began at the festival as he began to break new ground with new sound and style.

The documentary allows a new generation of music fans to witness and discover the rich tradition of music and politics from a Black aesthetic and lived experience of the Black working class and poor. As we commemorate Black August, Summer of Soul should be required viewing for all to fully grasp the political power and musical history made over six Sundays in the mecca of Black America, Harlem, USA.