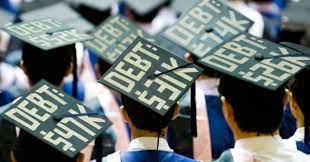 Early last year, as the pandemic first swept the country and tens of millions lost their jobs, the federal government ordered an emergency pause on the collection of student debt payments. That temporary pause is set to expire this September and 43 million Americans will have to pay an average of $400 monthly to service their loans. To make matters worse, the already-lax moratorium on rental evictions is set to expire around the same time, leaving debtors in a position where they must choose between repaying their loans or paying their rent. The price of defaulting on loans is high, as permanently damaged credit scores make it extremely difficult to afford homes or cars.

While the pandemic makes the student debt crisis more visible and acute, it was a nightmare for millions of workers well before 2020. Student debt in the U.S. has been at crisis levels for years as young people take on huge amounts of debt to be able to afford the extreme cost of higher education. Now more than ever, we need a bold political program to cancel existing student debt and ensure that no more students have to take out exorbitant loans just to gain an education.

The Root of the Crisis: Capitalist Profiteering

Higher education in the United States is underfunded and overpriced. The funding available for public universities from state and federal governments is paltry and has declined for years. At the same time, the total cost of a four-year education has skyrocketed dramatically. The declining funding for public universities is the most important cause driving tuition prices higher. Universities must cover more costs with tuition alone, which drives them to admit larger and larger student bodies. Many universities put large amounts of resources into attracting wealthier students that can afford higher tuition prices and may donate large sums to the school years down the road.

While the government continues to defund higher education, a huge industry of bankers are making a killing off student debt. Companies like Sallie Mae convince young students to take on lifetimes of debt that they may never be able to pay back while the creditors profit from interest payments. Especially worrying is the practice of bundling the student debt of thousands of borrowers into a financial product that can be bought and sold as an investment. These Student Loan Asset Backed Securities have incredibly troubling similarities with the speculation in mortgage backed securities that ignited the financial crisis of 2007. From the leadership of universities to speculators in student debt, the ruling class has a vested interest in maintaining the high price of education.

While the largest source of tuition hikes is declining funding and growing student bodies, the leadership of underfunded universities is not innocent. Members of the boards which direct schools are largely unelected, even in the case of public universities, and frequently have more experience in corporations than in education. Exorbitant spending on athletics and construction of flashy new facilities are part of a strategy to attract larger and wealthier student bodies. At the same time, universities are exploiting their workforce more and more as they replace permanent instructors with underpaid adjuncts and graduate students. Academic programs that don’t bring in as much money face defunding. The main way that the undemocratic leadership of public universities responds to funding cuts is to turn universities into profit-generating machines.

Never has the absurdity of the price of education been more clear than in this last year, as students continued to bury themselves in debt to afford a sub-par remote education. For years, job prospects for recent graduates have been paltry, and this is only accelerating. At the same time, the prices of housing, healthcare, and other essentials continue to rise. Recent graduates face serious setbacks in their lives as the debt and affordability crises force them to move back home, remain in miserable jobs, and rethink their prospects of ever owning a home or raising a family. Many graduates will continue to pay back student loans for the rest of their lives, never able to escape the gravity of the interest accruing on their debt.

Biden Won’t Cancel the Debt: We Need a Movement

As a candidate, Biden promised to cancel “up to $10,000” in federal student debt per person, a tiny number relative to the scale of the crisis. Despite campaigning on this promise, Biden has only cancelled debt for students who were defrauded by their schools or who have disabilities. While the White House proudly boasts this positive, but completely insufficient measure, Biden has neither cancelled any student debt by executive action nor included cancellation in any proposed budget.

There are calls from some Congressional Democrats like Senators Chuck Schumer and Elizabeth Warren to cancel as much as $50,000 in debt per person, but none are mobilizing around it or building the kind of pressure necessary to win bold legislation. Real victories for working people can be won on the basis of organized mass movements, even when the right is in power as during the Presidency of Richard Nixon when a number of key gains were won through mass struggle. Large-scale movements of students and workers can win debt relief, but they can also achieve many more policies that would make education genuinely accessible and democratic. Even the boldest versions of debt relief are temporary fixes to the problems of higher education. We should build a movement for full debt cancellation, free four-year public college for all, and hugely increased funding for state universities. Progressives in office who have campaigned on this agenda, like Bernie and AOC, can use their positions to build movements by raising the call for nationwide demonstrations.

In organizing to win demands like debt cancellation and free public college, we need to understand that the same capitalist politicians and university administrations that got us in this crisis in the first place will be obstacles to our movement. Winning what we truly need will require also pushing for democratic control of public higher education by students, workers, and the community. These demands can only be won through a mass movement of students and workers that use tactics like national days of actions, marches on Washington D.C., and debt/tuition strikes (where large groups collectively withhold debt or tuition payments).

More and more young people are seeing how broken the capitalist system is at the same time that they discover the power of mass movements to genuinely transform society and take power from the hands of the ruling class. Winning extensive demands requires not just building large movements, but also uniting those movements on the basis of an overarching socialist program.