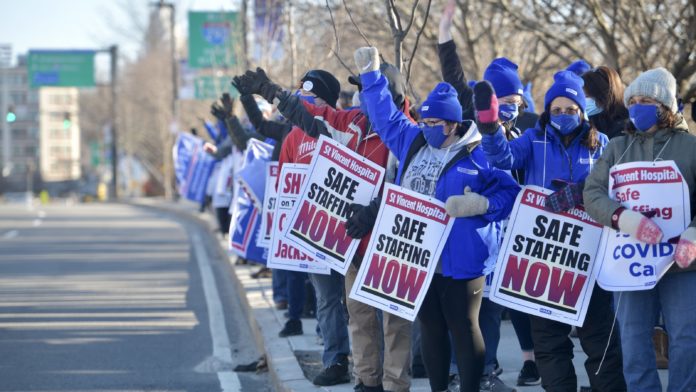 Alishia and Michael are members of Socialist Alternative Worcester Branch.

Imagine yourself or a loved one going to the hospital for important medical care. Maybe it is to get an x-ray, maybe it is for a biopsy, maybe it is for removal of a cancerous tumor, or maybe it is to give birth to a child. But instead of the quality healthcare you expected, the hospital staffing level is as scant as the midnight shift at the local fast food joint. The few nurses you see seem rushed and overburdened. When you push the button for pain relief, no one comes for a long time. There just aren’t enough nurses.

This is the experience of a patient’s recent visit to Saint Vincent’s Hospital in Worcester, MA as told to a Worcester Socialist Alternative member. Nurses with the Massachusetts Nurses Association (MNA) at the hospital went on strike in early March to demand safe staffing. As of this writing, they have been on strike for 12 weeks.

Pandemic and the Fight Against Corporate Greed

Driven by the logic of the U.S. private healthcare system, profit-hungry hospital executives have endangered patients and healthcare workers alike. 2020 exposed the backwards priorities of for-profit hospitals who received millions in government aid, yet didn’t allocate enough of it to PPE, adequate staffing limits, or staff raises. While the vaccine rollout has eased the strain on hospitals, nurses have not forgotten this mistreatment. They’ve been at the forefront of the struggle against for-profit healthcare across the state, and across the nation.

In Worcester, Massachusetts, the nurses at Saint Vincent’s Hospital have been fighting against the ills of privatized healthcare for several years. This includes a successful 49-day strike against Tenet, their parent corporation, in 2000, and a 2018 statewide safe staffing ballot referendum which was devastatingly defeated by a big business-backed “no” campaign. The next iteration of their struggle began in March 2021 when Tenet announced a $414 million profit in 2020. In this context, the nurses officially began their strike for safe patient limits.

Safe Staffing and Why It Matters

For-profit hospitals are always looking to cut costs. One place they’ve found success in doing this has been in stretching their patient-to-nurse ratio to unimaginable limits, far beyond what is safe. Patients are harmed by high patient-to-nurse ratios which lead to lower quality healthcare and a higher likelihood of medical mistakes. Nurses at Saint Vincent’s are demanding a 4:1 ratio in order to provide quality healthcare and reasonable working conditions.

The battle over safe patient-to-nurse staffing ratio in Massachusetts began in 2018 with the “Yes on 1” ballot initiative which would have maintained a 3:1 patient to nurse ratio statewide. But when the referendum was lost, the lid on Pandora’s Box was opened and hospitals began even further increasing patient-to-nurse staffing levels across the state to 5:1 and even higher..

It would be a blow to the executives at Tenet, as well as healthcare profiteers across the state, if  the nurses and patients at Saint Vincent’s won a  3:1  or a 4:1 patient-to-nurse ratio in their new union contract. This could open the gates for nurses at hospitals across the state to fight for a similar demand.

Over the course of the long strike, the solidarity on Saint Vincent’s picket lines has been tremendous. Over 90% of the nurses have held the line for 12 weeks and the atmosphere has been fighting strong.

Nurses unions from across the country have given financial support to the MNA, and healthcare workers from all over the region have shown up on the picket lines. Some have even organized actions to raise awareness about the conditions of their own hospitals afterwards.

The bosses have hired scab nurses from around the country, flown them in and put them in local hotels with private bus service and armed guards to escort them to and from the hospital. They’ve paid them double wages costing Tenet $5 million per week. Tenet created a media campaign to twist the scab narrative. They’ve called this campaign “Support Nurses Against Bullying” which attempts to present the scabs as bullied victims of the picket line. The bosses have vast resources and will bring these resources to bear on the union with a nefarious vigor.

An important challenge now is to build deeper solidarity with striking nurses among other union workers to counter the bosses narrative. This includes the physician’s union and the UFCW Local 1445, which represents cafeteria workers, admins, PCAs, and many others, and is also highly dissatisfied with Tenet and joined the nurses on informational pickets early in the strike. Even though the UFCW accepted an agreement with Tenet, it’s still essential for them to show solidarity to the nurses who are still fighting.    Additionally, Teamsters and the IBEW have shown support on the picket line and opportunities for greater solidarity exist with other unions at the hospital.

Public support for the nurses is almost entirely positive. Honking horns from passing traffic and other union workers like postal workers show the broad support that exists for the nurses. There is a lot of space to build on the current public support by encouraging members of the public to regularly visit the picket lines and encourage friends and families not to cross.

Capitalism and for-profit healthcare is inherently incompatible with high quality healthcare for all people. The strike at Saint Vincent’s is an important battleground in the fight against the backward priorities of healthcare profiteers. Socialist Alternative extends its solidarity with the nurses at Saint Vincent’s in their struggle for a 4:1 patient-to-nurse ratio. Winning this struggle could be a key step in building a struggle of all healthcare workers and patients for an end to healthcare profiteering. We need an immediate transition to Medicare for All as a step toward a fully democratic, publicly owned healthcare system.