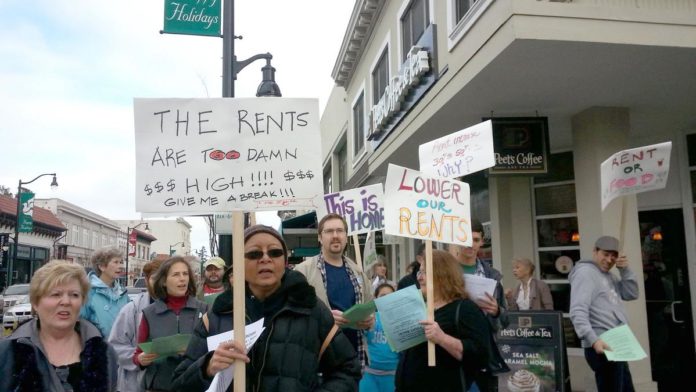 Millions of people in the U.S. are struggling to pay rent. According to a recent survey, one in six adult renters are behind on rent as of March 2021, including 24 percent of Black renters and 21 percent of Latino renters. Twenty-two percent are parents. The economic catastrophe of the COVID-19 pandemic has provoked demands for mortgage and rent relief, and a renewed interest in rent control, a cap on how much rent can be increased in any given year. In Minneapolis, the movement for renters’ rights has been accelerated by the re-emergence of the Black Lives Matter movement in the wake of George Floyd’s murder at the hands of police. In the context of tremendous pressure from working-class communities demanding racial and economic justice, the Democratic Party-led city council in Minneapolis is putting forward proposals to open a path to pass rent control.

Minneapolis Councilmembers Lisa Bender, Cam Gordon, and Jeremiah Ellison are putting forward two paths for rent control, to be decided by voters in the fall 2021 election after a lengthy and treacherous bureaucratic process. The first of these proposals would have city council lead the process of crafting a rent control proposal. The second would allow the movement to collect signatures on a rent control proposal, which would allow Minneapolis residents to play a much more significant role in crafting the amendment and passing it through a vote in the fall of 2022. These proposals to open a path for rent control have passed their first hurdle, sent by the council onto the City Charter Commission (an unelected, bureaucratic body that offers its recommendation to the council on all amendment proposals, but which the city council can ignore if it chooses).

Both proposals received veto proof majorities, which is significant because Mayor Frey has spoken out against rent control, and made clear he wants City Hall to control the process. Councilmember Lisa Goodman did a similar thing, voicing her opposition to rent control in general while supporting a process that allows her to directly shape the rent control policy. While this seemingly creates a path for rent control under the City Council’s direction, in truth Frey and Goodman are covering their hostility under a “Minnesota Nice” response to the Council’s actions. Council President Bender has previously stated her opposition to a rent control measure, and yet voted for the amendment that would allow the council to craft the policy, crediting her change of heart to the so called success of Oregon and California policies, which contain numerous pro-developer carve outs.

Renters know intuitively that rent control isn’t just about preventing singular, massive spikes in rent by a few excessively greedy landlords. It’s also about keeping the already high cost of rent from steadily increasing and snatching away what few gains we might make each year in a struggle to get ahead. This is why there is a growing grassroots movement demanding a strong policy in Minneapolis.

If City Hall is allowed to control this process, renters have no guarantees against the council letting the policy get watered down during backroom negotiations with the city’s corporate landlords and real estate lobby groups. We need only to look at how the council failed to defund the police in any meaningful way after the explosive protests of George Floyd’s murder by former officer Derek Chauvin, to see what their promises are worth. If renters want a rent control that will truly work for us, we must fight for a ballot initiative that will allow us to define strong rent control and build the movement capable of overcoming the weaknesses of the political establishment.

If CM Bender has her way, it’s easy to see just how a proposal based on Oregon’s model would fail renters. While this rent control law is a step forward in popularizing how the fight for housing justice can win real victories, the weaknesses in it offer sober lessons. In Oregon rent is capped at 7% plus inflation (based on the consumer price index) for the year. Even in a year when inflation is low, a renter of a modest one bedroom could still reasonably see a $100/month increase. This same renter’s average increase in wages of around 3% will often be entirely eaten up by this increase. Additionally, Oregon’s policy does not cover buildings 15 years old or newer, or government subsidized rents. Worst of all, Oregon has included what’s called “vacancy decontrol,” where landlords are free to increase rent entirely outside of the rent control guidelines when a tenant moves out. This is the same policy that has decimated the number of rent controlled units in New York City.

When the political establishment makes public statements about progressive or bold policy proposals disconnected from the strategy to win, working people experience how this lip-service is often just the starting point for negotiations, making space for big business or real estate interests to frantically begin their lobbying efforts to protect profits. This was a key obstacle that the movement had to overcome during the fight for a $15 minimum wage. With CM Bender supporting a policy that already assumes concessions before the fight has begun, with lackluster support from the rest of the city council, it shows renters just how difficult the fight for a policy that works for us will be.

Building a Movement is the Only Way to Win

The average renter can easily see the benefit of capping yearly rent increases to their wellbeing. With 43% of Minnesota renters paying over 30% of their income in rent, it’s clear that a strong rent control policy is long overdue. Now, more than ever before it is especially important to build a strong movement of renters who are frustrated with the rising cost of rent, but often feel powerless to bring about change in a system that is rigged against us.

To build this mass movement, Socialist Alternative has banded together with community groups, faith organizations, renter and labor unions and other organizations under the banner of Minneapolis United for Rent Control (MURC) to create a broad, multi-racial, working class coalition of organizers. The coalition is organizing a tabling and door knocking campaign to gather 20,000 signatures and inform renters and community members about the fight for rent control and put pressure on city council. As we have seen through other signature campaigns like the Tax Amazon fight in Seattle, petitions such as this create huge momentum to win demands that might otherwise be ignored by the Democratic establishment.

By standing behind the common goal of enacting strong rent control to protect renter’s interests, our voices are amplified in this fight. The MURC coalition has developed coordinating committees with members from each group, broader general meetings for anyone to get involved, all of which drives the important work of reaching out to renters across the city. Door knocking, text and phone banking, and communicating next steps through social media will all be instrumental to creating the momentum to mobilize during major events and protests.

As we move forward and the momentum grows, we should recognize that City Hall will put pressures on our coalition to work within existing political structures, instead of relying on the movement and building-by-building organizing. In order to build strength against this threat of co-optation, we should consistently stress that this movement’s strength is in its independence from the political establishment. Time after time, the Democratic Party controlled city council has backed down in the face of opposition from corporate landlords, developers and police. To win the trust of renters and working-class communities, the movement must show that we will provide an alternative that represents and fights for our shared interests. This cannot be done by compromising with the establishment.

While we wait for the charter commission’s recommendations regarding the path forward, it will be important to continue to build on the start MURC has made. The movement must call for the ballot initiative, since the city council crafted policy will be disproportionately influenced by corporate landlords and developers. Deal making and back room negotiations that plague the democratic establishment are exactly what City Council have planned for this approach. In order to win a policy that works for renters, the ballot initiative process will be key to giving renters direct input in crafting the policy. A movement championed by MURC puts pressure on the council to vote for the choice that puts people over profits, not the one that continues to prop up landlords.

The Fight for Affordable Housing: Rent Control and Beyond

In order to build this movement, it will be important to mobilize renters across the city. It would be a mistake to over-emphasize the procedural nature of this year’s vote at the expense of informing and fighting for a strong policy with clear demands that renters can see protecting them. This starts with a demand that rent increases be limited to the consumer price index (CPI) of approximately 3% per year. We also require that this policy apply to ALL buildings including new construction, single family and buildings with only a few units, and government subsidized housing. Further, we demand that rent control applies to the unit not the renter, so that landlords cannot simply wait for renters to move out then drastically increase prices. In order to prevent landlords from drastically increasing rent in anticipation of policy adoption, we require a policy that is retroactive at least a year prior to its inception. Lastly, we recognize that any policy is only going to be effective if it is competently enforced. For this reason the policy must contain a provision for a well-funded renter protection board that includes and empowers renters. A recent study commissioned by the Minneapolis City Council showed that MURC’s proposal is not only viable, but it would be a lifeline for thousands of renters in working-class, Black, immigrant, and Native American communities across the city.

Finally, while SA works together with MURC for a strong rent control policy, we also must recognize that rent control is only one tool of many that working class renters need to develop a system both in Minneapolis and nationally that meets their needs for affordable housing. As we are building this movement we must also point to the ways that the City Council has failed to pass stronger evictions protections during this public health crisis. We need to highlight the abysmal attempt that they made to reform how landlords discriminate against Black and brown people via credit and background checks, reforms that are already being challenged in court. We must call for an end to clearing of homeless encampments by police, while at the same time pointing to the need for more publicly available, low cost, affordable housing. As we build a movement for rent control, we must seize the opportunity to build class consciousness around the capitalist nature of the housing crisis, and point that movement towards solutions that truly revolutionize the way we see housing in this country.