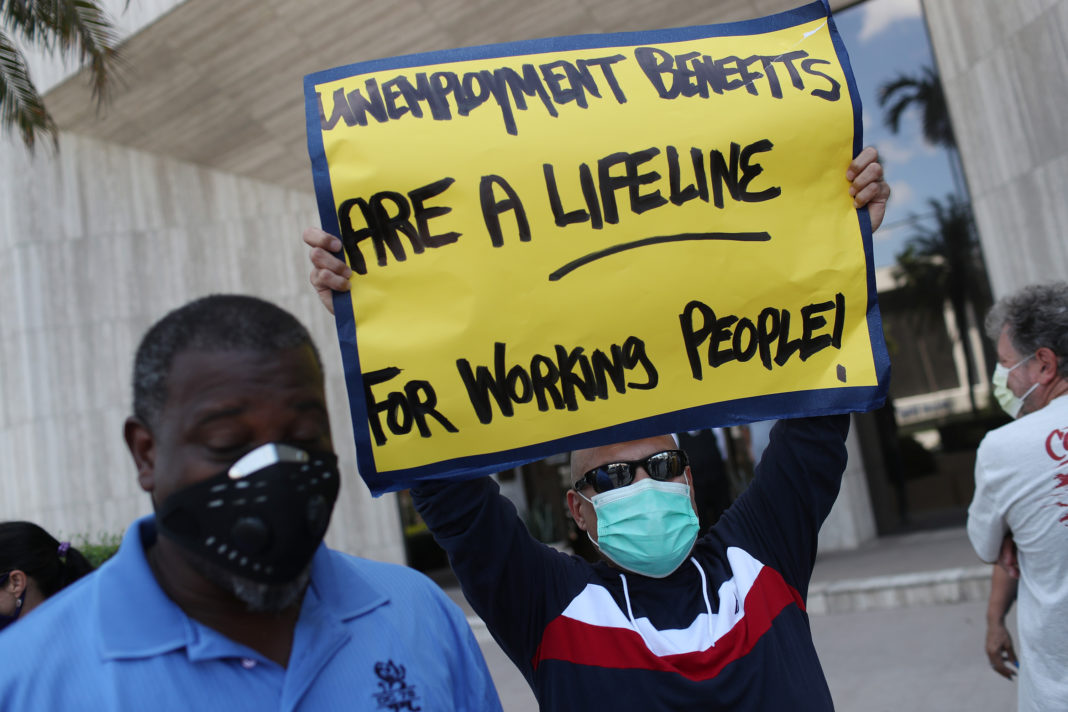 A system as irrational as capitalism keeps even its most ardent supporters guessing. The US economy, expected to get itself back on track as vaccines are rolled out and CDC guidelines relaxed, instead sees help wanted signs remain in windows even as consumer demand grows. After April’s massively disappointing jobs report, right-wing politicians sought to blame the “spoiled” workers receiving unemployment benefits who are allegedly now “too lazy” to work. Of course, chaos like this is nothing new, with repeated economic crises a feature of a system that prioritizes profit over people.

Fourteen months into the COVID-19 pandemic, capitalism is still a long way from stabilizing itself. While billionaires have added trillions to their net worth via an overheated and Fed-protected stock market, it remains a mystery when or if we’ll see pre-pandemic employment levels return. Early numbers suggest May’s jobs report could show similar weaknesses. Capitalists know if they want the good times to keep rolling, they need workers back at work. The ruling class may decry the legacy and teachings of Karl Marx, but they do recognize a fundamental tenet of his work: without workers to exploit, their profits dry up.

On the back of these depressed job numbers, conservatives jumped at the opportunity to name unprecedented government spending as the culprit. From their point of view, people are refraining from work because they earn more collecting checks through federal unemployment top-ups. As of this writing, twenty GOP-led states are cutting the $300 weekly federal unemployment benefits in the coming weeks. The U.S. Chamber of Commerce also hopped on board to pressure lawmakers to end the supplemental benefit, leaving open the possibility that even more states will soon join the exodus.

Across the aisle, Biden and leading Democrats are urging patience, arguing that their American Rescue Plan will “take time” to show its full benefits. Nancy Pelosi, adding credence to the axiom that a broken clock is right twice a day, notes the ongoing childcare crisis, closure of schools, and inability of many parents, especially women, to return to work as driving the unexpected correction in the jobs report.

A sharp antagonism has developed within the American establishment. One section thinks government spending has gone too far and wants to see a quick end to pandemic-era benefits, while another wants to double down on spending measures, particularly childcare benefits, in order to prop up their crisis-ridden system.

The pandemic has laid bare the exploitation required for capitalism to function. During economic upswings, the contradictions of a profit-driven system can be muted. However, during the economic contraction of the past year, workers have seen up close the abominable methods capitalists will use to ensure their bottom lines stay green.

Retail companies cynically use their employees for publicity, calling them heroes and essential workers all the while subjecting them to dangerous working conditions and then fighting them tooth and nail over hazard pay. The U.S. government’s criminal response to the virus put the responsibility on workers to enforce mask mandates, putting them in the line of fire for abuse and harassment from customers. For jobs that already pay so little and offer next to no benefits, it is hardly surprising that these same companies are facing serious labor shortages in the current market.

Broadly, people are reassessing what they want to do for work in light of COVID-19’s dramatic effect on the job market. Some have changed industries entirely, abandoning retail for better paying (but still massively exploitative) warehouse positions. In response to the labor shortage, some employers have had no choice but to increase wages, sometimes significantly, to fill open positions. Amazon, Target, and Costco have all raised starting hourly pay in recent months, with some companies even offering signing bonuses as a way to entice workers into open positions. However, capitalists will always seek to roll back these incentives and will do so the moment they’re able to, meaning that it will take workers getting organized and fighting back to make them permanent.

With the ruling class divided on the steps forward to pull the US economy further out of the hole, Biden’s next two spending plans will be highly contentious and serious pressure will be put on  the Democrats to reduce aid to workers. The U.S. Chamber of Commerce’s statement said the quiet part out loud, noting, “The $300 benefit results in approximately one in four recipients taking home more in unemployment than they earned working.” This, on its own, is entirely horrifying and demonstrates the desperate need to raise the minimum wage to $15 an hour.

Workers have already begun to point the way forward. In fifteen cities across the country, McDonald’s employees walked off the job, demanding a wage increase to at least $15 an hour. “Walkout Wednesday” was pointedly timed the day before the company’s annual shareholders’ meeting, drawing a distinct line between the exploited workers and the leeches who enrich themselves off their labor. In Maine, Dollar General employees left notes in the store window that challenged capitalism and called for strike action as they quit their jobs.

If the unemployment top-up is rolled back, many workers will unfortunately have no choice but to be thrust back into low-paying jobs that don’t provide a living wage. The Squad in Congress, who should be the strongest bulwark against conservatives and corporate Democrats, have thus far refused to challenge Biden, notably remaining silent during the administration’s pathetic abandonment of a $15 an hour minimum wage.

A different strategy is needed where progressives use their elected office, alongside unions and socialists, must galvanize workers into action through protests, rallies, and mass actions like walkouts and strikes. With conservatives vying for spending cuts, it will take the resistance of working people in the streets to defend the meager benefits temporarily extended to them. For example, progressives should rally around the need to permanently extend the child and childcare tax credits so parents are not forced to withdraw from the workforce because they can’t find affordable childcare. The same grassroots strategies can be used to create a movement to win a $15 hour federal minimum wage from the ruling class.

Under capitalism, the ruling minority’s profit seeking drives the allocation of resources. For their system to function, they need workers to fill the jobs and any concern for workers’ needs remains an afterthought, if it’s one at all. The overarching priority of the capitalist elite is to generate profit, which means keeping people at work and maintaining an “optimal unemployment rate” of 4–5%. The economic crisis of the past year, and the general crisis of neoliberalism over the last ten years, is driving the ruling class in varied directions in order to save their system. One section sees the continuing need for state intervention to prop up demand, while another wants austerity to force people back to work and to end pandemic-era relief.

The truth is, no section of the ruling class has the interests of working people in mind, and we can’t afford to put our faith in them no matter how “concerned” they sound. They will give and take away relief whenever it suits them unless we demand more. A system this irrational has outlived its welcome, and it’s only workers themselves who can forge a new path to a more just and equal world. Socialists and progressives must provide leadership by fighting for an extension and expansion of pandemic-era aid, a $15 an hour minimum wage, and Medicare for All. All the while we need to make clear that any gains we win under capitalism are inherently temporary and we must continue to fight for a fundamentally new system.