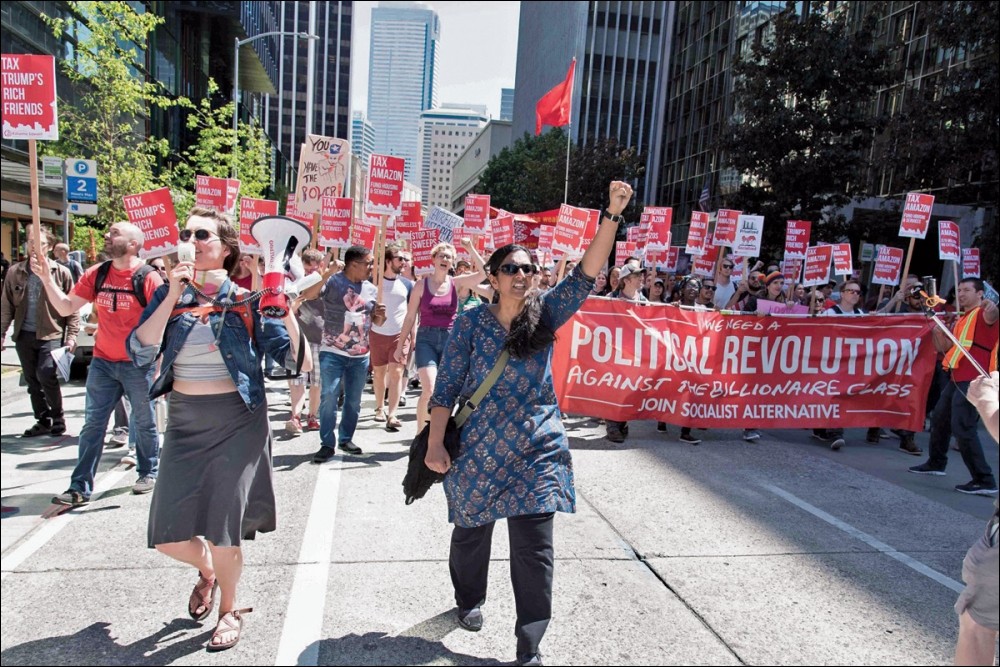 Published on 5/11/2021: Statement from Councilmember Kshama Sawant on why she settled the complaint from the Seattle Ethics and Elections Commission (SEEC) on 5/10/2021 related to her support for Tax Amazon

Washington state, home to some of the world’s wealthiest billionaires, has the shameful distinction of possessing the country’s most regressive tax system, alongside woefully underfunded social services and unaffordable housing. This is nothing new, of course, yet every year it lands like a ton of bricks on those struggling to survive. The human consequences of this deeply unequal status quo have only been further exacerbated by the COVID-19 crisis.

I have fought to change this since I was first elected in 2013, as a socialist who ran a grassroots campaign calling for a $15 minimum wage, rent control, and taxing big business and the rich.

When I first took office, there were those who speculated whether I would actually carry through on my promises for these allegedly “unrealistic” demands. They soon found out that I meant every word.

Our movements in Seattle have set a powerful example for workers everywhere. We have won the first $15 minimum wage in a major city. We have won the historic Amazon Tax. We have won landmark renters rights laws. As I announced last week, our movement is re-launching our fight for rent control in this deeply unaffordable city.

Big business and the political establishment are used to getting their way. When they are unable to chew up newly elected progressives and incorporate them into their corrupt system, they try to spit them out altogether.

But the super rich have not gotten their way these last seven years in Seattle, and they were frustrated once more in the 2019 city elections when they tried and failed to buy City Hall. We have defeated them again and again by building powerful movements.

But every part of the political establishment is now on the same page about their desire to remove my socialist council office and push Seattle politics back to the right. So I was not surprised when, on April 1, the Washington State Supreme Court sided with the right-wing recall attack against me, joining the nationwide attack on the right to protest, with now 81 anti-protest laws being introduced around the country.

In that ruling, the court supported the two charges against me for protesting with Black Lives Matter. They ruled, also outrageously, that the $1,758.87 my Council Office spent to fight for an Amazon Tax last January somehow constituted “malfeasance” or “misfeasance” worthy of my being recalled.

While I was not surprised, it should be said that others with more knowledge of the law and Seattle ethics code than myself were taken aback. In their view, the idea that I had crossed some sort of line in the ethics code was highly questionable at best in the case of a non-existent ballot initiative, but most of all that such a matter certainly did not rise to the level of a recallable offense.

I am no lawyer, and cannot speak definitively about the ethics code. But the Seattle Ethics and Elections Commission (SEEC) has ruled on this matter and I am in no position to dispute their code. I can clearly say, however, as the settlement agreement itself does, that my understanding of the rules regarding ballot initiatives was that I was allowed to use the resources of my office prior to an initiative being filed. Certainly, I did not willfully disregard any ethics rules.

So I have signed the SEEC’s settlement which acknowledges fault in this matter, and will apply this interpretation of the ethics code going forward. Rather than battle further on this question, I would far rather prioritize the fight to win rent control and workers’ rights.

There is one thing I can state unequivocally: I plead guilty to fighting unapologetically to tax Amazon and big business. I plead guilty to spending much of the year 2020, in the midst of a pandemic, fighting alongside hundreds of other activists to make Jeff Bezos fund affordable housing. The Amazon Tax represents, over the next decade, a $2 billion transfer of wealth from Seattle’s richest business to ordinary working people and the poor – a historic victory our movement has every reason to be proud of.

Even if you strongly disagree regarding the specifics of this ethics charge and the $1,700 that was spent by my office for Tax Amazon, you may want to consider whether or not such a matter merits recall. You may consider that given this settlement and fine, under virtually any other circumstances (particularly where the political establishment and big business are not under threat) the matter would be put to rest.

Minor fines against elected officials and candidates by the SEEC for crossing a line in the ethics code are not uncommon and it is very rare for them to result in recall elections, even when they should (perhaps especially when they should). And as SEEC Executive Director Wayne Barnett himself noted at the hearing yesterday on this ethics complaint against me, it is the first complaint against my office to be upheld (and certainly many have been filed as part of the relentless onslaught against my socialist office).

When former Councilmember Sally Bagshaw violated the same provisions of the ethics code in council chambers to hand out literature about a ballot initiative, the political establishment did not cry out for her recall. She paid a fine. Current Councilmember Lisa Herbold also paid a fine when it was ruled she violated Seattle ethics code by sending text messages directly to former Police Chief Carmen Best over an RV parked on her street in October of 2019. When Egan Orion misrepresented himself as having The Stranger endorsement in 2019 by failing to include the legally-required campaign disclosure on a front cover advertisement, very likely knowingly misleading the public to try to win an election, no one in power cried foul. While he paid an SEEC fine, strangely there was no dropping of his endorsement by the Chamber of Commerce, withdrawal of Amazon’s support, or so much as a hint of reprimand from elected officials.

When City Councilmembers, not including myself, were charged with violating the Seattle ethics code in 2018 in the process of repealing the Amazon Tax, again there was no mention of recall. Big business and the political establishment were content to see taxpayers pay the fine on behalf of the City.

When Mayor Durkan spent millions of dollars to teargas and terrorize Seattle residents at Black Lives Matter protests, this was not a recallable offense according to the Washington Supreme Court. Not only did they dismiss the recall against Durkan, they did so unanimously and in far less time than spent to unanimously rule against me. Now we are apparently supposed to collectively suspend disbelief as Durkan says her phone was “lost” and records cannot be retrieved in regards to the brutal crackdown she oversaw last summer.

This last year has made a mockery out of justice under this system. Mayor Durkan faces no consequences for her reckless disregard and relentless attacks on protesters. Nationally, 14,000 Black Lives Matter protesters were arrested while the political establishment continues to be entirely unaccountable for its actions. Over the last decade 28 people have been killed at the hands of Seattle Police, and still not one officer has faced justice.

The only solution is to build yet more powerful movements and a new party for working people and the oppressed.