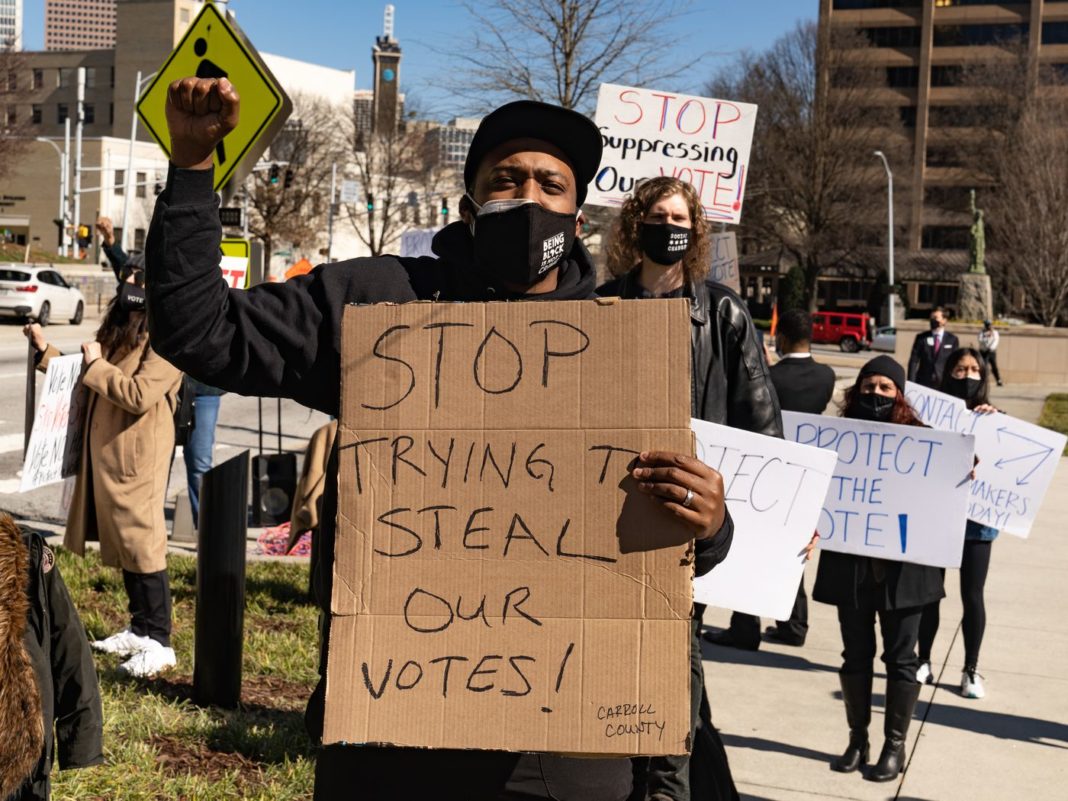 In March, Georgia Republicans signed into law SB202, the most blatant attack on voting rights in decades. On May 6, Florida Governor Ron DeSantis signed into law a sweeping voter restriction law that will significantly restrict mail-in voting. Similar legislation is snaking through state legislatures across the country. These bills are a direct response to the Congressional losses experienced by the Republicans in 2020. Looking ahead to the midterms, they are employing their favorite strategy, rigging the system, in order to regain control.

In the wake of the fraught 2020 elections and the January 6 assault on the Capitol, Biden has taken office and now sits at a 63% approval rating. He has ramped up an impressive vaccination effort and passed the titanic $1.9 trillion relief bill, both of which have directly benefited many Americans. While these efforts are a reflection of the scale of the crisis, and Biden and Democrats will continue to block long-term changes like $15 or Medicare for All, the Republicans could face an uphill battle to regain power.

But a few factors may tilt the balance in their favor, like new census data reflecting population growth in Republican strongholds. Given the clear challenge that the Republicans will face in winning many races if they focus solely on mobilizing their base around a Trumpist message, voter suppression is a core part of their strategy. At the moment, the Trump domination of the GOP has if anything become more consolidated even if Trump’s overall approval ratings have declined significantly while Biden’s have now reached 63%.

The November 2020 elections came on the heels of the largest protest movement in U.S. history, sparked by the murder of George Floyd. This, combined with Trump’s criminal handling of the pandemic, drove record voter turnout as people desperately wanted him out. It was under this backdrop that the Democratic Party was able to posture as the lesser of two evils (and not much else) to win the Presidency, the House, and the Senate. This was especially surprising in Georgia, where Democrats broke a long losing streak. This swing state was not only decisive in winning the Presidency for the Democrats, but also gave the Democrats a majority in the Senate with Kamala Harris as the tie-breaking vote.

SB202 is an exceedingly obvious reaction to these losses. The law cuts the period to request absentee ballots by more than half. Strict voter ID laws will be implemented, which have been shown to specifically reduce voting among people of color in other states. It cuts ballot drop-box locations from 94 to just 23 and restricts access to these boxes to business hours, a clear attempt to suppress the vote of working class people. Misdemeanor charges can now be brought against people handing out water in voting lines, where people can be outside and on their feet for more than 10 hours at a time. Criminalizing the distribution of water is a tactic used at the southern border, and is now apparently a suppression tactic used in our electoral system as well. Another portion of the bill makes it more difficult to vote at a different precinct, a measure that is sure to be problematic for those that have been evicted or displaced during the pandemic.

The 2020 elections reinforced the divisions within the Republican Party, but at this point the anti-Trump elements are in serious retreat. Many lawmakers publicly sided with Trump’s baseless voter fraud claims, otherwise potentially alienating themselves from his voter base of 74 million (Trump won the second most votes of any U.S. presidential candidate). For example Mitt Romney was booed at the Utah GOP Convention on May 1 for twice voting to impeach Trump and openly criticizing him. DeSantis’ explicit attack on mail-in voting in Florida can be clearly understood as a continuation of Trump’s fear mongering about voter fraud through mail-in votes, and reflects the control of the Republican Party by the “Trumpist” wing.

Voter Suppression as Old as Voting Itself

Voter suppression was baked into the system from the very beginning, with citizenship in the U.S. (and therefore voting rights) initially only being afforded to wealthy, land-owning, white men. While voting rights have been expanded over time, voter suppression has continually been used as a tool to deny political power to Black people, women, and the poor and working class. All federal attempts to address this issue, from the 15th amendment to the Voting Rights Act of 1965, have left plenty of room for states to continue to suppress voter participation, especially of Black voters. More recently, in 2013, the U.S. Supreme Court rolled back oversight by federal authorities for districts that have been historically discriminatory, making it easier for states like Georgia to pass voter ID laws and other voter suppression measures.

The Voting Rights Act, while not adequate to stop racist and discriminatory voter suppression, was an important win that dramatically expanded the chance for democratic participation. This did not come from the benevolent inclinations of the ruling class, but was won by mass, militant organizing efforts during the Civil Rights Movement. In fact, in 1963, just two years before the passage of the Voting Rights Act, the Department of Justice recorded 1412 demonstrations within just a three month period. Just like today, those demonstrators faced down police with clubs and tear gas in their fight back against racial oppression.

This bill is not the first and certainly not the last, but is a part of the larger campaign by the right to try to regain control of Congress, as part of pushing a broader reactionary agenda. The new census data, which saw population growth in many Republican strong-hold states, will aid Republicans with their gerrymandering efforts to reduce districts that Democrats could win. Across the country, 361 bills that restrict voting rights have been put forward in 47 states. Five of those bills have already been signed into law and many more have already passed at least one chamber.

This year has also been record breaking for anti-transgender legislation, with more than 100 bills introduced to restrict the rights of transgender people. Sixty bills have been introduced or passed in state legislatures this year to restrict abortion, mostly in conservative-leaning states like Montana, Kansas, and Wyoming.

Georgia’s neighbor to the south, Florida, has just passed HB1, a vicious anti-protest bill that is a clear reaction to the BLM protests that took place last summer. One of the more disturbing measures in HB1 shields counter protestors from liability for killing peaceful protestors with their vehicle. All of these measures represent real, escalating attacks on poor, working, and oppressed people in society.

Major corporations in Georgia and elsewhere, from Coca-Cola to Delta Airlines, have issued statements condemning Georgia’s voter suppression law, only after activists threatened to boycott the companies for inaction. But we can’t forget that these very corporations donated tens of millions to the very lawmakers who are penning these restrictive laws. These statements have more to do with the ruling class’ determination to restore faith in capitalist democracy and its elections after Trump, COVID, George Floyd, and January 6 and as part of reasserting their interests domestically and internationally, than it does with any genuine interest in defending the right to vote.

While the Democrats have been rhetorically opposed to many of these measures, they have done little to create any actual opposition to their realization. In reality we can place little faith in any section of the establishment to defend our democratic rights. The working class and oppressed must fight to defend these rights for our own reasons and with our own methods because they create the space for us to mobilize for our own interests against all wings of the ruling class.

We also shouldn’t have illusions that defeating voter suppression laws and being left with the choice of voting for a Democrat or a Republican will fundamentally improve the lives of working class and oppressed people. Debates have opened up on the left about the viability of reforming the Democratic Party into a working-class party that would be worth voting for. But even progressive members of the Squad have refused to use their influence on the inside to meaningfully fight back against establishment Democrats like Pelosi and Schumer to win things like a $15 minimum wage and Medicare for All. This is why we urgently need to build a new, working class party that energetically takes up these demands, and gives working class people something to vote for, and not just something to vote against. This party could mobilize its base to defeat reactionary voter suppression laws, and so much more.