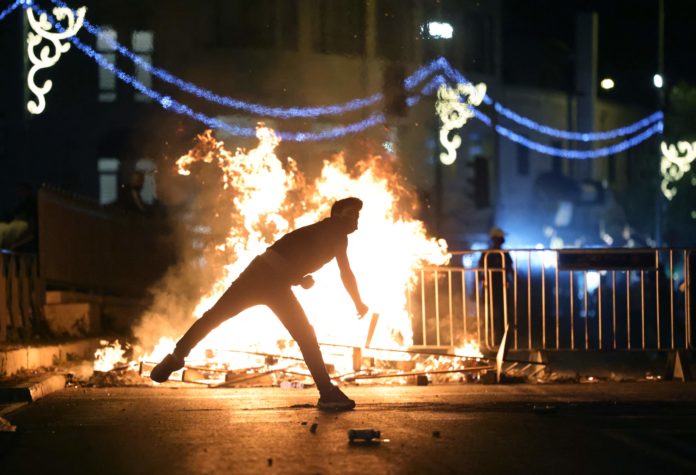 Police broke into al-Aqsa after the Ramadan prayer on Friday night. They fired stun grenades and rubber-coated metal bullets on hundreds of Palestinians. Simultaneously, the protests in Sheikh Jarrah, an East Jerusalem neighborhood, and the Damascus Gate, continued into the night, facing extreme state repression.

The police tried to prevent thousands of Muslims from participating in the in the Lailat al-Qadr prayers – one of the final nights of Ramadan, which annually rings 200,000 worshippers to al-Aqsa. Earlier this week, the IDF shot a 16-year-old Palestinian during a protest. On the same day, a 19-year-old Israeli man who was shot by a Palestinian died. An hour before the riots in al-Aqsa broke out, a stun grenade fired by an Israeli soldier exploded nearby a little girl. This is only one of a series of nationalist provocations from the Israeli state.

In contrast with previous years, the police and the army arrogantly tried to prevent Palestinian youths from crowding at the Damascus Gate area. Fences, barricades, arrests, water cannons, mounted police and stun grenades forcibly stopped them from entering the area, but determined protests compelled the police to allow them in. This is a symbol of increased repression in East Jerusalem, on the backdrop of a particularly difficult Ramadan under COVID which caused a health crisis as well as exacerbated poverty and unemployment in the Occupied Territories and East Jerusalem in particular.

After the protests pulled down the barricades at the Damascus Gate, the Sheikh Jarrah neighborhood became the focal point of resistance in East Jerusalem. Prominent Palestinian activist Muhammad Abu Hummus explained during a demonstration in the area that ‘the victory (at Damascus Gate) gave the youth power, they saw they can get results, and now they’ll go anywhere the occupation exists – like here.’

The Sheikh Jarrah protests changed gears with a struggle against the evictions of poor Palestinian families and the takeover of the neighborhood by Jewish settlers. Palestinians from all around the country came to protest, as well as hold Iftar feasts with the residents. In response, the police increased the repression. The feasts were broken up forcefully, and the protests were faced with violence, almost always ending with injuries.

Reminiscent of George Floyd, on Tuesday, one arrest was documented with a police officer pressing his leg into a protestor’s neck while he was screaming he can’t breathe. Police violence was joined with far-right provocation, with the mayor of Jerusalem wishing Abu Hummus to get a bullet through his head.

Itamar Ben Gvir, a newly-elected far-right Israeli member of parliament, set up a tent in Sheikh Jarrah, across the street from the homes of the families under threat of eviction, claiming this is his new ‘parliamentary office’. His supporters attacked Palestinians during their Iftar meals, one of the settlers’ cars was set on fire, which was retaliated by the settlers shooting at Palestinians. Ben Gvir, of course, was not violently arrested – or at all – unlike members of parliament who came to the neighborhood in solidarity with the families.

On Monday, the state of Israel will mark the anniversary of the occupation of East Jerusalem. The far-right is organizing a provocative march that will pass through the Muslim Quarter in the Old City – the annual Flag March, which is always accompanied by the chant ‘death to the Arabs’ and violent assault attempts. Counter-protests are being organized. At the same time, the Israeli Supreme Court was due to discuss the appeal from the Sheikh Jarrah families regarding the decision to evict them. This discussion has been postponed at the request of the Attorney General.

Without a mass movement on the ground against repression and the occupation in the West Bank, the Palestinian right-wing, namely Hamas and other organizations, might be strengthened. The Israeli interim government will use the police and army to protect the status quo. However, despite the propaganda, there is no military move that can truly bring about peace and security for ordinary Palestinians and Israelis. The only way to stop the escalation is not to bring it back to ‘normalcy’ – but to fight against the status quo, the occupation regime, oppression and expulsions, as part of a struggle for socialist change, for Palestinians and Israelis alike.