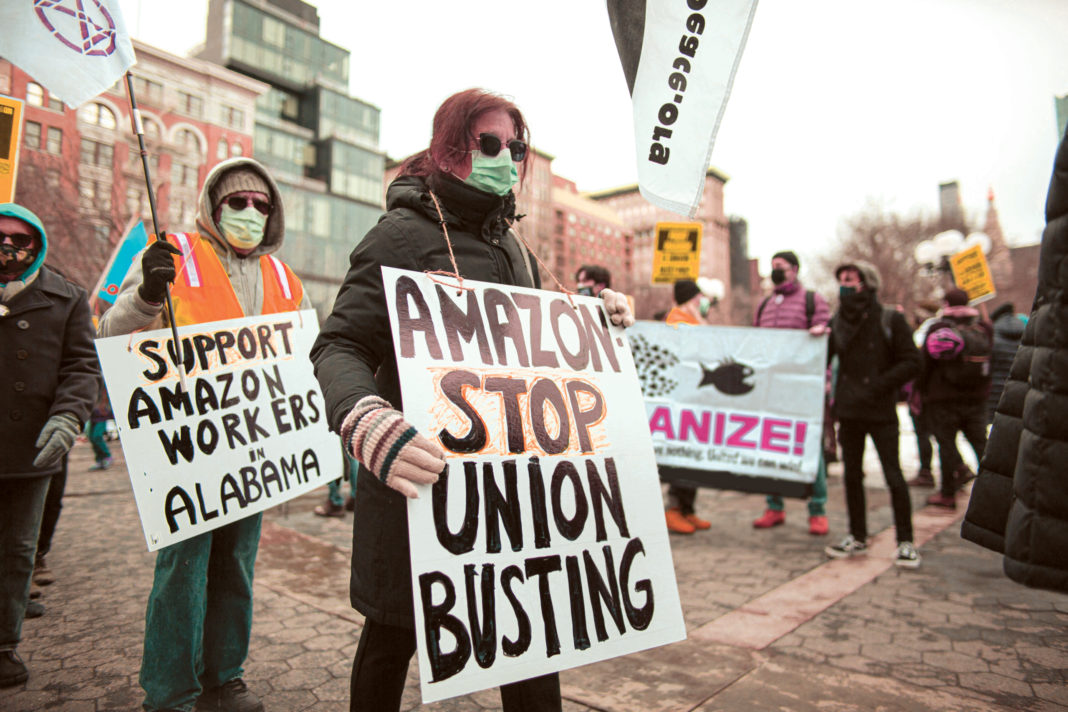 On May 1, millions of workers around the world will celebrate International Workers’ Day, and the huge economic and social gains won by the labor movement. As the U.S. cautiously re-emerges from the pandemic, workers will be confronted with the ongoing disaster of capitalism: the pandemic’s huge death toll, the nonstop battle for racial justice, and the dramatic escalation of inequality.

And while the union vote failed at the Amazon warehouse in Bessemer, AL, all the oppressive working conditions that triggered that union drive continue. Today, dissatisfaction with the workplace is a key driver in 65% of Americans now supporting unions — the highest percentage of support in decades.

In this context, President Biden urged Amazon against interfering in the union election in Bessemer, and has encouraged the Senate to pass the Protecting the Right to Organize (PRO) Act, arguing that “nearly 60 million people would join a union if they had a chance.” The PRO Act — the most progressive union legislation in 75 years — passed in the House and now goes to the Senate. However, Chuck Schumer poured some cold water on this by telling the AFL-CIO that the PRO Act could go to a floor vote in the Senate, but only when 50 senators sign on as cosponsors.

Richard Trumka, president of the AFL-CIO union federation, calls the PRO Act a “game changer.”  It would undo decades of anti-union regulations. Solidarity strikes to support other workers would become legal. Employer coercion against workers organizing unions would be dramatically curbed. Workers covered by union contracts could no longer opt out of paying union dues. Gig workers could unionize.

The PRO Act has drawn a clear line in the sand, with employer federations on one side and unions on the other. Credit is due to the Democratic Socialists of America in particular for making the PRO Act a priority and mobilizing an impressive phone-banking initiative targeting voters and urging them to call their senators. Now, 47 senators and the vice president have expressed support for the PRO Act going to a vote.

However, it remains almost guaranteed that, once on the Senate floor, the bill’s opponents will use the reactionary filibuster rule to force a two-thirds vote. On top of this, even some of the bill’s “cosponsors,” like Joe Manchin, cannot be trusted. He will, without question, act as a block on the PRO Act’s ultimate passage and we should give him absolutely no cover to claim he “supports” it. The Democratic Party is a party of big business, funded by corporate interests that are diametrically opposed to strong unions. They have a long history of offering promises to labor but burying them when elected. Passing any significant, pro-working-class legislation through the Senate will require holding their feet to the fire.

Mass Movements and the 1930s

Winning the PRO Act will require forcing the hands of dozens of senators. This will not be achieved by taking them to dinner but rather by building immense public pressure. In the 1930s, the Senate — even while dominated by right-wing, racist, Southern Democrats — passed federal laws for social security, unemployment benefits, workers’ compensation, and the National Labor Relations Act. The lessons of these victories can be instructive in our fight to win the PRO Act today.

At the start of the 1930s, the old union leaders had not put up a fight against wage cuts, opposed organizing unskilled workers, and did nothing to change rules that blocked Black workers from joining certain unions. They opposed building a Labor Party, leading them into the mire of lobbying. But it was the huge labor uprising of 1934 that shifted everything, including the approach of the president and senators.

The militant 1934 general strikes of workers in Toledo, San Francisco, and Minneapolis, led by socialists, got politicians’ full attention. Workplace-based organizations have the added advantage of structure and sustainability that most street movements lack. Following the rapid flow of millions into the unions, the Democrats and Republicans were panicked into passing wide reforms. The fear of rising anger today is also the context for Biden and the Democratic Party establishment’s sudden awakening around the PRO Act.

The PRO Act, like any legislation, is not a silver bullet. Its aim is to undo the anti-union Taft–Hartley Act of 1947, which, while a major blow to the labor movement, did not by itself decisively reduce strike action and union membership. Labor’s decline played out over a much longer period. A decisive turning point came in the ‘80s, especially with Reagan’s smashing of the air traffic controllers’ union (PATCO). At that time, the bosses waged a head-on war against unions — aided by Democrats and Republicans alike — using wage cuts and workplace lockouts. Union members fought this process through mass demonstrations and long, drawn-out strikes. However, the union leaders failed to match this courage, instead agreeing to concession after concession. They drew the wrong conclusions: accepting neoliberal arguments that there was no alternative to capitalism, cooperating with employers, and moving against the power of members by dismantling shop-steward infrastructures and limiting union democracy.

In the last 30 years, the percentage of workers in unions has halved and the wealth of the 1% has doubled. Escalating inequality has definitely raised support for unions, but the hurdle to joining one is not simply employer terror. The top-down methods adopted by union leaders are not an inspiring model for workers who want to shape their workplaces. Additionally, the wider effect of being unorganized for decades on worker consciousness will take time to overcome but can change rapidly in the wake of a victory.

Building a Union Movement for Our Time

If passed, the PRO Act could be an incredible lever for union resurgence. Unions are popular because they spell higher pay and more job security while weakening bosses’ power to discriminate and terrorize workers. No one is going to start a union drive and put their job on the line unless it’s a battle worth fighting for. And here lies the key to passage of the PRO Act.

The passage of the PRO Act in full will only be possible through a massive mobilization of working people.

Unions represent 16 million workers in almost all industries. With their wages and benefits, they already have something worth fighting to defend. A campaign for these workers to reach out to the hundred million workers who still need a union to talk up both unionization and the PRO Act could pave the way for a surge in union drives. The Democratic establishment will hide behind procedural nonsense to justify inaction on the PRO Act. Whether it’s the senate parliamentarian or the filibuster, we need to be armed with a strategy that can overcome these obstacles.

The AFL-CIO, together with DSA, the BLM movement, and community organizations, must begin to organize mass, masked rallies in every city and town. A joint civil rights and union movement, with a program of demands that will fundamentally change people’s lives, could be unstoppable. Such a movement’s natural course would also be toward organizing an independent political party for working people.

The DSA has launched a phone-banking campaign where they are urging individuals to call their senators and demand they cosponsor the PRO Act. This is a limited strategy in that it does not guarantee that those senators will vote for the bill, nor does it demand support from enough senators to guarantee its passage. In addition to phone banking, we need a bold class-struggle strategy to win the PRO Act, including unions mobilizing their members into action to fill the streets, occupying legislators’ offices, and signing people up to join forces with the labor movement, which could then begin to undo years of defeats. The teacher strikes and the key role in the pandemic of nurses and grocery workers are clear signs of the potential power we have as workers. A mass mobilization of the labor movement would align with the deep, growing anger at inequality and injustice in this country. This could become our 1934 moment.