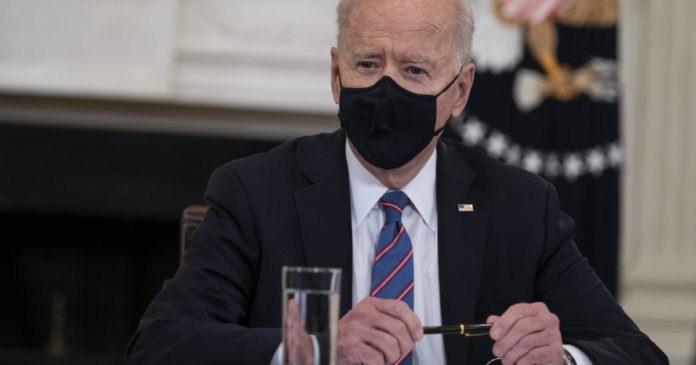 The outlook for average Americans was indescribably bleak in December and January, with several thousand dying on a daily basis as COVID-19 cases surged and lockdowns shut down the economy. With vaccination programs now ramping up to well over two million shots per day, people are looking forward to the return of normalcy. This feeling is buoyed by Joe Biden’s new stimulus package, which is the biggest direct aid measure since the New Deal. This is, however, a very fragile situation, and widespread recovery is contingent on the containment of dangerous new COVID-19 variants.

The passage of Biden’s $1.9 trillion stimulus package reflects a political terrain that has been massively changed by the economic and health crises. While delivering no long-term gains for working people, the short-term spending contained in this package is massive — especially considering its context.

Once upon a time, Biden was the vice president pushing for neoliberal cuts to social security. But because of the massive scale of the crisis facing U.S. capitalism, the thinking in Washington D.C. has taken a new turn. The Obama-era approach to the 2008 recession of bailing out the banks, the stock markets, and corporations, while giving ordinary working people as little direct relief as possible, is out of favor.

Besides the $1,400 checks to individuals, the passage of the stimulus package means parents of minor children will be receiving monthly payments for each child starting in July. Unemployed workers will continue to get $300-a-week top-ups through September, and the moratorium on evictions has also been extended. There is money, though far from enough, to address the massive problems of rent and utility debt.

Overall, the package is so big that economists now forecast U.S. economic growth to exceed the level where it would have been had there been no pandemic. The profound scale of the economic and social crisis in the U.S., and the need for U.S. capitalism to stay ahead of China’s developing economic might, pushed not just the Biden administration, but major institutions of the capitalist class like the Chamber of Commerce and the International Monetary Fund, to support a shift to state intervention in the economy.

After decades of austerity for public services, Biden’s stimulus plan is sending billions to state and local governments, and especially schools. K–12 schools will be showered with $129 billion, which is 18% of total annual government spending on schools in a typical year. Public higher education systems will also get stimulus money. Budget cuts, fee hikes, and cuts to employee wages and benefits should be immediately suspended with the influx of stimulus money, and educators laid off during the pandemic should be immediately rehired. It will be up to workers and the consumers of public services to make sure this happens.

For the millions of households where the pandemic-triggered recession has meant even greater economic precarity, with accumulated rent and utilities debt, the Biden stimulus will provide a little help, but no long-term solutions. All the same, there are a number of factors that point toward Biden being much more popular, temporarily, than one might have expected given his lackluster campaign, in which he ran on little besides not being Donald Trump. Biden’s stimulus money, a reopening economy, ramped-up vaccinations, and the pent-up demand after a year of isolation are resulting in a significant economic rebound.

There is one massive asterisk attached to this package, however: everything in it is temporary. Especially for younger Americans who do not have children, the two major gains from the bill — the $1,400 check and the threat of eviction and student loan payments being staved off for a few extra months — are fundamentally short-lived. The ruling class itself is not so concerned with inflation at the moment partially because they understand that this relief sits on top of a far deeper crisis.

While it is still most likely that there is a significant, although temporary, economic rebound triggered by the stimulus spending and increasing vaccinations — opening up larger parts of the economy — this is not guaranteed.

Unfortunately, a new wave of COVID-19 infections is gathering speed. As of this writing, national statistics show that cases are again rising. In fact, the death rate nationally never fell to a truly low level; 1,000 people are still dying every day. With the highly contagious British variant of the virus now said to represent at least 30% of COVID-19 cases in the U.S., it appears that the pace of vaccinations will not be enough to outrun a surge in virus transmission. If hospitals start to become overrun with COVID-19 patients, there is a possibility that new restrictions could cut across an economic recovery.

Because over two-thirds of U.S. seniors have now received at least one dose of the vaccine, a new wave may be less deadly. However, any increase in cases will mean more people will die, and new variants of the virus that are more contagious and potentially more deadly present even greater dangers. The catastrophic approach of many governments around the world, with the U.S. being one of the worst, in failing to take the measures needed to get the virus under control, plus capitalism’s refusal or inability to develop a global plan to vaccinate people in poor countries, means that variants will continue to rise. We are reduced to hoping that any new variants that develop are not vaccine-resistant.

Where is the Left?

The one measure that was originally proposed as part of the Biden stimulus that would have represented lasting forward progress for working-class people didn’t make it through to the end: the $15 minimum wage. Biden wrung his hands about the senate parliamentarian (an unelected bureaucrat with no constitutional authority that Biden and Kamala Harris could have easily overruled), signaling that he wasn’t prepared to put any real effort into passing $15. Conservative Democrats like Joe Manchin, and especially Kyrsten Sinema, gleefully killed $15, showing off their allegiance to the capitalist class. Bernie Sanders at least exposed the Democrats who opposed $15, but neither he nor “The Squad” did anything to actually mobilize working-class people who overwhelmingly support $15.

Alexandria Ocasio Cortez in particular bears some scrutiny for her inaction on a fighting strategy to win $15. When progressives mobilized around Force the Vote, pressing AOC and “The Squad” to use their leverage in Congress to get a floor vote on Medicare For All by threatening to not vote for Nancy Pelosi as House Speaker, AOC responded that $15 would be a better issue to fight on. Unfortunately for the estimated 28% of the workforce still making less than $15/hour, House progressives failed to mount any real challenge to Senate Democrats taking $15 out of the bill. AOC has yet to explain why she refused to fight for $15.

The Democrats’ extremely narrow majority in the House means that progressive Democrats could organize their forces and threaten to hold up legislation unless it contains their priorities, just as Manchin was willing to do to throw away $15 in the Senate. $15 is so popular, with 59% of Americans supporting it, that this would have been an easy red line for progressives to draw. Had left lawmakers like AOC and Bernie Sanders refused to vote for any bill that did not include $15, and connected with unions and other progressive organizations to mobilize working people with rallies and town halls, at worst there would have been a much higher cost to Biden and the establishment for killing $15, and, at best, $15 could have been won.

“The Squad,” and AOC in particular, has played a positive role in popularizing progressive measures like the Green New Deal, and in supporting Bernie Sanders’ presidential candidacy. But with the Democrats in control of the presidency and Congress, AOC seems to be limiting herself to strongly-worded tweets rather than mounting a credible opposition that actually threatens the Democratic establishment. AOC risks losing credibility with a layer of radicalizing working people, and particularly youth, who are impatient for real reforms.

Biden is set to continue his program of state intervention in the economy with a massive infrastructure program and a social services bill. At the tail end of March he released initial plans for his infrastructure bill (see back page). Details on the part two bill have yet to be released, but reports suggest that the two bills together could be worth $3 to $4 trillion, and include traditional infrastructure items like roads and bridges, measures to combat climate change, an extension of the child tax credit, and student debt relief.

Biden has suggested funding for these measures could be raised through tax increases on corporations and the rich. Republicans in Congress, as well as some Democrats, will fiercely oppose many of these measures, and it remains to be seen what will ultimately get through Congress. Like he did with $15, it’s possible Biden dangles progressive taxation in front of our eyes to win support from Bernie and “The Squad,” only to take it away to appease Manchin and the Republicans. It’s crucial that the left gets organized to demand Biden goes much further in taking decisive steps towards a Green New Deal, a $15 minimum wage, and Medicare for All.

Despite its inadequacies, if Biden does manage to pass one or both of these spending packages, it will be seen by many ordinary people as a real success particularly because of the job creation component.

However, the left must hold steadfast in clarifying that far more is actually needed to address the scale of the climate and economic crises we face. Temporarily, the Democrats and their masters in the billionaire class see the necessity to spend big to kickstart the economy while adding to the federal deficit, but that has never been a permanent solution to the crisis-ridden system of capitalism. Even the most robust spending proposals from the Democratic establishment, like the $1.9 trillion stimulus, do not come close to meeting the needs of the vast majority of working people desperate for far-reaching change.

A new crisis of capitalism is brewing, even before we’ve exited the current one, and at some point the billionaire class will attempt to stick workers and youth with the bill for the spending measures that Biden is enacting. While working people might appreciate Biden’s actions to handle the coronavirus after the utter chaos of 2020, ultimately, Biden’s legacy may well be defined by an expression of the massive anger that working people and young people have at the system, lying just beneath the surface.