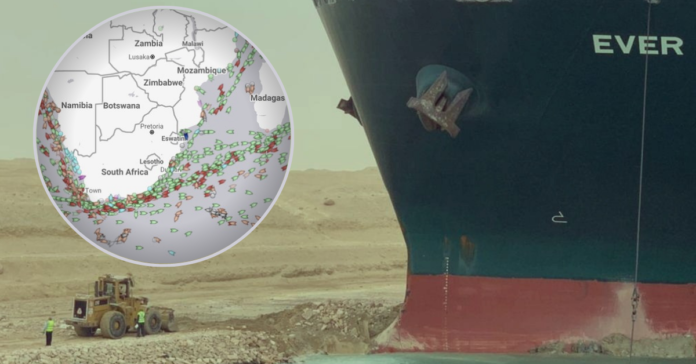 On the morning of March 23rd, a fully loaded golden-class container ship, the “Ever Given” managed to get itself stuck in the Suez Canal, completely blocking the important waterway for a period of almost a week. Strong winds creating severe dust storms and zero visibility caused the bow of the ship to drift into the sandy bank, getting buried deep in the mud. The blockade caused an enormous backup in one of the worlds’ major trade routes – it is estimated that $400 million in goods pass through the canal every hour. Connecting the Red Sea to the Mediterranean, the Suez Canal carries over 13% of all global trade, allowing ships to cut about 10 days and 5,000 Nautical miles off of the longer route from Asia to Europe around the Cape of Good Hope in South Africa.

Early attempts at getting the ship unstuck were proven to be futile, though they did inspire a slew of internet memes. Images of the gigantic ship stranded next to bulldozers that seem tiny in comparison served to amusingly highlight both the absurdity of capitalism’s vulnerabilities with so much of global trade backed up due to a simple blunder, and the pathetic lack of resources reserved for promptly responding to disruptions.

The ship is indeed very big: the Ever Given is as long as the Empire State Building is tall. Measuring 400 meters in length and 60 meters wide, it is, together with others in its class, one of the largest self propelled oceangoing vessels in service. And while the incident in the Suez may seem at first glance just bad luck made worse by bad weather, the reality is that the ship, and others of similar size were only launched a few years back and are really just too big for canals built over 150 years ago.

For years, the limiting factors for ship sizes were the dimensions of the different canals, referred to as “Panamax” for the Panama canal, “Suezmax” for the Suez canal, etc. Some vessels that can opt to never sail through these waterways, like cruise ships, were built bigger, but this wasn’t a viable option for container ships. The growing shipping industry has put more and more pressure on canal authorities, and expansions in recent years have pushed these limits further (“New Panamax” for example was introduced in 2016). However, in light of recent events, it is worth asking if these canals are really prepared to handle such big vessels in case something goes sideways.

Despite the obvious advantages of taking a shortcut in terms of saving energy, time, and cost, the trade passing through the Suez Canal doesn’t necessarily showcase efficiency and optimization. For example, about 600,000 barrels of crude oil flow from the Middle East into Europe and the U.S. via the canal on a daily basis, while 850,000 barrels a day are transported through it from the Atlantic Basin to Asia in the opposite direction. This gross redundancy is barely glossed over in dry statistical reports, and never highlighted by the media. But it is not limited to just oil, nor just to the Suez Canal. Statistics of choke points simply bring to light a much wider phenomenon that is ingrained and many times intentionally designed into today’s global supply chain – redundancy.

Goods are moved around the world not in a way to minimize energy consumption, CO2 emissions, pollution, or supply times, but rather only to maximize profit. International corporations extract raw materials where they are most able to bend or ignore local laws, manufacture where labor can be most exploited, and sell where and when it’s most profitable. Waste, mostly plastic but also toxic and nuclear, is then shipped to be dumped out of sight, instead of properly reused, recycled, or disposed of.

Global shipping is designed through the concept of the “free flow of goods,” but in reality, it functions as a network of redundancies able to bypass any “political choke points” such as labor, safety, or environmental laws. This process of globalization was, and still is, instrumental in eroding workers rights around the world via means of de-industrialization. International shipping corporations are able to bypass or ignore local laws by different means like registering their ships in some unrelated country with extremely lax labor, safety, environmental, or tax laws. The Ever Given too was registered in Panama, despite having no actual link to the country. This practice is called “Flag of Convenience” and is extremely common around the world. In 2019 for example, the US based cruise giant Royal Carribean had a total income of $1.9 billion but paid only $32.6 million in income tax, or a meager 1.7%. Given how common the practice is, it’s hard to think of this problem as a simple case of closing a few tax loopholes, and not as requiring a complete systemic overhaul.

Shipping as a Driver of Global Pollution

The so-called lawlessness of the high seas isn’t just a matter of mass, internationally-orchestrated tax evasion, it also stands at the root of overfishing, ocean pollution, and the destruction of natural habitats. Globally, shipping is responsible for 3% of greenhouse gas emissions, and attempts to address that as part of international agreements such as the Paris Accord are limited to the national and regional level, lack real enforcement mechanisms, and are sometimes even completely ignored by the industry. Improper waste disposal in international waters is also a growing concern, and while household and single use plastic may draw more public attention, it’s actually discarded fishing gear like nets and buoys that make up most of the waste. “The Great Pacific Garbage Patch” for example, was found to consist of 60% discarded fishing equipment.

The Suez Debacle Shows the Need for Large-Scale Global Solutions

But the oceans are not truly lawless – maritime law and the law of the sea exist, bodies like the International Maritime Organization exist. The laws governing our oceans and international shipping however are designed to serve the short-sighted profit driven interests of a few corporations. The Ever Given is owned by a Japanese shipbuilding company, chartered to the Taiwanese shipping company Evergreen, and managed by a German ship-managing company, but is allowed, like so many other vessels, to be registered in Panama so as to avoid regulatory oversight in any of these countries. Even though many countries have ratified multiple conventions, and with today’s technology the world navies are more than equipped with the means to enforce them, national contradictions and opposing interests of capitalists from different countries hamper any serious attempts for global coordination, regulation, or enforcement.

At least 30% of the world’s oceans need to be designated as areas protected from fishing, drilling, dumping, and shipping. Fishing stocks need to be allowed time to bounce back using temporary and local bans, and then managed closely in a sustainable way. Global shipping should be redrawn to remove redundancies and optimize for energy consumption and CO2 emissions. The practice of flags of convenience should be outlawed promptly and enforced harshly. This is the bare minimum required if we want to have any chance of tackling global climate change, habitat destruction, pollution, or growing inequality. These tasks make it clear however, that the problems we’re facing cannot be solved if left in the hands of private corporations, driven solely by short term profit. Winning the scale of the change we need means building a mass movement fighting to do away with capitalism and bringing global shipping and fishing under closely regulated democratic control, internationally.

The blockage in the Suez is over with, but the delays it caused are expected to strain the global supply chain for months, exacerbating the ongoing shortage of containers due to COVID. The cost of the delays, insurance claims, and rescue operations could end up in the billions, and international shipping and distribution corporations will undoubtedly attempt to pass that cost on to consumers and workers by raising prices and demanding concessions from governments. The incident may have provided some comic relief in strenuous times of a global pandemic and economic crisis, but the underlying statistics of global shipping reveal a much grimmer picture of a wasteful and myopic system that must be done away with.

The only solutions to the problems exposed by this event can be found in workers getting organized to take matters into their own hands and force the necessary changes to the way we treat and use our oceans. Winning the scale of the change required means building a mass movement fighting to do away with capitalism and bringing global shipping and fishing under closely regulated democratic control, on an international scale.