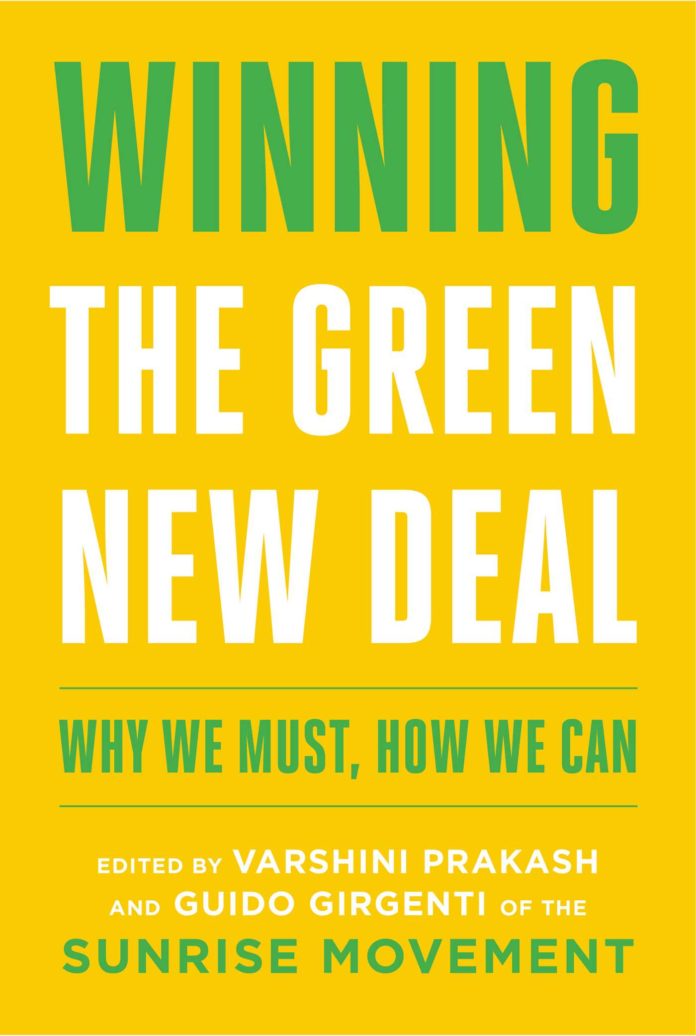 “Young people have got to rise up. That’s it. That’s the message.” These are the opening lines of the Sunrise Movement book Winning the Green New Deal: Why We Must, How We Can. It’s hard to argue with this sentiment and call to action. Under our current system, climate change is an inexorable death march that’s not a matter of if or even when, but how bad?

The Sunrise Movement has become a major factor in the fight for climate justice, growing to over 400 hubs across the United States over the past few years. Sunrise, along with Alexandria Ocasio-Cortez, made headlines with their sit-in at Nancy Pelosi’s office demanding a Green New Deal in 2018. Their membership is made up primarily of youth, who have the most at stake as climate change projects an uncertain and terrifying future. The global climate strike of September 2019 proves that there is a mass base capable of driving meaningful change, with over three million people participating in over 4,000 events in 150 countries.

Sunrise gathered a list of activists and organizers to write a series of chapters on the Green New Deal, the plan and policy they advocate to reduce or possibly reverse the severe environmental damage that has been done to the planet. But while the authors accurately define who is at fault, the book’s strategy for winning the GND does not address how to overcome the current political gridlock. It also does not meet the timeline required to effectively battle the climate crisis.

The book’s early chapters lay out the nature of the crisis and why the Green New Deal is the solution. To effectively battle climate change, we must know who the driving force behind it is, and Kate Aranoff and Naomi Klein’s chapters argue that it’s neoliberalism, the most recent form of capitalism. Neoliberalism is focused on “privatization of the public sphere, deregulation of the corporate sector, and lower corporate taxation, paid for with cuts to public spending” (p. 30).

The ruling class pushes the narrative that all individuals must do their part to combat climate change by recycling, using paper straws and buying electric cars. The reality is, as Aronoff states, “We don’t all have our hands equally on the levers that fuel climate chaos. A tiny set of very powerful corporations and oligarchs spent prodigious amounts of money to keep burning and extracting towards destruction” (p. 16). The data backs it up. Only 100 companies are responsible for over 70% of greenhouse gas emissions since 1988.

Meanwhile, as the planet gets hotter, the working class has faced extreme attacks over the past 30 years as wages flatline, pensions are cut, public services are privatized, and healthcare, education and housing costs soar. This has led to inequality levels not seen in a century as the top 1% captures the majority of the new income generated year after year. It’s clearly not because working class people aren’t willing to make personal sacrifices that we aren’t addressing climate change. As Klein says, “we have not done the things that are necessary to lower emissions because those things fundamentally conflict with deregulated capitalism” (p.30).

Climate Change is the Symptom, Not the Disease

To properly address climate change we need to transform our economy to be less destructive of natural resources and do so in a way that is equitable to the global working class. Millions of good paying union jobs must be created to aid this transition, ensuring economic security for all. The book challenges the false dichotomy, often taken for granted in the environmental movement, between jobs and environment by pointing out that, “the investments required to retrofit the economy by themselves would generate large numbers of jobs” (p. 104). Additionally, the authors of these chapters correctly link environmental activism with the fight for racial justice. Any broad movement that seeks to disrupt the status quo must also reject the racism baked into capitalist institutions.

The book argues that it is in the best long-term interest of society to make the short-term, less profitable sacrifices now by switching to green energy. While this would certainly help, it is unfortunately inconsistent with how capitalism functions. The authors seem to be at least partially aware of this, even quoting economist Mariana Mazzucato’s analysis: “Markets are blind… They may neglect societal or environmental concerns…they often head in suboptimal, path-dependent directions that are self-reinforcing” (p. 78). Capitalists will always seek to maximize growth in the short-term, as evidenced by the fact that they’ve known about the impact of capitalist production methods on the climate for four decades and have done nothing fundamental to end their dependence on fossil fuels while environmental devastation continues. We simply do not have the time to wait for these companies to do the right thing.

If capitalism is the problem, it points to socialism as the solution, which the book does not call for. While there is some discussion on the benefits of taking the energy industry into public ownership, there is no call for workers taking control of the means of production and a democratically planned economy. Rather, there is a call to “rebalance the relationship between the public (the state) and the private (the market)” (p. 79).

This incorrect bifurcation gives the impression of two separate entities, blurring the reality that the state under capitalism represents the interests of the capitalist class. They wield influence through their massive campaign donations to corporate political parties and the revolving door that allows politicians to become corporate lobbyists and millionaires and billionaires to buy their way into office and use it to further their interests. Under capitalism, state intervention into the economy is either the result of mass working class pressure (such as the struggle that won Social Security in the 1930s), or it is done to achieve things for the collective interests of the capitalists that they won’t do themselves (like the interstate highway system). Capitalism has and always will put profit over people until it is overthrown or destroys human life as we know it.

Sunrise’s theory of change is simple: “if we keep building people power and political power, we will win a Green New Deal” (p. 142). They further breakdown people power into 1) a durable majority and 2) an active base, both of which they seek to grow. On the first count, the Green New Deal is broadly popular and stands to become even more so as environmental conditions continue to get worse. But broad support is clearly not enough. To put real pressure on corporate politicians and their backers, the movement must feature mass mobilization including mass civil disobedience and bring the social power of working people to bear with strike action. As the book accurately notes, “The course of history changes when ordinary people bring business-as-usual to a halt” (p. 155). Labor unions must take up the call for a Green New Deal, linking the fight for economic demands with environmental justice.

Sunrise naturally requires that the elected representatives they support do not take any contributions from fossil fuel companies. They endorse “champions”, politicians who support their policy priority areas and seek to change the status quo. The model champion referenced throughout the book is of course Alexandria Ocasio-Cortez who helped write the Green New Deal legislation. Unfortunately, while AOC supports policies that would broadly improve the lives of the working class, she has yet to draw on the “people power” by calling for mass mobilizations to win them. AOC supported the Sunrise Movement’s sit-in in Pelosi’s office, which galvanized youth and workers by showing a different way to stand up to corporate democrats without using backroom politicking. Since then, however,  she and the Squad have quietly refused to use their leverage, for example failing to challenge Pelosi’s bid for Speaker of the House. This is a more serious weakness after the 2020 election now that the Squad holds the balance of power in the House.

AOC is hamstrung by working within the Democratic Party, an institution that is still controlled with an iron fist by its corporate wing. There was some hope last year that the balance of forces within the party had shifted when (another climate champion whom Sunrise endorsed) Bernie Sanders’ presidential campaign was at its height. As we saw in March though, the establishment quickly and effectively circled the wagons to neutralize a progressive takeover and has waged war on all the policies they stand for, including a Green New Deal. To add insult to injury, voters had to watch President and VP-elects Joe Biden and Kamala Harris refuse to commit to banning fracking in the debates leading up to the election.

Despite all available evidence to the contrary, Sunrise continues to advocate pushing the Democratic Party from within, even absurdly declaring that the party is theirs now. While Biden has committed to the idea of large investment in infrastructure (paid for through even more borrowing), this is framed as a part of a transition to carbon neutrality by 2050, a timeline too far away according to Sunrise and most climate science. Youth and workers will never be able to win the meaningful, equitable gains they seek within a party that is structured around the interests of capitalists. Sunrise would do well to listen to a quote from their own book, “We’re speeding toward catastrophe so quickly that winning slowly is the same as losing” (p. 140).

While the book draws heavily on the 1930s and the victories of the New Deal, it should be noted that President Roosevelt was forced into passing progressive legislation to save capitalism from the working masses fed up with the status quo (reform from above to prevent revolution from below). But these reforms were combined with pro-capitalist measures like paying farmers to destroy their own crops to drive up prices. After making concessions under duress, the capitalists have effectively chipped away at all the New Deal legislation over the subsequent decades, especially under neoliberalism, bringing us to our present crisis.

While we support the program of the Green New Deal, we cannot continue to have illusions in fixing capitalism with a “kinder” or “green” capitalism. We do not have the time to fight for temporary improvements only to see them reversed shortly after. In addition to calling for millions of good paying union jobs, we should also demand a tax on the billionaires and big business to fight the climate crisis they created. We should bring private utilities, transportation and major fossil fuel companies as well as key parts of the logistics and manufacturing sectors  into democratic, public ownership and those should immediately be retooled for renewable energy sources.

The authors should also direct the existing people and political power on their side to call for the formation of a new party that actually is accountable to and fights for the interests of working people. The Sunrise Movement, along with figures like AOC and the Squad could mobilize the base of people who supported the Sanders campaign to lay the groundwork for the formation of a mass left party. This way, their local organizing will not wind up co-opted and neutralized by the Democratic Party, the graveyard of social movements.

The Sunrise Movement has assembled an impressive grouping of energetic youth and ideas to help stave off the worst effects of climate change. They clearly understand the power working people have, stating, “Collective action rooted in social movements is the most direct way to bring about change, and it’s how working people will win a Green New Deal” (p 133). Unfortunately their strategy to win involves staying within the lanes of capitalism, a system that created and is unable to deal with this existential crisis. It’s time to use our leverage to build towards the only system that can save the planet while providing a just and equitable living for all: socialism.