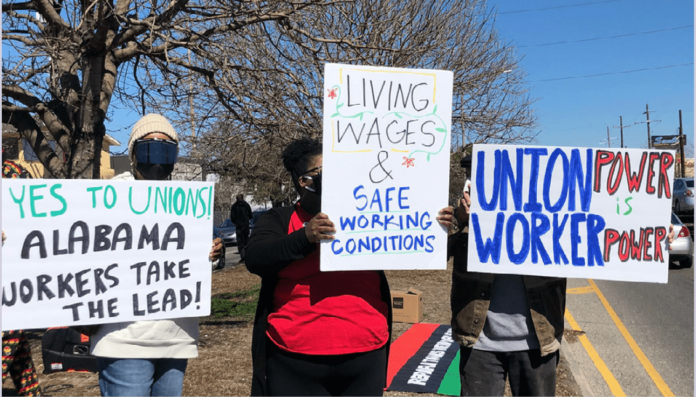 5,800 Amazon warehouse workers in Bessemer, Alabama are making history as they fight for union recognition. If they win, they would form the first union at Amazon in the U.S. A victory there would be a shot in the arm for the rest of the labor movement, and already workers in dozens of other warehouses across the country are hoping to take the fight to their workplace. A victory against the richest man in the world and one of the largest corporations globally would send the message that if we fight we can win. Amazon knows this, and has been berating workers with anti-union messages and threats of a total closure of the warehouse.

One year on from the onset of the pandemic, Amazon has doubled its profits from the previous year and Jeff Bezos has increased his wealth by more than $48 billion. While Bezos rakes in an estimated $40 million an hour, the workers who generate all his wealth are paid just $15 an hour or less, which for many isn’t enough to live on. Workers everywhere are realizing who really runs society: warehouse and logistics workers, healthcare workers, letter carriers, grocery workers, transportation workers, and all those now deemed “essential.” Workers everywhere are tired of the exploitative conditions, exacerbated by COVID, and unlivable wages while the bosses add to their billions.

The fight back in Bessemer is well underway with just two weeks left for workers to mail in their ballots. The majority Black and women workforce has been backed up by Black Lives Matter Birmingham, socialist and left groups, other unions, and the broader community who have been canvassing daily and staffing the warehouse gates to show support. To win, it will take the strongest movement possible to cut through Amazon’s lies and prove what is possible when working and oppressed people stand together.

This Saturday, March 20 is a national day of action in support of BAmazon Union. Workers, the unemployed, young, and oppressed people should attend or organize events in their area to inspire confidence in Amazon workers and spread the movement nationally. Even if they win a union, it will take an all out battle for a good, first contract, and to spread the movement to warehouses and workplaces across the country. To do that we need to start getting organized now to put ourselves in the best position to take on the bosses, and win.