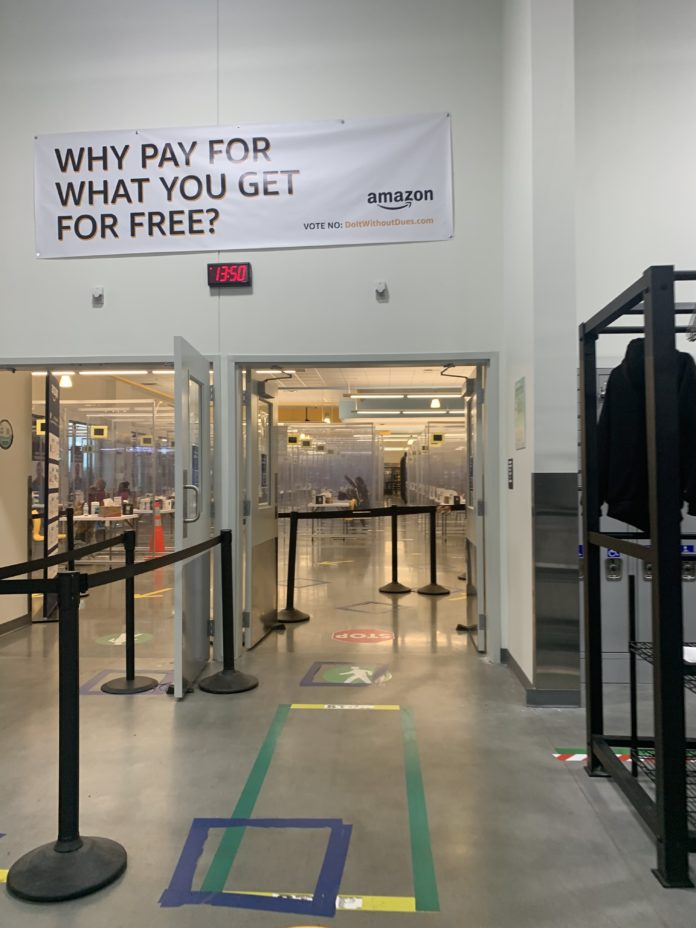 As an elected representative of Seattle’s working people, a rank-and-file union member, and a member of Socialist Alternative, I am inspired by the bravery and tenacity you have shown in your fight to win recognition for the BAmazon Union in Bessemer, Alabama. Socialist Alternative and my Council office stand with you as you encourage your fellow workers to vote a resounding “Yes” for workers’ rights, dignity and respect, and RWDSU!

You have taken on some of the most powerful multimillionaires and billionaires in the world. By standing up, you are fighting on behalf of yourselves at BHM1 and millions of other workers at Amazon and other corporations who are struggling under brutal working conditions. The brunt of the current crisis is being thrust upon the working class, while the bosses and CEOs make record profits off the pandemic. A victory for you in Bessemer could be a historic turning point for working people across America. It would be a shot in the arm for workers fighting against workplace injustice, racism, and sexism.

Amazon alone made a record $21.3 billion in profits last year. As with other large corporations under capitalism, these profits primarily derive from exploiting workers with low wages. Workers at Amazon face chronic short staffing and sweatshop-like conditions, including monitoring workers to the minute, making even bathroom breaks difficult, and forcing work despite COVID symptoms. Over 20,000 Amazon workers are known to have tested positive for COVID, with the Alabama warehouse reporting one of the highest infection rates. Amazon has also notoriously skipped out of its obligation to pay federal taxes, and shamefully even stole over $61 million in tips from its contractor delivery drivers.

Amazon has absolutely no business telling workers not to pay union dues or carry out a completely dishonest, anti-union propaganda campaign. The very fact that they are fighting so hard is itself proof that they are lying. The company is fighting precisely because they know that when you win, they will have to begin to respect your demands. They are afraid of the collective power you’ll have as a union. If workers organized in a union had no power, why would the bosses fight it?

Moreover, they know that many other Amazon workers are watching and supporting your struggle, including tech workers, and your victory will give confidence. The recent victory for the Google Alphabet Workers Union shows how the big tech bosses can be beat, and how the tech, gig, and logistics industries will be a major battleground in workers’ struggles. The Red States Teacher Strikes of 2018-2019, beginning in West Virginia, also showed that the American labor movement is beginning to rediscover its proud, fighting traditions, including in the South.

Some people may say that Amazon is too big, too powerful to beat.

They are wrong – and I have proof.

In January of 2020, our socialist City Council office launched Seattle’s Tax Amazon movement, along with hundreds of working people and union members, to tax Amazon – which is headquartered here – and other major corporations to fund affordable housing, Green New Deal projects, and other urgent human needs.

Amazon had just spent unprecedented corporate cash in 2019 in their attempt to defeat my third election – in which they failed – and our campaign promise to fight for the Amazon Tax. Before that, in 2018, Amazon executives got Seattle’s political establishment to overturn an earlier version of this big business tax, with me being one of only two votes out of nine Councilmembers against this capitulation to Jeff Bezos.

Seattle’s Mayor – a corporate Democrat elected with a record donation from Amazon – told the media last year that our Amazon Tax was “never going to happen, and I think it’s irresponsible for anyone to say that that’s even possible.”

But we organized, collected over 30,000 Tax Amazon ballot initiative signatures in one month’s time during the Black Lives Matter street protests, and last July we won. We beat Amazon and their bought-and-paid-for politicians, and won a tax four times larger than the original tax that was repealed!

Community members at the protests drew the connection between the brutality that Black and Brown people face on the streets, and how major corporations treat us. As part of the Amazon tax, we even won a law that dedicates a portion of the tax to build affordable housing in the historic African American Central District of Seattle – an important win for Seattle’s Black working class.

That recent experience shows us that Amazon can be beaten, whether in Seattle or in Bessemer.

It also shows we must fight not only for basic workplace rights but also for democratic control over our workplaces. As you have correctly said, “Amazon presents a threat to the very fabric of society and the social contract we work to uphold for all working people.” Jeff Bezos didn’t create the internet and Andrew Jassy won’t be sorting or delivering any packages as Amazon’s new CEO. Over a million workers go to work for Amazon globally every single day and generate the profits. We should ask why billionaires should get to decide how to use the product of so many people’s collective work, and enrich themselves so spectacularly while so many struggle even after working so hard. Amazon should belong to, and be democratically controlled by, the workers who make it run. That is why I’ve called for democratic public ownership of Amazon when Bezos threatened to move jobs out of Seattle in their attempt to defeat our Tax Amazon movement.

I have no doubt you can win. Of course, we must be prepared that in the coming days and weeks, Amazon executives will continue to lie and throw every nasty, under-handed, anti-union tactic at you. They will say that organizing a union is futile, that it won’t change things.

Stay united, stay strong, and know that my City Council office, and my organization, Socialist Alternative, will do everything in our power to support you in your historic fight!