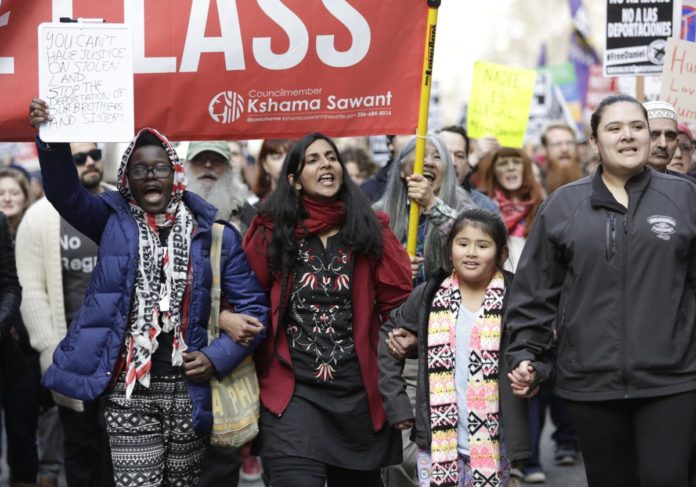 Kshama Sawant was first elected to the Seattle City Council in 2013 with over 90,000 votes, running as a proud Socialist Alternative member back before “Bernie” and “AOC” were household names. She was the first elected socialist in Seattle in nearly a century. Kshama used her 2013 election campaign to fight for a $15 an hour minimum wage when no elected officials were campaigning for it, despite ongoing fast-food worker strikes. Kshama and Socialist Alternative spearheaded the successful fight, alongside a united movement of labor, workers, and socialists to make Seattle the first major city to win the $15 minimum wage.

The $15 movement spread like wildfire across the country after that. Kshama’s office became a center for working-class resistance, helping workers, tenants, people of color, LGBTQ people, immigrants and indigenous people fight for better conditions in their workplaces and communities.

Kshama’s 2013 election was also the first big breakthrough for socialists at the ballot box, giving confidence to other left activists that they could defeat corporate power and the political establishment. Like Bernie Sanders’ 2016 and 2020 campaigns, which also refused corporate money, Kshama’s election was a demonstration of the huge potential for independent working class politics in the U.S.; this was reinforced through Sawant’s re-election in 2015.

To win gains for workers, young people and the oppressed, elections are not enough though. Political office must be used by socialists to build movements and increase working-class consciousness to change society, and Kshama Sawant and Socialist Alternative in Seattle have been a shining example of how this can be done. Kshama has explained again and again that what could be won inside city hall largely depended on the strength of movements outside, while actively calling for and helping to build those struggles.

Countless victories many previously thought unwinnable have been won in Seattle over the past seven years using this approach. The Amazon Tax, landmark renters’ rights laws, the establishment of Indigenous People’s Day, blocking the building of a monumental police bunker – these are only a handful of examples.

In 2019, Kshama was re-elected again, despite corporations from Amazon to Puget Sound Energy dumping over $4 million into corporate PACs to elect pro-business candidates across the city. Her opponent, Egan Orion, was the second biggest recipient of corporate PAC money in Seattle City Council history. But with hundreds of volunteers, $575,000 raised from a record-breaking 7,900 donors (with a median donation of just $20!), and a bold working class program, Kshama secured her seat.

On the heels of this victory, she and Socialist Alternative in Seattle immediately got to work spearheading a movement to Tax Amazon, again. The initial Amazon Tax that was passed in 2018 was shamefully repealed just a month after being passed by Democrats on the City Council who succumbed to threats from Amazon. This time around, a democratically-organized movement of thousands of socialist, labor, climate, and racial justice activists won an estimated $210-240 million a year tax on big business, which will be used to create tens of thousands of green union jobs by building permanently affordable housing.

When the BLM movement exploded after the murder of George Floyd, Kshama led an effort to pass a first in the nation ban on the use of chemical weapons by the police, having herself been teargassed while participating in the protests.

Nobody in Seattle has caused more headaches for the political establishment over the past seven years than Kshama Sawant. “I wear the badge of socialist with honor,” she declared in her January 2014 inauguration speech. She promised at that time: “There will be no backroom deals with corporations or their political servants. There will be no rotten sell-out of the people I represent.” And she has surely delivered.