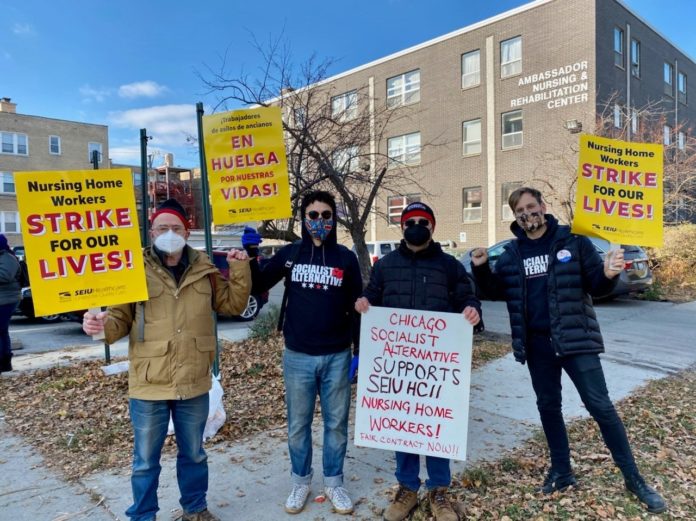 Zack Murstein is a member of UFCW Local 881 in Chicago, IL and a member of Chicago Socialist Alternative.

On November 23, Certified Nursing Assistants (CNAs) and other healthcare workers went on strike at 11 Chicagoland area nursing homes owned by the for-profit chain Infinity. The 700 SEIU HCII workers at Infinity were fighting to bring their facilities into line with a master contract covering over 100 other nursing homes in Illinois and Indiana. Other demands included proper staffing, a safer environment, hazard pay, and more PPE during the pandemic. All of these homes are for-profit facilities funded from Medicare and Medicaid. CNA’s sought a starting wage of $15.50 statewide, while housekeepers and laundry workers demanded $14.50 an hour outside of Chicago and $15 an hour in Chicago (which will be the legal minimum wage in the city as of July 1, 2021).

Chicago Socialist Alternative walked the picket lines with workers who have done the vital, difficult work of patient care for more than 20 years and still make less than $15 an hour. The owner of the chain, Moishe Gubin, received $12.7 million under the CARES Act – with no regulations on where exactly that money would go. Striking workers chanted “Moishe Gubin, rich and rude, we don’t like your attitude!” and “Sign the contract, pay the people!”

Gubin owns 70 nursing homes in eight states, with over 5,400 skilled nursing beds just in Illinois and Indiana. While insisting he can’t afford to pay his workers a living wage, Gubin has found the resources to buy other assets, such as an $88 million Florida bank – with the stated intention of buying more banks.

In Illinois, more than half the people who have died from COVID-19 were residents in nursing homes. This horrific figure means there were on average nine deaths for every 100 residents, which is almost 100 times the statewide per capita death rate from the disease. For-profit nursing home funding nationwide paradoxically depends almost exclusively on public funding. In practice, the nonprofit sector generally serves middle-class patients with private insurance which allows them more choices, and the for-profit sector serves people whose only insurance is Medicare and Medicaid. It is well documented that for-profit nursing homes deliver worse outcomes for patients.

An investigation by Chicago public radio has found that “In the 20 counties hit hardest by the virus, for-profit nursing homes have had nearly double the death rates as nonprofit facilities.” Gubin’s chain, Infinity, includes City View Multicare Center in Cicero, which has had 249 COVID-19 cases, and Niles Nursing & Rehabilitation, which has had 54 COVID-related deaths, the most at any long-term care facility in the state.

Workers told Socialist Alternative that before the pandemic they had five CNA’s per shift for a floor with 60 residents, who are housed two, three, and four to a room, and roughly half of whom cannot eat or use the bathroom unaided. Early in the pandemic they were not provided with adequate PPE and were not being told who was or was not testing positive for COVID-19. Under pressure from the union, the employer began to provide PPE and $200 a month in hazard pay for March, April, and May, but then the payments stopped and staff began to leave. The result has been dangerously low staffing levels, on some shifts as low as three CNAs for 60 residents. Workers were told that they would lose their jobs if they went on strike while facing illegal retaliation. This included the termination of a worker raising a newborn child.

The picket lines ran daily from 6:00 am to 2:00 pm, divided into morning and afternoon shifts. On the first day of the strike, there was full media coverage and for the first few days, picket lines were monitored by Chicago cops. Workers were replaced by temporary agency workers, but the nursing homes struggled to hire a sufficient number. Inside the homes, residents overwhelmingly sided with the strikers, putting up window signs in support and sabotaging the scabs in various ways to make their days as unpleasant as possible. The pickets included daily activity such as chanting to the song “On Strike” by GmacCash and dancing to “Ain’t No Stopping Us Now” by Mcfadden and Whitehead.

UPS, which is represented in Chicago by Teamsters Local 705 respected the picket lines; however, non-union truck companies such as Fed-EX crossed the picket. At one of the pickets early in the strike, a truck driver arrived to pick up a medical device from one of the residents in the home – not medically essential, because the device just needed to be picked up rather than delivered for the necessity of the resident. When workers attempted to stop the truck, the driver forcefully crossed the picket, claiming he had a wife and kids to feed. Naturally this cut no ice with the workers who shouted back that all of them have families to take care of, and they made sure to make the driver nervous enough that he had trouble finding his way out of the parking lot by the time he was done with his work. Some days into the strike, the police stopped showing up, forcing the employer to hire private security guards to sit all day outside the facility and protect the scabs.

As workers were on the picket past the Thanksgiving holiday, they grew tired and eager to reach a deal, but refused to cave to anything that wasn’t put in writing. Conditions inside the nursing homes grew out of hand as residents dearly missed their caregivers. Although the morning pickets were larger than in the afternoon, the second shift was able to maintain high energy.

Due to the pressure put on local legislators by the union and the disabled community, Illinois Governor JB Pritzker responded stating “Infinity got significant government funding, and it’s important that workers see that funding.”  Religious leaders such as Jesse Jackson, Michael Pfleger, and Bishop Travis spoke on behalf of the strike as workers joined to sing the anthem “We Shall Overcome.”

Every day when SEIU HCII was told they were inching closer to a bargain, Gubin kept postponing the deal by testing how much momentum the union had to keep going out on the picket line daily. Although the union felt certain they had already won, workers needed to be out on the picket because Gubin could not be trusted.  When the deal was finally reached, all workers won a $1/hr raise with an average increase of $2/hr (40 cent increase at the crack of 2020). Hazard pay for the pandemic increased $2-2.50/hour with five additional sick days (beforehand they only had six). They also won guaranteed PPE and instead of back pay, full timers received $500 of bonus pay, while part time workers received $200.

As we go to press, a contract has been signed and workers are back on the job, faced with cleaning up the messes left by agency scabs, but welcomed back by their patients and knowing that they beat their boss – who had originally walked away from the bargaining table a few days into the strike. Workers who have never been on strike before have felt their strength. In the words of a striking picket captain: “Instead of us just complaining about something we didn’t like, we went out and did something about it. My first strike, and I can say it was actually a success. My co-workers won’t worry about going on strike again. Now that they’ve done it they’re not afraid.”

Every working class person should applaud these workers for the fight they put up against this inhumane, greedy, multi-millionaire boss.

The labor movement needs to direct this fighting spirit into the wider struggle for a fully-funded, publicly owned national health care system. It is an absolute indictment of our system that while the non-profit sector serves the small minority of elderly people who can afford to pay out of pocket for a life of dignity, the vast majority who have to rely solely on Medicare and Medicaid are at the mercy of for-profit owners like Moshe Gubin, and even wealthier profiteers like Illinois’ former Governor Bruce “the ruiner” Rauner. These owners are parasites who make billions every year, entirely out of public funding, making obscene profits – as much as 28% in one documented case – entirely out of shaving the difference between the $129 billion they collect every year, and whatever is the least they can get away with for their residents and the dedicated staff who serve them.