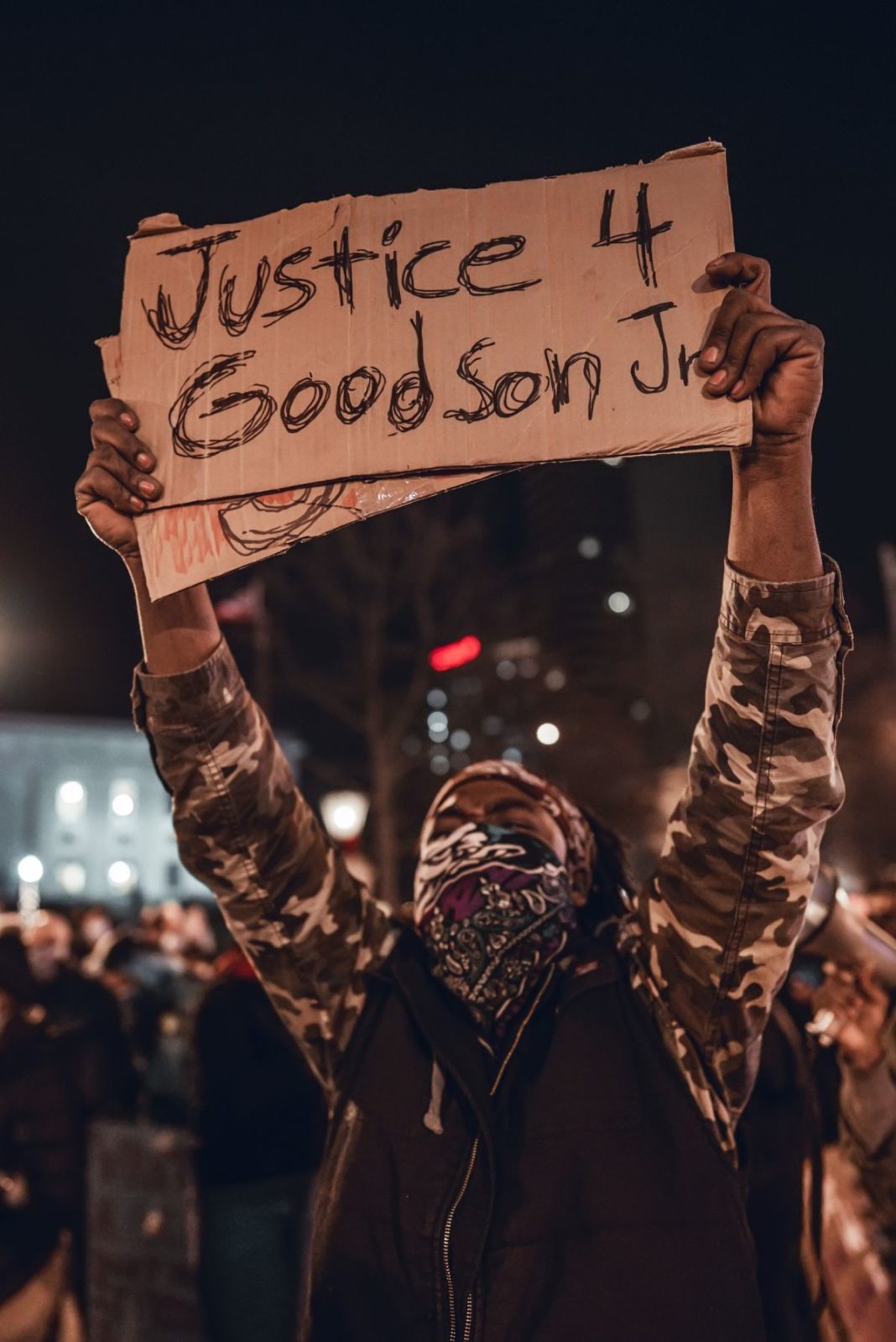 On December 4 in Columbus, Ohio, 23-year-old Casey Goodson Jr. was coming home from a dentist appointment. He was carrying a bag of Subway sandwiches to enjoy once he was inside. As he was turning the key to enter his home, Jason Meade, a Franklin County Sheriff’s deputy drew his weapon and shot Casey multiple times in the back. Casey fell through the doorway onto the floor of his home, in front of several of his family members, including his five-year-old brother and young cousins. The family’s lawyer says that Meade threatened Casey’s uncle and cousin with a gun.  According to Casey’s sister, the police handcuffed Casey as he lay dying.

We may never know exactly what happened outside the house in the moments before Casey’s murder. As a Sheriff deputy, Meade was not required to wear a body camera.  Meade’s lawyer alleges that Casey Goodson had a gun, which Casey had a legal right to carry since he possessed a concealed carry permit, though Casey’s family asserts that he was unarmed at the time of his murder. Meade’s lawyer also asserts that Casey refused to follow his commands, but Casey’s family members say they heard no verbal altercation before Goodson fell through the door. Regardless of the exact exchange in the moments before Casey was murdered, we can be very certain that Deputy Meade acted with a vicious disregard for human life. In the past, Meade has made light of police brutality while preaching at church.

“My son was murdered in cold blood, and we don’t have no answers as to why he was murdered… The coward that took his life does not have enough guts to answer the questions as to why my son’s life was taken,” said Casey’s mother in a recent statement.

A Fraught Investigation of Murder

Originally, the investigation of Casey’s death was to be carried out by the state attorney general’s Bureau of Criminal Investigations (BCI). Responding to the pressure of the June uprising against police violence, Columbus Mayor Andrew Ginther signed an executive order that would require police shootings to be investigated by the BCI. The Bureau refused the case since Columbus Police did not notify them until three days later. Currently, the investigation is in the hands of the Columbus Police Department and federal investigators. After the police murders of two Black men, 13-year-old Tyre King and 23-year-old Henry Green in 2016, none of the officers involved were indicted, leaving residents with little faith in the Columbus police department to carry out a fair investigation.

This mistrust is completely justified, we cannot trust the Columbus police or the FBI to conduct this investigation without bias. The next step in achieving justice for Casey Goodson Jr. is to launch an independent community-led investigation into his murder.

The stakes became even more apparent when, on December 22, just a few weeks after Casey’s death, another unarmed black man was killed by Columbus police. 47-year-old Andre Hill had just arrived at the home of a family friend to drop off some Christmas money when Officer Adam Coy shot and killed him within seconds of their encounter. It was 10 minutes before any of the officers present attempted to administer first aid, despite the recent protests over Casey Goodson, Jr.’s death.

But this doesn’t mean that public pressure has been completely ineffective. The mayor of Columbus fired Officer Coy for failing to turn on his body camera before confronting Andre, and Coy is currently being subjected to criminal investigations. This is not nearly enough to give justice to Andre and his family, but such police shootings rarely result in even this level of consequences for offending officers without pressure from below in the form of protest.

It is vital that people in Columbus and across the country continue to mobilize demanding justice for both Casey and Andre.

Continued Mobilization Needed to Win Justice for Casey and Andre

The Columbus community was quick to show their solidarity for Casey and his family.  In the days following his murder, peaceful demonstrations took place in downtown Columbus. The Columbus Education Association (CEA) teachers’ union released a statement calling for justice for Casey Goodson, demanding a full and transparent investigation into his death as well as the structural changes necessary for Columbus students and teachers of color to feel safe in their communities. Casey’s sixth grade math teacher also spoke at a recent rally, saying, “How can I teach students to be good citizens when we can’t trust our own law enforcement?”

Other unions should follow the lead of CEA and mobilize to Black Lives Matter rallies and protests across the country. Organized labor has unique power when it comes to demanding political reform and fighting racism. If we want bold, systemic change and an end to police violence and structural racism, we need a united and well-coordinated working class movement.

After the murder of George Floyd in May, working people took to the streets in unprecedented numbers, making bold demands like cutting bloated police budgets in half, and instead funding housing, jobs, and education. However, due to the lack of leadership and strategy to take the movement forward, establishment Democrats have been able to co-opt and water down the movement with half-baked promises (many of which they don’t even follow through on), and the ruling class has granted only symbolic concessions.

The major exception to this is in Seattle where – during the height of the movement – a first in the nation ban on chemical weapons was won alongside a major tax on Amazon to fund affordable housing. Not surprisingly, the leadership for these victories came from independent, socialist City Councilmember Kshama Sawant, not the Democratic Party.

Mass mobilizations in Columbus are a good start to holding the ruling class accountable for the racist system that killed Casey Goodson Jr.  Ultimately, however, a victory for this movement will require the involvement of the broadest section of working class people using every tool at their disposal, protests, direct action, and – crucially – strikes to win our demands. Socialist Alternative calls for: