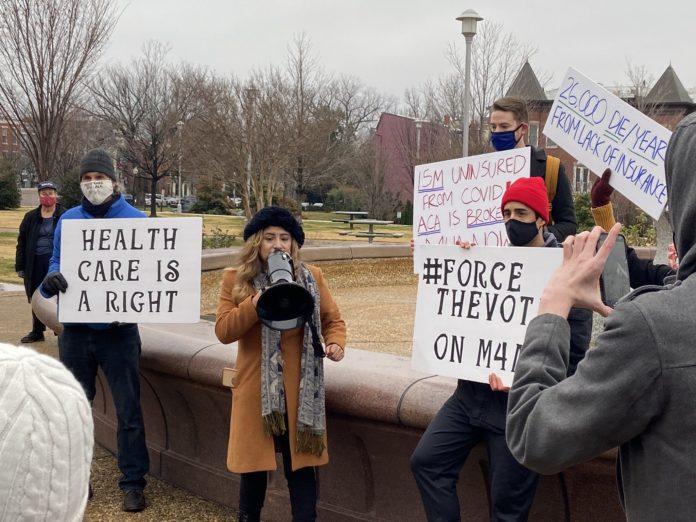 The COVID-19 pandemic has fully exposed, if there was still any doubt, the barbarity of the U.S. healthcare system. While 651 billionaires have gained almost $1 trillion during the pandemic, hundreds of thousands have died and millions have suffered, including nearly 15 million who have lost their employer-provided health insurance due to layoffs and closures. Meanwhile, Congress spits in our faces with their paltry offer of a $600 check.

The corporate-controlled Democratic Party, led by Nancy Pelosi and newly-elected President Joe Biden, are yet again showing that they do not represent working people. In the context of perhaps the biggest public health crisis in U.S. history, they refuse to even talk about Medicare for All, let alone other crucial programs like the Green New Deal. The Democrats have spent the last 4 years (and many more before that) sidelining and even demonizing progressives like Bernie Sanders and Alexandria Ocasio-Cortez, and propping up neoliberal defenders like Joe Biden. The approach of rejecting any working-class program is, in fact, the reason the Democratic Party never saw the much-vaunted “blue wave” materialize in the election, with key losses in House races to the Republicans.

Socialist Alternative has long argued that socialists and working people need to break from the Democrats and build our own working-class party. This isn’t a matter of preference, but a necessity for beating back neoliberal austerity and winning urgent reforms for the majority of America.

The financial crisis of 2008 tore open the veil to reveal the abject failure of capitalism for millions of workers. We have seen mass strikes, protests, and uprisings around the world, including in the United States. COVID-19 is doing the same. Masses of people are looking for an alternative to the status quo of exploitation, poverty, and misery. The Democrats are unable and unwilling to present an alternative for tens of millions of Americans, and the result has been the growth of far-right populists like Trump.

The Democratic leadership’s refusal to even hold a vote on Medicare for All is emblematic of their rottenness. This is why Socialist Alternative endorses the #ForceTheVote campaign, joining the Movement for a People’s Party, Briahna Joy Gray, Cornel West, Jimmy Dore, and others calling on movement-backed Democrats like AOC to refuse to vote for Nancy Pelosi as Speaker of the House unless she agrees to a debate and a floor vote on Medicare for All.

We support this tactic as it points in the direction of a fighting approach of using elected office to rally working people, standing in contrast to the dead-end strategy of backroom negotiations, which AOC has unfortunately continued to defend. If we want to win Medicare for All, or any other crucial reforms for working people, we need a clear movement-building strategy – a strategy that understands that  open conflict with the political establishment is inevitable, and necessary, if we are to win anything meaningful.

If we can win a floor vote on Medicare for All, we can use that vote as a focal point for building our movement. We can focus the public eye on this life-or-death demand. We can work within our unions to win support. We can organize our forces to mount public pressure on Congress to concede to this massively popular demand.

“But we don’t have the votes!” some say. “The corporate Democrats will block us!” Then let them block us. AOC and other progressives should not be afraid to expose corporate Democrats in front of millions for what they are: servants of the status quo and enemies of working people.

A single vote on Medicare for All will not be enough, and Socialist Alternative would go further. We agree with Nick Brana and the Movement for a People’s Party when they say that this tactic should be a step towards breaking with the Democrats and building our own party. We think that socialists like AOC should make a clean break with the Democratic Party and put forward an independent candidate to challenge Pelosi on a strong, working class program.

Nancy Pelosi deserves not one ounce of support from genuine progressives. Her criminally inadequate approach to stimulus negotiations is just one example of her complete unwillingness to defend the interests of the working class.

In Seattle, Socialist Alternative has demonstrated how to win victories by taking an independent, movement-building approach to our city council seat held by Kshama Sawant. By using our office to build movements, we made Seattle the first major city in the country to pass a $15 minimum wage and won the historic Amazon Tax for affordable housing, against the united opposition of the establishment. A necessary part of our work has been Kshama and our office fearlessly exposing Seattle’s Democratic establishment.

It has not been easy. The ruling class has struck at us again and again, spending millions of dollars to remove Kshama from office. Right now, they are attacking us again, organizing a right-wing recall campaign against Kshama. Open conflict with the establishment is never easy, but it’s the only way that working people have ever won.

In our view, the #ForceTheVote campaign points in the right direction — away from backroom negotiations and towards open conflict with the corporate Democrats who oppose Medicare for All. Socialist Alternative endorses the campaign, and we call on all other socialists, including the Democratic Socialists of America, to do the same.