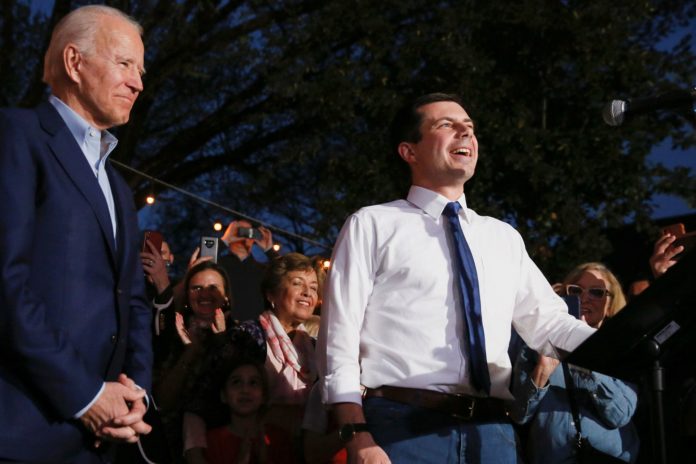 After proving himself to be most subservient to the Democratic Party’s top brass leadership by sacrificing his primary campaign to save Biden’s, Mayor Pete has been nominated as the Transportation Secretary in the incoming Biden administration. The top transportation post oversees a sprawling department with 55,000 employees. That’s roughly half the population of South Bend, Indiana, where Pete was Mayor.

The department’s budget will be almost $90 billion, which will fund highways and transit systems, operate air traffic control, oversee the nation’s airline industry, along with railroads, commercial trucking, mass transit including busing and light-rail, and pipelines.

A Faithful Servant for the Rich

It’s important to remember how Pete got here. As a presidential candidate for the Democratic Party’s nomination, he claimed “victory” in the Iowa caucus during the chaotic and delayed release of partial results. Once all was said and done, Bernie won Iowa. But the confusion allowed Pete to sail into a very formidable position in the race. Pete then, as a frontrunner, dropped out of the race alongside Amy Klobuchar and Tom Steyer on the eve of Super Tuesday. A maneuver solely executed so that the entire anti-Bernie, moderate Democratic vote could be consolidated behind the failing Joe Biden campaign. Pete displayed his fealty to the corporate establishment by sacrificing his campaign to help them deny Bernie the party nomination.

However, his loyalty to the corporate establishment was never in question. Forty billionaires and their spouses donated to his presidential campaign making him the candidate with the most support from billionaires. He also led the field in Wall Street contributions. And I think we probably all remember when we learned what a “wine cave” is. Just another venue for politicians like Pete to court wealthy donors by promising to serve their interest over $900-a-bottle wine.

Pete’s Past with Mckinsey & Co.

Perhaps what makes him a most reliable, credentialed administrator for the rich is his time served at Mckinsey & Co. This company is cartoonishly evil. Late last month, the New York Times reported that partners at the consulting firm had discussed how the Purdue pharmaceutical company could “turbocharge” opioid sales in the midst of an opioid overdose pandemic. The completely insidious plan that they apparently came up with was for Purdue to pay pharmacies rebates when their customers died from overdose.

Mckinsey also worked with Immigration and Customs Enforcement (ICE) starting during the Obama administration and into the Trump administration. Mckinsey recommended that the agency responsible for detaining and deporting undocumented immigrants do it more effeciently by cutting costs on food and medical care for detainiees, reduce maintenance of detention facilities, and redirect long-term detainees to cheaper and more dangerous county jails.

Pete is certainly not the only Mckinsey alum to serve in the Democratic Party. Biden will continue the tradition set by both the Clinton and Obama administrations by staffing his cabinet and advisors with ex-Mckinsey consultants. A company that, according to business journalists, is the greatest legitimizer of mass layoffs by encouraging companies to lay off workers not only in times of recession, but in better times too, just to squeeze all the profits available.

Pete would and has claimed that when he was a consultant at Mckinsey he didn’t work with Purdue or ICE, and wasn’t involved in Mckinsey’s worst crimes. Pete will claim this while also leaning on his experience at Mckinsey as evidence that he’s really smart and qualified, because the firm is well-known for hiring Ivy League graduates, and its sterling reputation among the ruling class. So which is it Pete?

What we do know from Pete’s time at McKinsey is that he certainly didn’t stand against the stream or make the company any less terrible. What he did may have contributed to mass layoffs at the health insurance firm Blue Cross Blue Shield. Another one of his clients there included the U.S. Postal Service. In 2010 McKinsey suggested that USPS cut costs by replacing career employees with other workers that they could pay less at reduced benefits. He also assisted U.S. imperialism’s efforts to exploit Afghanistan’s natural resources, a project that was incredibly destructive to the environment while being a boondoggle for contractors using taxpayer money.

When he was elected mayor of South Bend in 2012, he envisioned the city to be a “beta city” to test big tech initiatives like “smart sewers.” In 2018 he accepted a Bloomberg Mayor’s grant to expand ride-share service in the city. This is especially concerning in the aftermath of Proposition 22 passing in California that exempts ride-share companies like Uber and Lyft from state workplace laws and strips their workers of basic, essential protections. This sounds like the very kind of thing that comes out of Mckinsey boardrooms. During his confirmation hearing he should be asked directly to respond to Prop 22 as Uber and Lyft want to replicate it across the country while directly challenging mass public transit as their competition.

Mayor Pete is very committed to this “beta city” idea that lets big tech companies use cities like South Bend as their testing laboratory. While he was Mayor in 2016 the city removed a traffic light at an intersection to make way for the installation of a “Smart Streets” project. Shortly afterwards an 11-year-old boy, Tristan Moore, and his 8-year-old brother were crossing the street when Tristian was struck by a vehicle and was pronounced dead a short time later at the hospital. Pete was so determined not to let this get in the way of his vision of a tech dystopia that he so cavalierly dismissed the accident by blaming the children that crossed the street, saying, “two little boys ran across the street and one of them didn’t make it.” He later stated that it was unfair to point the finger at him for the tragedy. Cool guy to be Transportation Secretary. This is appalling and should obviously disqualify to be in charge of the nation’s transportation systems .

While Pete is being celebrated as the first openly LGBTQ person to be nominated for a prominent cabinet position needing Senate approval, this doesn’t by any means automatically make him a friend of oppressed people. Activists in South Bend organizing under Black Lives Matter continue to criticize his tenure as mayor in the city for his housing and policing policies. Many low income residents in the city are worried that his redevelopment programs will lead to gentrification that will price them out of their neighborhoods. While he was Mayor a Black man named Eric Logan was shot and killed by a white police officer. Many were not satisfied with his response that seemed more like a coverup. He’s also involved in the city’s costliest court battle ever that is trying to suppress audio recordings of police officers making racist statements.

Biden picking Pete to serve in his Cabinet is just the latest attempt by the establishment to appease radicalizing people of marginalized groups without challenging the capitalist interests that oppress them. Pete is just one of many of Biden’s picks that have terrible records defending the interests of working class, LGBTQ, and all oppressed people.

No Solutions for Building Better Transit

Biden has expressed ambitions to improve transportation systems across the country that will “create millions of good, union jobs rebuilding America’s crumbling infrastructure.” He also vows to provide every American city with 100,000 or more residents with high-quality, zero-emissions public transportation options that would include “improving existing transit and bus lines.”

As a bus driver with Metro Transit in Minneapolis and member of Amalgamated Transit Union (ATU) I certainly recognize the severe crisis that public transit agencies like the one I work for are in. We desperately need federal assistance for public transit all across the country. Ridership is way down from passengers wanting to avoid close indoor public spaces like a city bus or train during a public health crisis. Transit workers are all too aware of the health risks on public transit, but the companies and management are using it as an excuse to attack the gains that we have made in our union contracts. Without proper funding they don’t want to provide the safety we need to do our jobs, or the increased pay that we deserve.

Trump also pledged to make big investments to improve transportation infrastructure, but never did it even with a Republican majority in the Senate. Depending on the outcome of the two Senate races in Georgia, it’s likely the Democrats won’t take back the Senate, but even if they did it’s unlikely Biden would invest in public transit on the scale needed. Members of both parties agree that infrastructure spending is desperately needed, but the corporate interests in both parties limit the kind of transportation systems to what is acceptable to big business. Biden is including Uber executives on his transition team. Uber sees mass public transit as a threat to their potential privatized market share. This kind of corporate interest will be opposed to any mass public transit plans Biden or Pete may have.

Biden has proposed to repeal some of Trump’s corporate tax cuts and increase the federal gas tax to fund his transportation initiatives. Corporations and big business should absolutely be taxed to pay for public services, but simply repealing Trump’s corporate tax cuts doesn’t go nearly far enough. Not to mention the federal gas tax is a regressive tax on working people and similar measures sparked revolts from working people across the world, from France to Ecuador. Working people already sacrifice enough as it is for corporations to profit.

What we need instead is a massive Green New Deal jobs program where our existing public transit systems are overhauled and made more sustainable, efficient, and accessible. This would put millions to work in socially useful jobs. The money to pay for such an initiative is sitting in the pockets of billionaires who’ve increased their wealth by huge margins during this pandemic.

Pete’s Department of Transportation, and the Biden Administration more generally, will be hostile to policies like this because they interfere with the profits of their backers. Just like we saw with the stimulus negotiations, any aspirations for robust transit legislation will be watered down among Democrats to make it “acceptable” to Republicans before they even start negotiating with them. Then once they start negotiating they will blame Republicans for what’s left being reduced to almost nothing. It’s a song and dance that plays all too often among corporate politicians.

Workers need our own political representation prepared to fight hard for the things we need, like the Green New Deal. Socialist Alternative has consistently argued that the working class needs its own political party. Unions like mine and the bigger labor federations that ATU is a part of like the AFL-CIO need to stop supporting the Democratic Party and hoping they will protect their interests. The Democratic Party isn’t even pretending to support workers when it fills itself out with Mckinsey cretins like Pete who’s solution to every problem seems to be: pay workers less, or lay workers off. Workers need to rely on our own strength and our own strategy of struggle and remember that guys like Pete represent the bosses, not us workers.