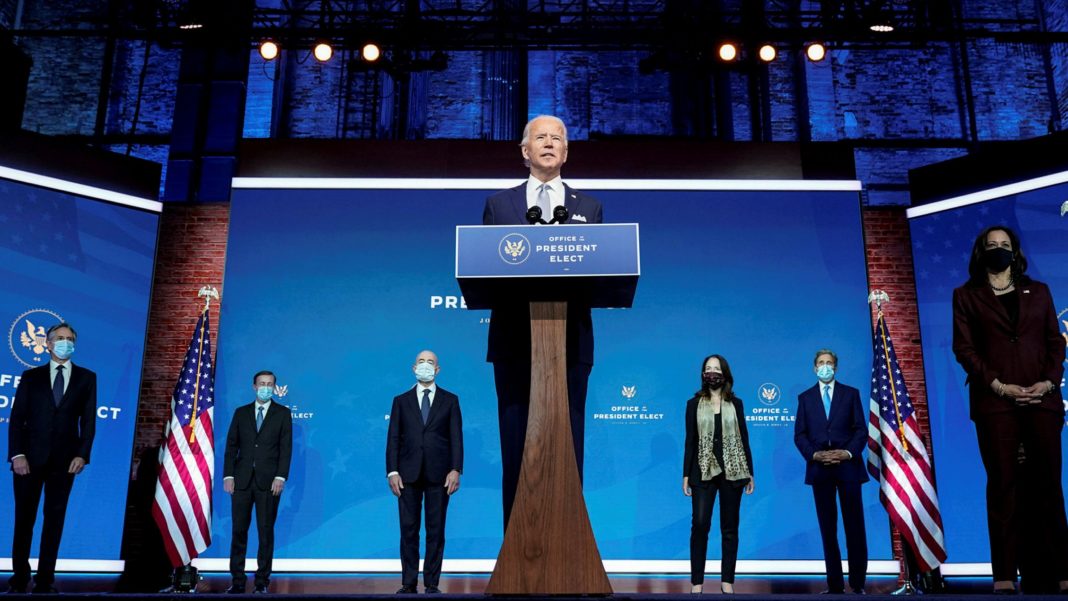 During the election, Biden promised that, as president, he would “repair the damage wrought by President Trump and chart a fundamentally different course for American foreign policy for the world as we find it today”. Now that Trump is out, there are expectations that the Biden administration will signify a “reset” in world relations.

Under Trump, U.S. foreign policy took the form of an erratic nationalism. Under an “America First” slogan, Trump pushed away from traditional allies of U.S. imperialism, instigated trade and tariff conflicts, and promised to get us out of the “endless wars.” At the same time, Trump pursued the interests of U.S. imperialism even more nakedly, engaging in dangerous saber-rattling in China and Iran, while defending the most reactionary policies of Israel and Saudi Arabia.

We can expect that a Biden administration will quickly take steps that will sharply distinguish the new administration, at least at the level of rhetoric, from Trump. However, there are problems with any hope for a “reset”. One serious question is the extent to which he will even be able to carry it out. The drive towards protectionism, trade wars, de-globalization and U.S.-China rivalry isn’t the product of one man’s personality. It’s the result of a deeper crisis of global capitalism that a Biden administration will be incapable of resolving.

The other problem is that the status quo that Biden wants to restore isn’t one worth celebrating. During his time in the senate, Biden was a staunch defender of U.S. imperialism, from the “war on drugs” in Latin America to the “war on terror” in the Middle East. He eagerly supported the invasion of Iraq and Afghanistan. All of these wars were conducted in the interests of corporate America. This continued during his tenure as Obama’s Vice President. This is the approach that Biden promises to return to. Any “reset” Biden conducts in world relations won’t represent the interests of working people at home or abroad.

A key foreign policy slogan in Biden’s election campaign was to “strengthen the coalition of democracies that stand with us.” Key to this would be rebuilding the relationships between the United States and its traditional allies who were sidelined by the Trump administration. Biden will seek to re-enter the Paris Climate Accord and the World Health Organization, which the U.S. left under Trump. More broadly Biden’s administration will re-engage with global capitalist institutions, such as NATO and the European Union, that Trump had sought to distance the U.S. from or actively undermine.

But there are limits to how much Biden will be able to “chart a fundamentally different course”. The Paris Climate Accord, for instance, is extremely limited, and the U.S. reentering will not in itself mean any serious change in the headlong rush to climate disaster. European capitalism will be happy that Biden will lean more heavily on the EU and NATO, while adopting a more adversarial approach towards Russia, as well as his opposition to Brexit. But the political and economic crisis in Europe can’t be resolved by a rebuilding of alliances. Brexit is seen as a done deal and other crises threaten the unity of European capitalism.

More broadly, ending Trump’s “America first” rhetoric and seeking to engage with the WTO can slow down the growth of protectionism. But while all of this adds up to a degree of change and will be perceived at least for a while as part of a return to “normal” in world relations, the enormous weakening of global capitalist institutions will not be fundamentally reversed. Nor will the trend towards deglobalization be reversed.

One of Biden’s advisers was quoted in the Financial Times describing Biden’s foreign policies as “China. China. China. Russia.” The Trump administration was dominated by an escalating tariff war with China that went against the neoliberal orthodoxy Biden stands for. But there are limits to which Biden is able to, or even wants to, change the dynamic of this conflict.

Biden may seek to come to an agreement with China to roll back tariffs but the U.S. policy of “engagement” with China which began with Nixon’s visit in 1972 and led to China joining the WTO in 2000 is now definitely over. The notion that China could be reformed into a “partner” of the U.S. and the Western powers has been replaced by a fear of its rising power. A section of the American ruling class now wants regime change in China. This is reflected in the crude rhetoric of Mike Pompeo who recently declared that countries faced a choice between “barbarism on the one side and freedom on the other…We’ve woken them up to the threat posed by this Marxist-Leninist monster.” The Democrats’ rhetoric will be different but the result will not be to de-escalate the conflict.

Even before Trump, Obama’s goal with the Trans Pacific Partnership (TPP) trade alliance that Trump pulled out of, was to “encircle” China and contain its further development. While the Obama administration refrained from a full-scale trade war, he said in a recent interview in The Atlantic that “if we hadn’t been going through a financial crisis, my posture toward China would have been more explicitly contentious around trade issues.” Michèle Flournoy, Biden’s proposed pick for Defense Secretary, has also taken a hard line in favor of building up the U.S. military presence in the South China Sea.

We can expect Biden to stress “human rights” as part of U.S. imperialism’s containment campaign to a much greater degree than Trump. And we can expect a reduction in overt sinophobic bigotry like Trump’s references to “the Chinese virus”. We should not expect any serious change in the conflict over technology including the U.S. exclusion of Huawei’s 5G network. Nor should we expect a reversal of the trend underway towards the decoupling of the U.S. and Chinese economies, with companies scaling back or pulling operations out of China and the breakup of the global supply chain into regional supply chains. But while U.S. imperialism may be able to build up a common front against China among a number of key capitalist countries it will do so from a position of significant weakness compared to even a decade ago. In reality, the conflict has and will continue to weaken both powers.

Biden’s attacks on China will highlight the “Communist” Party regime’s repression in Hong Kong and the detention of up to a million ethnic Muslim Uyghurs in the Xinjiang region. The CCP regime is indeed a brutal, chauvinist dictatorship. But the crimes of U.S. imperialism are even worse. From Vietnam to Iraq, the U.S. has slaughtered millions in the interests of defending the profit system. As socialists, we oppose all imperialism, including first and foremost “our own.”

In the Middle East, a “reset” in world relations would be nothing to celebrate. Biden was a staunch supporter of Bush’s “war on terror” and its continuation under the Obama administration. During the election, Biden consciously courted Bush administration figures like Colin Powell. His proposed cabinet members responsible for world relations – Michèle Flournoy for Defense Secretary and Anthony Blinken for Secretary of State – are all staunch representatives of the rotten imperialist approach to the Middle East based on backing dictators and waging wars to maintain control over oil.

Biden and his team will definitely try to pursue a different approach to the Iranian regime than Trump has. They are definitely committed to trying to revive the Iran nuclear deal which Trump exited but, in practice, this may prove impossible. Iran is indicating it will demand restitution for the sanctions regime under Trump which would probably be politically impossible for Biden to concede. Even then, the administration will have clear limits as to how far it will be prepared to go to restart the nuclear agreement, with Blinken assuring “we will continue nonnuclear sanctions as a strong hedge against Iranian misbehavior in other areas.” In the waning days of the Trump administration, Trump and his ally Netanyahu, the Israeli prime minister, are trying to provoke Iran into a direct conflict to make Biden’s task even harder. The latest move was the assassination of Iran’s leading nuclear scientist, Mohsen Fakhrizadeh, very likely by Israel.

There are indications that Biden will adopt a less friendly posture to the Saudi regime. The relationship with Netanyahu will be similarly frosty. But this says more about how friendly Trump was with the Saudi and Israeli governments than it does about unfriendly Biden will be. During the Obama administration, Biden, Blinken, and Flournoy maintained close ties with both countries, supporting the Saudi invasion of Yemen and increasing funding for Israel’s defense program.

Biden’s commitment to a “coalition of democracies” will face a serious test in the Middle East and North Africa. The approach of Biden and others came into question during the Arab Spring with mass uprisings directed against traditional U.S. allies in Egypt and Tunisia. The dictatorship of Abel el-Sisi in Egypt, which came to power in a counter-revolutionary coup will serve as a test to how committed Biden is to democracy. Trump was a staunch fan of Sisi and Obama, while criticizing Sisi, nonetheless restored the relationship between the U.S. and Egypt.

Under the Clinton administration, Biden was one of the chief architects of “Plan Colombia” a heavily militarized response to the drug trade focusing on massive military aid packages to the right-wing government in Colombia. This was accompanied with economic aid to Colombia which was tied to a commitment to privatization, free trade, and austerity. This resulted in massive human rights violations and growing poverty. Nonetheless, Biden held up Plan Colombia as one of his key foreign policy achievements during the election.

Under the Obama administration, Biden oversaw the Alliance for Prosperity and the Programma Frontera Sur in Central America and Mexico. These programs were geared towards stopping immigration at the source through providing financial aid to prop up highly militarized police forces in the region. In practice, this served to strengthen the repression and corruption that people were fleeing from in the first place.

As with China policy, Biden will avoid the overt racism that Trump put forward. But he will continue his own past policy of propping up right-wing U.S.-friendly governments in the region.

As Biden assumes the presidency, Latin America has seen a resurgence in mass struggle. There were mass protests in Ecuador and Chile in 2019. The electoral victory of the Movement Towards Socialism in Bolivia in October, overturning the right-wing coup that had deposed Evo Morales in 2019. Currently we’re seeing new mass struggles in Peru and Guatemala. All of these are directed against the very policies and governments Biden has promoted in the past. A Biden administration will only be an obstacle for these and future struggles.

The new wave of struggles in Latin America poses an alternative to the approaches of U.S. imperialism, whether led by Trump or Biden. International working-class struggle and solidarity can point the way for a genuinely “different course” for global politics.