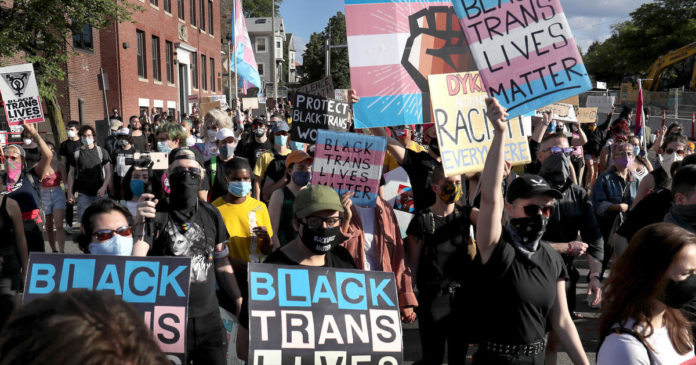 For transgender and genderqueer people, November 20 is a day of grief – a day that we honor the memory of trans people whose lives have been lost to transphobic violence. Transgender Day of Remembrance was first begun in 1999 to memorialize a Black trans woman, Rita Hester, who had been murdered in 1998  – and to honor all trans people who had been murdered in the years since.

In Trans Day of Remembrance celebrations, it’s often traditional to read out the names of all trans people murdered in the previous year. This somber act, both powerful and heartbreaking, always poses the same question for our community: how do we win a world without the routine murder of trans and genderqueer people? How do we win a world where we can stop reading off these names?

A Year of Loss

Trans and genderqueer people should not have to accept a status quo where our murders are a normal and expected part of life. A system in which free gender expression can end in a death sentence, legal or extralegal, is unacceptable.

This violence is the direct result of a system that routinely refuses basic rights to transgender people. In 24 states nationally, there are no laws preventing discrimination on the basis of gender identity. It is no wonder why violence against trans people is so prevalent when transphobic mistreatment in our public spaces, workplaces, and schools is permissible. Additionally, the “gay/trans panic” defense – which allows those accused of homophobic or transphobic violence to claim that the acts were the fault of the victim for expressing their sexual or gender identity – is still legal in 23 states.

We urgently need to build a struggle to end the legal discrimination against trans people in workplaces, schools, and public spaces. The feminist struggles around reproductive rights, and especially abortion access, hold an important lesson for us – just because a person technically has a right, doesn’t mean they automatically have the ability to exercise it. We see this on display with the ongoing threats to Roe v. Wade at the state, and possibly federal, level. Any fight for protections for trans rights will need to be ongoing, and will need to be linked up to the broader struggles against oppression and exploitation. A strong movement – one that ultimately points its aim at the entire capitalist system – is our only chance at hanging on to these victories once we’ve won them.

A key part of the fight for trans rights is the fight for trans-inclusive Medicare for All, something that would benefit the whole of the working class by getting rid of the parasitic private health care system. We also need high-quality, trans-inclusive, affordable public housing – a need that is shared by, also, millions of people as evictions loom across the nation.

We need a broad program of workplace protections for trans workers. This includes fighting for an end to “at-will” employment which allows trans people to be fired for their gender identity almost regardless of legal protections, because an employee can be let go at any time for any reason. Ending “at-will” employment would mean an employer would need a legitimate reason to terminate a trans employee, subject to arbitration by the employee’s union.

Winning a World of Free Expression

The slogan often associated with Trans Day of Remembrance is a paraphrased Mother Jones quote: “Mourn the dead, fight like hell for the living.” The depth of violence against trans people shows how much we have to win for our liberation. Our rights are not being denied to us by an abstract force, or simply by a group of needlessly vindictive politicians – our oppression is part and parcel of the capitalist system, and the exploitation of all workers comes down especially hard on us.

To win, we can’t fight just as trans people alone, but join with millions of people who also need what we do – affordable public housing, Medicare for All, workplace protections, and strong unions. We need to build mass movements that span across all races and genders, with leadership by a mass independent working-class party alongside labor unions. We got a small glimpse of what is possible this summer during the George Floyd uprisings, with Black Trans Lives Matter marches taking place after the deaths of Tony McDade in Tallahassee, Dominique “Rem’mie” Falls in Philadelphia, and Riah Milton in Ohio this summer.

To win transgender liberation, we need to build a society based on solidarity, not exploitation. For freedom to express our gender identity however we wish, we need a full transformation of society from capitalism to socialism. Through building strong movements to fight against discrimination and anti-trans violence, we can mount a struggle against the the system that oppresses us all.