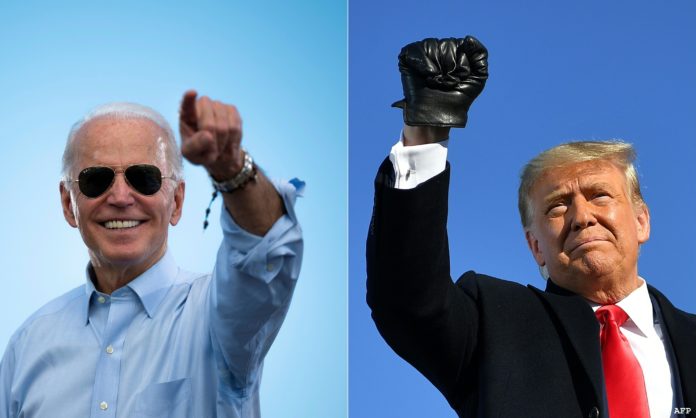 Take Action to Stop Trump from Stealing the Election

In order to drive Trump out of the White House, we need to disrupt “business as usual” with mass civil disobedience, student walkouts, and workplace action. We can’t just “wait and see” what happens; Trump is doing whatever he can to steal the election, and we need to take action quickly and decisively. Protests today (November 4th) should only be the beginning. Emergency workplace, campus, union, and community meetings should be organized to discuss the way forward for a monumental struggle to force Trump to concede. Many unions have declared their intention to strike if Trump tries to steal the election, and now we need to take action! The labor movement should take the lead in mobilizing a movement to drive him out.

In the middle of the night before the article was written, Trump declared victory despite the fact that millions of votes have not been counted. He called the continued vote counting a “fraud on the American people.” He can try to use Republican state legislatures and the courts, including the Supreme Court, to try to stop the votes from being counted. We need to get organized and fight back with the demand that every vote is counted!

The Trump administration has been preparing for this, and they’re moving the forces of right-wing reaction into motion. This isn’t the time for us to be paralyzed with fear. We also can’t depend on the Democratic Party leadership to fight Trump for us; the Democrats let Bush steal the election in 2000, and more recently, they let Christian fundamentalist Amy Coney Barrett get confirmed as a Supreme Court Justice without a single protest.

We need to rely on the strength of young, oppressed, and working people. Workers are essential to our economy, not the billionaire hoarders and looters. We have the power to shut this system down, and we need to urgently prepare for a general strike of workers and students combined with mass civil disobedience to force Trump to concede. A mass strike, backed up by a widespread uprising, would shake the billionaire class to their core, potentially forcing them to try to finally take measures against Trump’s authoritarianism. If we get organized and mobilized, we can win more than just pushing Trump out; we can fight for socialist policies that working people need to address the pandemic, climate change, institutional racism, and rampant inequality.

Voter suppression, a Republican specialty, was amped up this year in the context of the pandemic. On top of this, the electoral college is one of the most undemocratic institutions (along with the Supreme Court) in a U.S. political system designed to mask the rule of the billionaire class. Despite all this, Trump could have easily been defeated in a landslide, especially if Bernie Sanders had been the nominee. Trump has one of the lowest approval ratings of any incumbent Presidential candidate ever, and the Democrats waged a weak campaign against him with a horribly weak corporate candidate.

In a FoxNews exit poll yesterday, 72% of voters said they’re in favor of a government-run health-care program. In Florida, where Trump won, 61% of people voted for a ballot measure for a state-wide $15 an hour minimum wage. This shows that a clear appeal to working-class voters, which Bernie could have done effectively, would have likely defeated Trump in a landslide.

Trump has criminally mishandled the COVID pandemic – leading to hundreds of thousands of U.S. deaths – overseen mass unemployment and a further slide into poverty for millions of Americans, and yet the Democrats did all they could to “snatch defeat from the jaws of victory.” They put up an embarrassing candidate who was kept out of the public eye, didn’t have a “ground game” for their campaign in key swing states, refused to adopt wildly popular policies like Medicare for All and taxing the rich, and didn’t conduct a mass voter registration campaign to get millions of new voters who despise Trump. Yet the Democrats’ biggest failings weren’t just “mistakes” but instead due to their fundamental nature as a pro-corporate party controlled by billionaire backers.

In the final days of the campaign, Biden made clear he would never ban fracking, would never cut police funding, and would accept yet another right-wing addition to the Supreme Court. He (again!) said that cops should shoot suspects “in the leg” as his solution to racist police murders, and he refused to support Medicare for All as the election took place at the height of the pandemic. It comes as no surprise that an Axios poll showed that over 58% of Democratic voters were motivated to cast their ballots “against Trump” rather than “for Biden.”

All this left space for Trump to portray himself as an “outsider” despite being in the White House! Trump criticized Biden from the “left” on Biden’s racist 1994 Crime Bill, as well as his support for ongoing wars and pro-corporate trade deals. This was combined with a vicious cocktail of Trump’s racism, sexism, authoritarianism, appeals to the far right, conspiracy theories, and “law and order” rhetoric.

The Democratic Party leadership fought harder and more effectively against Bernie in the primary than they did against Trump in the general election. Yet the liberal pundits will seek to play a “blame game,” claiming that this situation is due to people who didn’t vote (especially people of color), independent voters, racist ideas in the white working class (which is a real factor), or Democrats being associated with the “radical left.” Instead, the Democratic Party leadership needs to look in the mirror to see who gave Trump the opening to try to steal this election. In addition, Sanders himself shouldn’t have capitulated to Biden, and he shouldn’t have self-censored his previous criticisms of the Democratic Party. This helped give room for Trump to appear as the anti-establishment candidate.

The Democratic Party leadership did nothing to prepare people for this entirely predictable outcome of a contested vote. Millions of us knew Trump was going to try to steal this election if given a chance to. They didn’t prepare for protests because the Democrats are a party of capitalism that values stability over the lives of working people. While many union leaders passed resolutions calling for general strikes, they did little to prepare their members to take action. That’s one reason why we need mass workplace, community, and campus meetings to discuss how to escalate our next steps.

If we’re able to build a strong rebellion that topples the Trump regime, then we shouldn’t stop there. We should get the movement organized to fight for an emergency stimulus plan for working people, a socialist Green New Deal, community control of the police, Medicare for All, and much more. The pandemic, climate change, economic crisis, and institutional racism won’t go away when Trump leaves the White House. We can’t depend on corporate-controlled Democrats to fundamentally change the situation, and Biden has said over and over that he won’t put forward the policies that we so desperately need.

If we force Trump to concede, then Biden will be overseeing one of the deepest crises in the history of U.S. capitalism. Biden will aim to serve the interests of the billionaire class, just as he has throughout his entire political career. This will lead millions to search for an alternative to the Democratic Party leadership and mainstream politics in general.

In this context, the far right could grow even more under a Biden Presidency. In order to effectively fight against right-wing racists, we need a program that can mobilize working people into action. We can’t limit our demands to what is acceptable to the Democratic Party leadership and their billionaire backers. Instead, we need to fight for the needs of billions of people worldwide rather than the billionaires. This type of struggle would inevitably conflict with the capitalist system itself.

This election shows that the Democrats can’t decisively defeat the far right. Socialist Alternative thinks we need a new party based on the working class. We’d advocate that this new party stands for seizing the wealth of the top corporations and putting them under democratic workers’ control and management. We’re part of an international movement on every continent to fight against the injustices of capitalism worldwide. This could lay the basis for ending all exploitation and oppression. Consider getting organized and joining us today!

Trump is the symptom. Capitalism is the disease. Socialism is the cure. Together, we can build a strong movement to topple Trump. This can help increase the confidence, organization, and education of workers in struggle. Today’s protests are only the beginning, and we need them to be a launching pad to fight for a socialist future!