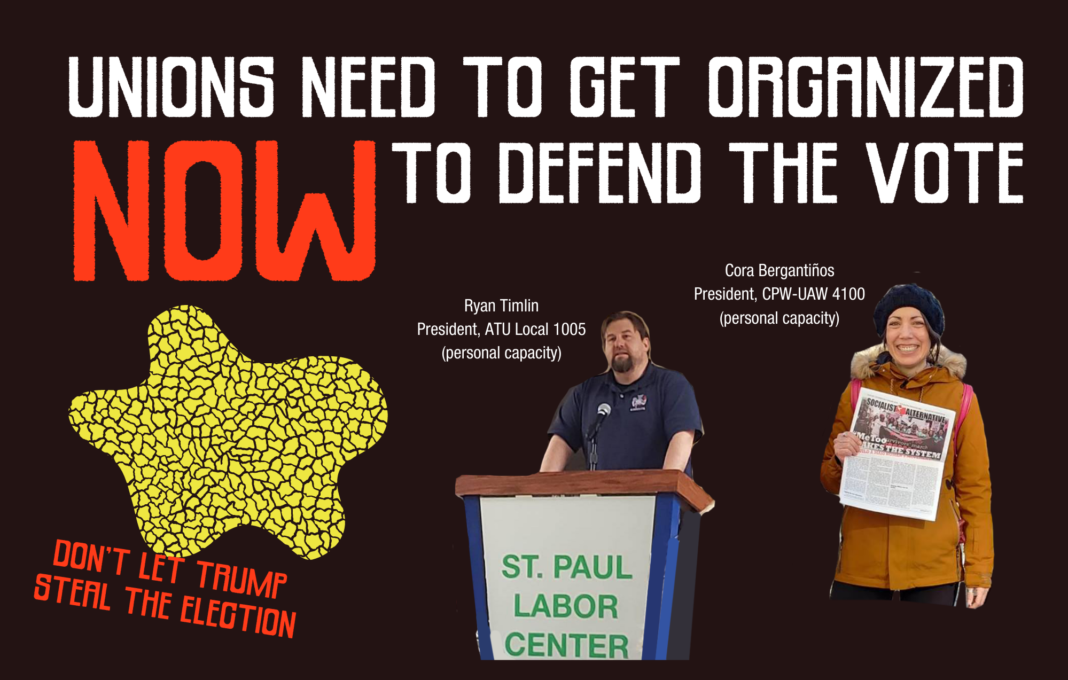 The stakes have never been higher. Working class people face the combined threat of the pandemic, an economic crisis, and climate change. Trump and the Republicans are looking for ways old and new to steal the election to prop up their reactionary regime. Trump’s said in more ways than one that he will refuse to leave office. Meanwhile, Biden opposes Medicare for All and a Green New Deal, and Kamala Harris supports fracking. Unions have an important role to play in not just defending the vote, but setting up an ongoing resistance to corporate politics-as-usual.

Trump has had a bad couple of weeks. First, his terrible debate performance and then his shock COVID-19 diagnosis. He is becoming more desperate to claw his way to a lead on election night. As election day approaches, Trump is ramping up attacks on the voting system in an effort to steal the election. He has falsely claimed mail in voting is “out of control”, is fear-mongering about election fraud, and given signals to his far-right vigilante supporters like the Proud Boys to “stand back and stand by” to intervene on election day.

While Mitch McConnell and the Republican establishment took steps to assure voters against a civil war, their party is working overtime to find ways to steal the election through voter disenfranchisement, obscure legal challenges and outright dirty tricks. In some states, these efforts could swing the election, and keep one of the most openly reactionary regimes in office for another four years.

For example, in Pennsylvania, a state Trump won by 44,000 votes in 2016, there is a fierce court battle over whether or not to count ballots that are received, not postmarked, after election day. In Wisconsin, laws disqualifying ballots that arrive late are already on the books, and could disqualify up to 100,000 voters, potentially flipping a state Trump won by 23,000 votes in 2016. Similar cases are pending in Arizona, Michigan and North Carolina.

Their System is Rigged

Many of these cases may ultimately end up in the Supreme Court, a totally undemocratic institution where Trump is about to secure his third appointee, Amy Coney Barrett, a pro-life idolougue who is a member of a misogynist cult.

Barrett’s likely nomination is a warning sign for what type of “resistance” working people can expect from the Democratic Party establishment. Rather than organizing mass resistance to Barrett’s terrifyingly reactionary ideas (or to Kavanaugh’s for that matter), they opposed her nomination on procedural grounds. This allowed the Republicans to gain ground, winning support among 48% of registered voters for her nomination before election day.

In the context of Trump attacking mail-in voting, threatening to mobilize vigilantes to the polls, and Republicans working to disenfranchise as many voters as possible, it’s a major mistake that Biden pledged to accept a certified Trump victory at the first debate. Before accepting the result, working class people would be correct to ask: an election certified by whom, and under what circumstances?

Unions and the Fight for Democratic Rights

If Trump encourages vigilantes to intimidate voters on Election Day, the labor movement needs to use its relative strength and power to mobilize the wider working class to defend polling places, potentially offering to escort voters to polls, etc. We encourage union and non-union workers across the country to join a national call at 5:00pm ET on Sunday, October 25th to discuss plans for ensuring every vote is counted. Register here!

Unions also need to prepare for the potentially longer fight if Trump, the Republicans, and their lawyers try to steal the election through voter disenfranchisement. It would be a mistake to fight them on their terrain, in the courts and county offices, away from working class people. Instead, we should organize mass demonstrations demanding every vote counts. This will almost certainly need to include direct actions, like the airport occupations that blocked Trump’s racist Muslim ban.

We can take a page from the heroic uprisings against racism this summer. At the height of the protests, Socialist Alternative members and bus drivers from ATU 1005 refused to help riot police transport protestors to jail, buying important time for the protests and forcing the establishment to find other plans for mass arrests. This inspired bus drivers in other cities too. Grocery store workers shut down work for 9 minutes and postal workers organized important solidarity actions.

Already the Rochester AFL-CIO is calling for a general strike if Trump tries to steal the election. A mass strike is the most powerful tool working class people have to bring down authoritarians, and it would be a big step forward. Similar resolutions should be passed across the country. We can start by introducing resolutions in our locals and move on to introducing resolutions to local, state, and national labor councils. To actually carry these resolutions out, we need to start organizing now, setting up rank-and-file led committees at every workplace to discuss next steps.

No Trust in The Democratic Party Elites

Biden’s premature pledge closely resembles Al Gore’s refusal to fight the outcome of the 2000 election against George W Bush. There, Republicans mobilized to stop a recount because it was trending towards Gore. Then, a GOP-leaning Supreme Court intervened and stopped the recount. The Democrats refused to mobilize to defend the vote in Florida, exposing that their primary concern is protecting capitalism’s institutions.

Besides offering a convenient argument against third parties, the other reason the Democrats threw the 2000 election was that they did not want to be beholden to the type of mass, working class movement that would have been needed to take on the conservative leaning Supreme Court, because such a movement would have undermined their corporate agenda. For decades, the Democratic Party has done everything it can to avoid returning to the tumultuous days where working class movements forced progressive court decisions like Roe v Wade in the first place.

There’s no reason to expect a corporate insider politician like Biden to mobilize resistance to Trump stealing the election, especially if it means being beholden to working class people after the election. His whole campaign is based on opposing popular policies like Medicare for All, a Green New Deal, and opposing “socialism.” It was one of the only parts of the debate where he and Trump totally agreed!

Millions took to the streets following Trump’s election in 2016. Instead of working to strengthen the movement, Democratic Party politicians and union leaders essentially told people to go home and wait for the next election. This terrible strategy has led to a situation where Trump somehow has the potential to win again, even though he is thoroughly exposed as a tax-dodging, corrupt billionaire who is the embodiment of “the swamp”. Working class people have tremendous power, way more than just voting, and unions are one organized expression of that power, but we need to start organizing now to defend the vote, and fight for the world based on people’s needs, not corporate greed.

Kshama Sawant Denounces Far Right Violence at the Capitol, Calls on Labor Unions, Social Movements, and Socialists to Organize to Shut Down the Far...

Never Another Trump: Why We Need a Working Class Party