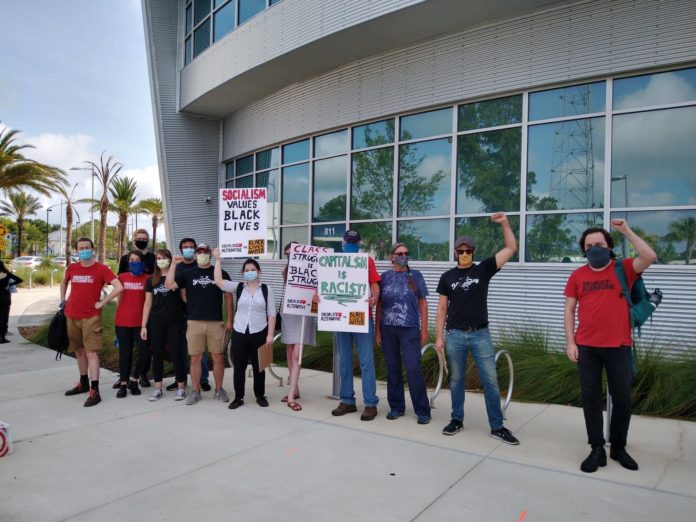 Capitalism’s crises are worsening everywhere, and as working class people look for genuine solutions, many are turning to socialist ideas. Socialist Alternative has seen a surge of interest and has been expanding in new areas throughout the country, including the South.

We have been holding online, weekly meetings where there is interest in SA across the South, in particular in Florida, Georgia, North Carolina, Tennessee and Texas. These meetings have featured discussions on current events like the Black Lives Matter uprising and the presidential race as well as the state of the labor movement and broader theoretical discussions on Marxist ideas. These discussions give members throughout the region a home base while we start getting organized in our communities and workplaces. Members from established branches across the country attend these meetings and train members in new areas in how to build a branch of Socialist Alternative.

Members across the South have attended Black Lives Matter protests this summer, bringing flyers and sign-up sheets to organize and further build the movement around a set of demands. In Orlando, Gainesville, Miami, Raleigh, New Orleans, Atlanta, Dallas and Houston, our members have discussed with other protesters the inextricable links between capitalism and racism.

In Gainesville, FL, we have held a number of rallies including one to defund the Gainesville Police Department and invest in communities instead. Socialist Alternative members across the South who are building new branches all passed out flyers at protests for an online meeting on next steps for the movement.

In the South where tenant laws are extremely weak, anti-eviction work has become another area of struggle for newly formed Socialist Alternative groups. COVID-19 and insufficient government relief has created a perfect storm of evictions that is only beginning. We have been canvassing door to door in Gainesville and discussing with friends and coworkers in Orlando about the failures of the for-profit housing system and how we can fight back. In Durham, NC we are getting active with Bull City Tenants’ United, a grassroots renters coalition.

In Atlanta, SA members set up our first ever community table in July. We used this to pass out flyers with the slogan “Fully Fund Our Schools” and talk to our neighbors about the Tax Amazon movement in Seattle. In Tennessee, a member has been discussing workplace safety under COVID-19 with her coworkers at Krogers, where PPE has been scant and workers have tested positive.

In a time of unprecedented crisis, it is crucial that we build the socialist movement everywhere, especially in the South where the bosses have used reactionary tactics to beat back the workers’ movement. The ruling-class tactics of vicious racism, anti-union propaganda, attacks on reproductive rights and LGBTQ people, and outright anti-worker Republican governance are hallmarks of the South. But the similarities with the rest of the country outweigh the differences: stagnating wages, rising rents, police violence, and capitalist oppression are universal, and demand a socialist movement that transcends regional boundaries.

Regardless of where you are, the best time to join the fight against capitalism is now. Socialist Alternative is an organization of working class fighters committed to changing the world, and regardless of where you live we urge you to become a member. While getting started building in a new area might seem difficult, being part of a fighting organization committed to building the socialist movement in every corner of the country and globe means you are not alone. Check the last page of this newspaper to see where we have existing branches, and if there isn’t one in your area, reach out about starting one today. We have a world to win!