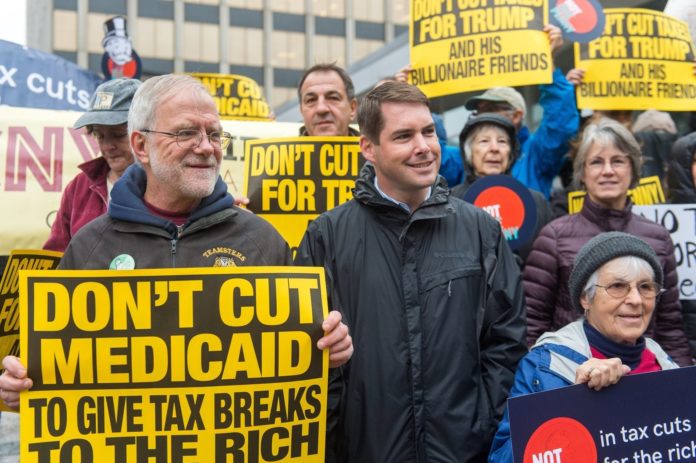 At the beginning of 2020, millions of Americans cheered as Bernie Sanders edged out a crowded Democratic primary field and emerged a seemingly unstoppable force. After his knockout win in Nevada, even the establishment struggled to identify a strategy to beat him before their convention.

As we know, however, they pulled it off. Socialist Alternative warned at every stage in both Bernie’s 2016 and 2020 campaigns that the Democratic Party leadership simply would not accept him as their nominee and that they would be prepared to pull out any number of dirty tricks to chop his campaign off at the knees. While we could not have predicted the exact way in which the Democratic Party would do this, our warnings were proven entirely correct.

In the days before Super Tuesday, what was once a dramatically bloated primary field shrunk down to two real candidates: Joe Biden and Bernie Sanders. While Elizabeth Warren shamefully refused to drop out of the race (serving as nothing more than a spoiler for Bernie) she still managed to walk away with abysmal results – losing even her own state of Massachusetts. On Super Tuesday, Joe Biden officially took his place as Democratic establishment mega-candidate, absorbing the campaigns of all the other corporate also-rans.

If it were truly the goal of the Democratic Party leadership to defeat Trump, why did they sideline the candidate best positioned to defeat him? Because defeating the increasingly authoritarian Donald Trump was far less important than defeating the movement-building socialist. Unfortunately, Bernie himself accepted this logic and bent the knee to the establishment.

Some on the left, particularly those around Jacobin magazine, dramatically underestimated the obstacles in Bernie’s path to the nomination. They declared the Democratic Party “Bernie’s party” after his win in Nevada. This misestimation of the Democratic Party has kept the American left trapped in this thoroughly corporate party.

Towards a New Party

In opposition to the lesser-evil politics that are responsible for putting figures like Donald Trump in the White House, Socialist Alternative is calling for a protest vote for Green Party candidate Howie Hawkins in this year’s presidential election. Howie Hawkins is a socialist and longstanding Teamster activist. His program includes much of what Bernie fought for, but Howie takes it even further. He’s calling for Medicare for All, 100% clean energy by 2030, free public college, community control of the police, and sweeping COVID-19 relief for working families.

But, while we agree with Howie’s platform, we do not think the Green Party will be the vehicle to build a left political alternative. Our support for Hawkins is because we have no time to waste in abandoning the corpse of the Democratic Party — a party that is responsible for time and again ceding ground to the right wing by dressing up their own corporate candidates in blue and expecting working people to vote for them.

If we are going to defeat big business politics, we need to form a new party entirely independent of the Democratic Party leadership that has real democratic structures and a pro-working class program. A recent poll found that 60% of Americans, regardless of political affiliation, want a new party. In 2016 we called on Bernie himself to take a bold stand and transform his campaign into the embryo of a new party, but he completely air-balled this historic opportunity both in 2016 and now.

Other organizations, like the Movement for a People’s Party, and figures like Nina Turner — president of Our Revolution — and RoseAnn DeMoro — former executive director of the National Nurses United —have stepped in to capture the hunger for a new political force in the U.S. This is a very positive step and organizations like the Democratic Socialists of America need to throw themselves into this process.

The fundamental reason that social movements of the past decade have failed to win dramatic change boils down to the complete lack of mass organizations of struggle in the U.S. The creation of a new mass or semi-mass political party in the U.S. could flip that on its head. It could be a home to social movements like Black Lives Matter, the labor movement, and the general struggles of workers against exploitation and oppression.

A significant protest vote for Howie Hawkins in the 2020 elections led by the left and socialists would be a step in this direction. It would signal the beginnings of a historic jailbreak from the Democratic Party.