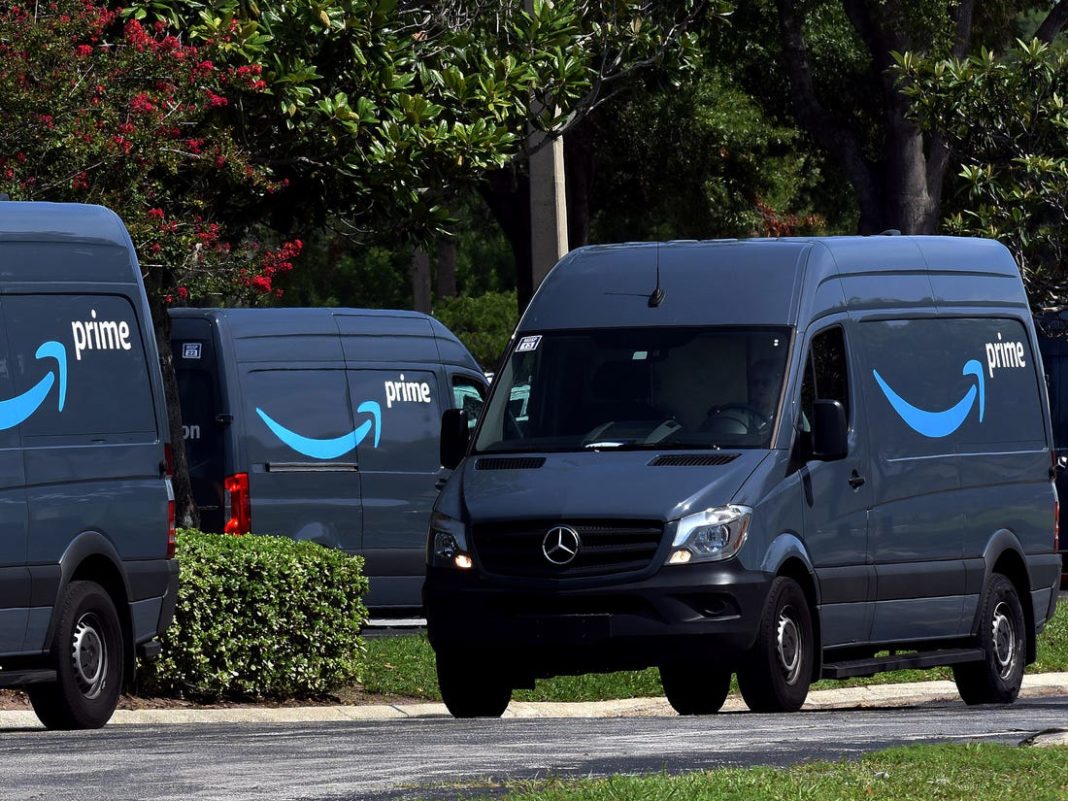 UPS and Amazon are expanding their use of video surveillance inside of delivery vehicles, adding to bosses’ ability to spy on workers.

Earlier this month, Estes Express Lines, an Amazon delivery contractor near Seattle (where I worked until recently), installed high-definition surveillance cameras inside of their delivery trucks. The device, a Samsara CM32, captures both video and audio from inside the truck’s cabin, allowing management to watch and listen to us at any time, from virtually anywhere.

That same week, according to Teamsters for a Democratic Union (TDU), UPS installed similar cameras in package cars at four delivery centers in Oklahoma and Texas, with intentions to expand the surveillance program around the country.

Our bosses at UPS and Amazon claim (somehow with a straight face) that the cameras are for “safety” purposes. But Amazon has never been concerned about the safety of its drivers or warehouse workers. After coronavirus began to spread, it took months for Amazon to give us even basic supplies like hand sanitizer, despite repeated requests. The company also refused to close warehouses with confirmed COVID-19 cases, ignoring early warnings by warehouse workers. Now at least eight Amazon workers have died of the virus.

Even before coronavirus, Amazon’s safety record was atrocious. For example, a 2018 report found that Amazon warehouses have an injury rate more than double (!) the industry average, making it more dangerous than working in a prison or an aluminum foundry. In Seattle, our contractor Estes has repeatedly violated trucking safety standards by making drivers work 13 days in a row or putting us on the road for 15-hour shifts, starting before dawn and finishing after sunset.

These surveillance cameras are not for safety. In reality, they are a way for UPS and Amazon to squeeze more profit out of us as workers and take away any remaining autonomy and privacy that we enjoy on the road. They also add to the growing arsenal of weapons that these companies can deploy against union organizers or political activists.

In the past decade, in-cab cameras have become ubiquitous in the industry. FedEx contractors began installing them in delivery fleets in 2017, and they quickly moved into regular FedEx vehicles in 2018. Much of Amazon’s fleet is already equipped with driver-facing dash cameras.

The grainy video feeds of the past have been replaced by HD, night-vision cameras with high-quality audio recording, which use artificial intelligence to track and analyze drivers’ every movement–from cell phone use to yawning to scratching our faces.

With a simple phone app, management can either review and save old video footage or spy on us in real-time. As a Samsara salesperson explained to Socialist Alternative, “If you’re curious what your driver is doing, you can go back 24 hours of drive time. You’re able to see it from any desktop or laptop computer. If you’re out for lunch, you can even see it through the phone app.”

Amazon is notorious for using algorithms, data, and surveillance to push its workers to the limits. In its warehouses, the company tracks every second away from the warehouse floor as “time off task,” pushing some workers to pee in bottles to save time, or forcing Muslim workers to choose between bathroom breaks and daily prayers. Warehouse pickers can be held to work quotas as high as 400 packages per hour, or about one package every 9 seconds. In 2018, Amazon patented designs for dystopian-sounding wristbands that use ultrasonic tracking technology to automatically “zap” workers who aren’t performing to management standards.

Just like the new cameras, this rampant surveillance and tracking is designed to increase productivity and squeeze every drop of profit from workers’ exhausted bodies. But do Amazon workers see a penny of those extra profits? Of course not. That money goes to wealthy shareholders and to executives like Jeff Bezos, whose wealth has nearly doubled since the beginning of the year, reaching over $200 billion.

For companies like Amazon, maximizing profit also means crushing any attempt by workers to organize a union or fight for better working conditions. In fact, Estes Express Lines, the same Amazon contractor who just installed dash cams in their Washington fleet, was exposed in April for attempting to intimidate workers at our station who were trying to organize for safer working conditions during COVID-19. Those same abusive and exploitative bosses can now spy on us, in real time, from their breakfast tables.

Drivers and Helpers: Organize Against Surveillance!

In-cab cameras have swept across the logistics industry, with two notable exceptions: until last week, package cars at UPS and the US Postal Service (USPS) were both camera-free.

This is not an accident. Both UPS and USPS are unionized, and union members have fought to protect their privacy. At UPS in 2018, for example, a local Teamsters union successfully fought to reverse the company’s decision to install cameras in employee lunch rooms.

Teamsters at UPS are now in a position to lead the fight against cameras in delivery trucks. Rank-and-file drivers, organized through TDU, have already taken the initiative by launching a petition against the cameras. UPS drivers should organize meetings of coworkers to consider additional steps, like slowdown strikes or sick-outs, that could be used if UPS tries to expand the program.

The union President James Hoffa, in contrast, has done nothing to organize a strong response. Hoffa is stepping down next year, but he has hand-picked a successor, Steve Vairma, to run in next year’s union elections. Rank-and-file Teamsters will rightly see defeating Hoffa and the Vairma slate as a necessary step toward building a fighting union at UPS.

Amazon workers also need to get organized. There have already been steps in this direction. In Minnesota, warehouse workers in Eagan and Shakopee have won a series of victories, from additional parking spaces to increased accommodation for Muslim workers during Ramadan. In Sacramento and Chicago, workers got organized and won paid-time off for all part-time Amazon workers. Sacramento workers successfully forced management to rehire two associates who had been wrongfully terminated.

The key to winning these victories has been well-organized collective actions, like workplace petitions and strikes. But in most places, a lack of organization is still the biggest barrier to successful action by workers.

When coronavirus began to spread in March, Amazon workers staged walkouts at warehouses in multiple cities, demanding safer working conditions. These walkouts showed the huge potential power of Amazon workers, but they lacked coordination and a clear strategy.

We need a coordinated class struggle approach to take on Amazon, and we need to build a serious core of supporters who are dedicated to building resistance from inside the company. This core needs to take the important steps of building workplace committees at warehouses, linking these groups together across the country, and carefully laying the basis for a company-wide fightback.

A dedicated core of activists could help to prepare the ground for the next explosion at Amazon when conditions at the company inevitably push workers into struggle once again, as they did in the first weeks of the coronavirus crisis.

Socialist Alternative is committed to building this fightback at Amazon, UPS, and across the industry. If you want to join our efforts, sign up now to join us.