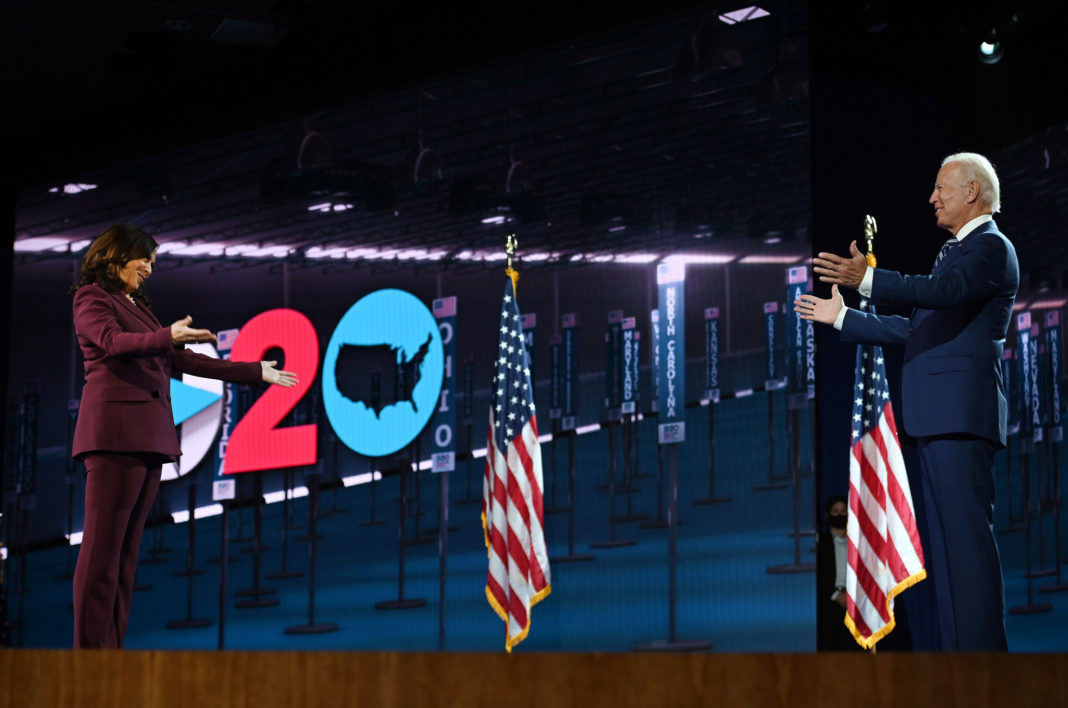 “Nothing will fundamentally change.” This promise made by Joe Biden to rich donors months ago has now been fully confirmed by the Democratic National Convention. Despite a primary which demonstrated huge support for policies like Medicare for All, free college education, a Green New Deal, and a mass movement calling for defunding the police, the Democratic Party consolidated around a candidate who represents none of those policies. Instead, the convention was focused on reassuring big business that it had purged such ideas and will be a reliable protector of their interests.

This also represents a doubling down on the failed strategy of 2016, where the Democratic Party put forward a candidate who represented the status quo, and campaigned on being the anti-Trump candidate. They went all out to stop Bernie Sanders, whose pro-working class policies are widely popular and could have excited and inspired voters. It was the abstention of nearly 10 million Obama voters from 2008 in 2016 that cost the Democrats the election.

The DNC failed to offer an alternative to workers facing the twin crises of COVID-19 and an emerging economic depression. Policies that would help the working class, ones that Bernie had campaigned on, were barely mentioned or completely absent. Instead they took a different approach. Corporations can’t always trust Trump due to his erratic choices, so the Democratic Party used this convention to present Biden to those corporations as a safe rational alternative.

The convention was also pitched at middle class suburbanite “swing voters” whom the establishment believes would be scared off by policies that were “too radical.” They did not speak about the reality facing tens of millions of working people who have lost their jobs, had their hours slashed, can’t pay the rent, or have lost healthcare. In the middle of the worst economic crisis since the Great Depression they didn’t even pretend to care about how this affects Black, Latino or white working-class people. They assume most of the poorer sections of the working class, disproportionately affected by COVID-19 and the depression, won’t vote anyway.

The very first night of the convention included not one, but four Republican speakers. This is in sharp contrast to the lack of speakers from the more progressive wing of the party. Of the four members of “the squad” who are some of the most popular politicians in the party, only Alexandria Ocasio-Cortez spoke, and only for 60 seconds in order to officially nominate Bernie Sanders. This was a conscious choice by the DNC, to feature Republicans over progressives because progressives like AOC represent a challenge to corporate interests. This is despite the capitulation of Bernie and AOC to the establishment by agreeing to support Biden and their attempt to convince young people to support this decrepit representative of the establishment.

Instead, by nominating Kamala Harris as the vice presidential candidate, the party leadership hoped to appease progressive voters based purely on identity politics. This is despite her law-and-order record as a prosecutor, which devastated the lives of Black families in California, and her failure to support the progressive program of Sanders in the primary. This is an example of the cynical approach of corporate politicians who are attempting to woo the left with empty promises and progressive images.

When Biden finally spoke, his speech was lacking any real plans, and full of empty platitudes like “my economic plan is all about jobs, dignity, respect and community.” The abstract ideas of dignity, respect, and community won’t help working people pay their rent, afford health insurance, or give relief to the millions who have been left unemployed. It also says nothing about how to achieve real change in the struggle against institutional racism. Biden has recently made clear he is for more funding for the police, not less. Instead of proposing real change, Biden doubled down on lackluster programs like the Affordable Care Act, while millions have no insurance, and millions more have medical debt due to the privatized healthcare system.

Trump’s failure to handle the pandemic and recession has seen his polling numbers drop significantly, and since he became the presumptive nominee, Biden has been leading in the polls, mostly due to the fact that he isn’t Trump. Those polls have been narrowing more recently though, as the Democrats continue to fail to put forward a fighting alternative to Trump. This failure is giving Trump a chance to win re-election.

Working Class is Not Welcome in the Democratic Party

None of this comes as a surprise to socialists. The Democratic Party establishment has consistently rejected the policies that will help working people, and instead embraced corporations and billionaires. This convention was just a consolidation around the candidate that they knew they wanted, that would show their allegiance to the capitalist class.

On military and financial support of Israel and its policy of annexation of land of the Palestinians as well as other foreign policy issues, the convention confirmed the imperialist goals of U.S. capitalism. Biden also competed with Trump for anti-Chinese rhetoric. Anyone looking for a shift of policy from aggressive pursuit of U.S. corporate interests overseas will have to look elsewhere from the Democratic Party.

Due to the pandemic, the convention itself was virtual, which meant a lack of protest or action against it, as was originally planned by activists. This gave it the appearance of credibility, of the left and right wings of the party coming together. In reality, it was a bolting of the door to shut progressives out of the room.

This convention should be a major wake up call to the idea that progressives are making progress in transforming the Democratic Party. Despite Bernie directing his supporters to reform the party, the party platform that was adopted lacked any significant progressive policies that Bernie, AOC and others have fought for.

The Democratic Party can never be a vehicle to represent the genuine interests of working class and oppressed people. The idea that the Democratic Party can be reformed has been a mistaken policy of much of the left in the U.S. for decades. We need to correct this. Instead of using our efforts to transform a party that consistently resists and rejects every attempt at reform, we should be fighting for a new party that embraces progressives and fights for working people. We need a party that can put forward an active strategy to defeat Trump. We need to go further than simply “not being Trump.” Instead we need to put forward a positive alternative, with policies and candidates that inspire working people to build movements, and fight for changes that positively improve their lives.