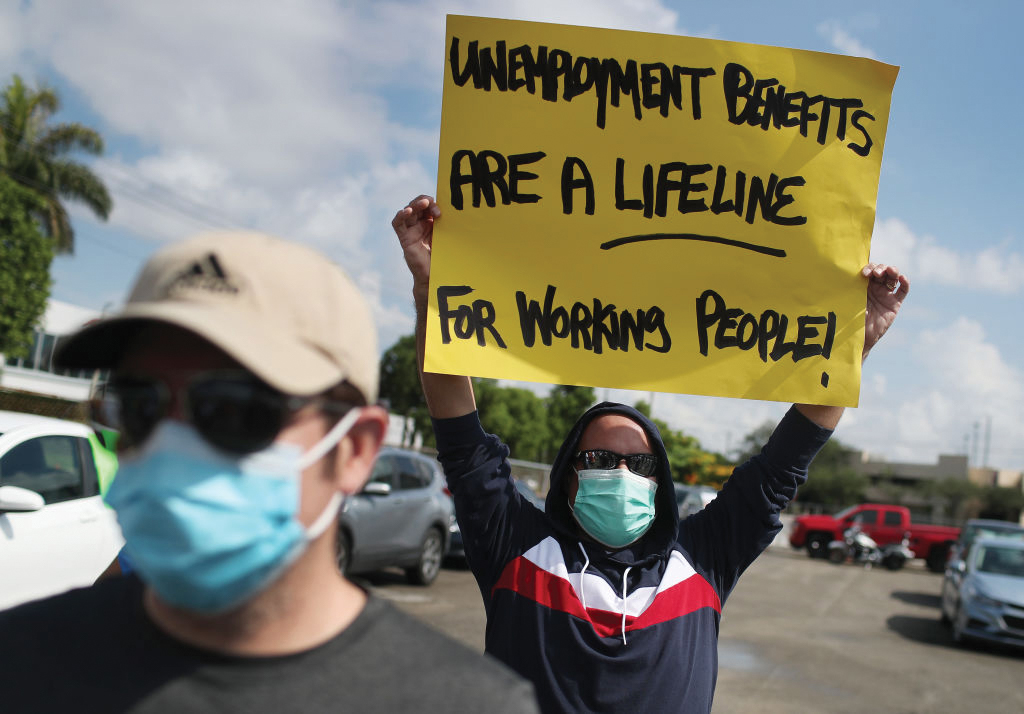 Whether you’re a laid-off food server, app driver, or construction worker, you are likely wondering how you will be able to juggle your income to meet your rent and all your bills in the upcoming months. Over 30 million workers are in the same boat as you. Will the politicians who have failed to contain the pandemic now further fail the unemployed?

Millions of ordinary Americans are glued to their TV screens watching politicians in Washington duke it out over an extension of the $600 per week unemployment top-up. It’s possible a resolution is reached in Congress soon, but likely that there will be a reduction in the benefits. Latresh Oseko in Baltimore told the New York Times, “I’m glued to it because I want to know, is there going to be hope for me? They’re fighting, and I have to watch them fight, but they have a place to sleep at night.”

In Washington every politician is eying November’s general election in relation to where they stand. Republicans in Congress support ending the $600 unemployment top-up and replacing it with a total check no greater than 70% of workers’ previous pay. Democrats are, for now, holding the line on an extension of the $600/week top-up through the end of the year. Trump has performed another act of political theater by issuing an executive order declaring a $400 per week top-up. Trump has no authority to direct federal spending and this executive order is setting him up for a battle in the courts — something he acknowledged when he said, “Yeah, probably we’ll get sued.”

While debating the limits of direct assistance to American workers, the political establishment in both parties have been silent about the explosion of billionaire wealth since the beginning of the pandemic. According to Forbes, “[the] U.S. billionaire class saw its wealth climb 20% between March 18 and June 17 with 29 new billionaires added to the total.” Even the most robust benefits received by ordinary Americans in this pandemic utterly pale in comparison to the benefits seen by the billionaire class.

Bail Out Workers, Not Wall Street

The additional unemployment benefits, combined with eviction moratoriums, have helped to prop up the economy and prevent an all out free fall. A lapse in these benefits could trigger devastating losses for millions of American workers and it is likely that due to this threat to the economy, some form of a compromise will be reached in Congress to extend limited benefits. The logic of many politicians in extending the benefits has little to do with the stability of workers’ lives and much more to do with keeping the capitalist economy afloat. If their primary concern was the health and safety of workers, politicians would be doing much more than providing this $600 per week check.

Both big business political parties refuse to consider a straight up cancellation of rent during the pandemic, an immediate move toward free, public healthcare, and the massive investment we need in public health, education, and social needs spending.

The Democratic Party hopes to quietly ascend to the White House, keeping Biden out of the picture and arguing for a continuation of the $600 top-up and increased federal aid to the states. However, at the same time Democrats are overseeing budget cuts and layoffs in state after state. New York’s Democratic Governor Andrew Cuomo, despite massive statewide budget shortfalls, is flatly refusing to consider a tax on the rich to pay for this crisis.

Whether Trump or Biden wins, the ruling class may be forced to take further measures to save the capitalist economy from complete collapse. But, as always, they will seek to make the working class pay for the crisis of their system.

We Need an Alternative

We need an extension of the $600 per month unemployment top-up. We need a cancellation of rent for the duration of this pandemic. We need Medicare for All urgently to address this public health crisis. We need a workers’ Green New Deal to put millions back to work transforming our crumbling infrastructure.

The rebellion triggered by the murder of George Floyd that burst onto the scene in May and June shows us the scale of fightback we’ll need. The storm of mass demonstrations that swept across the country, filling downtowns and Main Streets, even flowing into rural, small town America, put the billionaire class on the defensive. However, the concrete gains made by the movement have been fairly small. We need the organized working class to bring its social power to bear in the fight against racism in order to win more substantial change.

Organizing against the long list of injustices working people face right now will require a linking up of the struggles of all working people — be it against evictions, against racist policing, or against our individual bosses. Our movements have to be united. In the process of linking up these struggles we need to begin seriously considering what it would mean to have a political force to express the interests of working people.

Neither the Democratic nor Republican parties are our allies in the fight to win what we need. As we’ve seen time and again, their ultimate aim is to maintain the stability of the capitalist system and to placate their corporate donors. We need to begin building a political home for all of our struggles — a working class party that we can wield as a tool against the exploiters in the billionaire class as well as their political representatives.