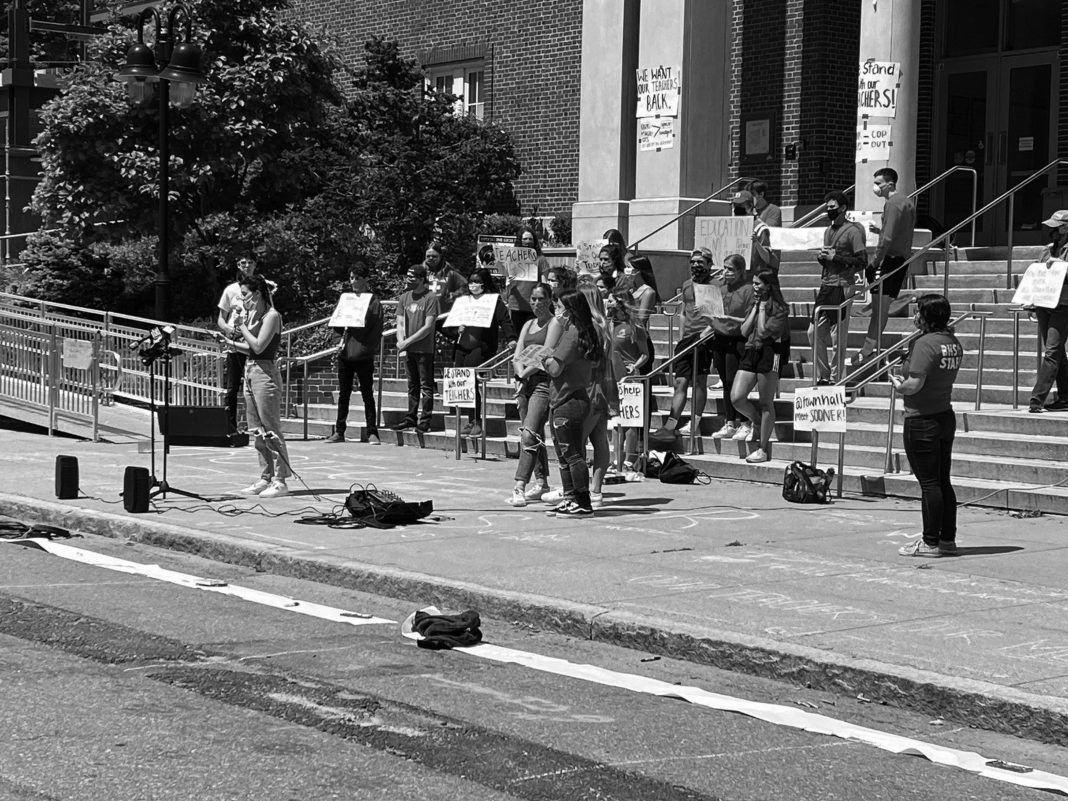 Teachers are currently faced with an impossible task: educating students online, many of whom don’t have access to technology, with little warning, preparation, or training. Teaching under COVID-19 is an entirely new job that no teacher signed up for. Now, because of budget crises, teachers across the country are facing mass layoffs, hiring freezes, and the risk of returning to school without proper safety measures. Educators are grappling with how to fight back.

We are up against brutal budget cuts. These will be far worse than the 2008 Recession, when 350,000 educators lost their jobs. Even now, in 2020, 29 states are providing less school funding than they were in 2008, and states are still down 135,000 jobs. Job losses were worse by April 2020 than in the entirety of the 2008 Recession. Poor and rural districts are going to be hit particularly hard by these budget cuts.

We are also anticipating ramped up attempts to privatize schools. Following Hurricane Katrina, many public schools shuttered and were replaced by privately run charter schools. In cities and states run by Democrats and Republicans, schools have suffered budget cuts and “charterization.” Meanwhile, the rich have received massive tax cuts over the past decade. The richest corporations in the world have increased their wealth substantially throughout the pandemic. Amazon’s CEO Jeff Bezos, the richest man in the world, has made over $33 billion.

The National Education Association, one of the largest unions in the country, is pointing to the HEROES Act – which passed the House of Representatives and is now stalled in the Senate – as a saving grace for educators because it proposes direct aid to state and local governments. Additional federal aid would be a very important step, as it could be used for public education and to protect hundreds of thousands of educators from potential layoffs.

However, the approach of the NEA is limited. Their call to action is “people should contact their Senators.” It will take much more than emailing our Senators to get the Republican controlled Senate to pass sweeping aid to state and local governments. The aid proposed in the HEROES Act is also just a drop in the bucket compared to what’s needed to provide students with the education they need! The NEA should instead be mounting a serious campaign for fully funded public education paid for by defunding the police and military and taxing the rich and big corporations.

As 80% of public K-12 funding goes to educator salaries, when cuts come, it will directly affect the education workforce. Our unions must actively take up the fight to defend public education jobs and learning conditions.

Educators can take inspiration from Somerville, Massachusetts where paraprofessionals just won a 25% salary increase, even in the context of statewide education budget cuts. This was the result of a year-long campaign by union educators and the community.

Given the lack of national coordination, states have been left up to their own devices when it comes to reopening schools. The guidelines released by the CDC call for smaller class sizes, but how will we have smaller classes if we don’t hire more staff?

Sweeping proposals have been put forward to address the need for social distancing in schools. One such proposal is shift-based learning where students come on alternating days of the week. This would help address the overcrowded classrooms that predate COVID-19, but even fitting half of the students in a classroom with proper social distancing would be difficult. In reality, we need dramatically reduced class sizes and more classrooms. This would require mass hiring of educators and the transformation of currently empty buildings and community spaces into additional classrooms.

Additionally, students will have been out of the classroom for nearly six months, meaning they will likely be behind socially, emotionally, and academically. This will be especially true for students who did not have adequate technology at home.

To respond to this, we need more counselors in schools, a reduced teacher-student ratio, professional development for educators, and wrap-around social services for students.

We must reimagine the very way that public education works, because even before the pandemic, our schools were severely underfunded. Our schools were failing to provide for many of our students, particularly students of color and students with disabilities. Educators and families must be the ones to decide when and how schools reopen. School or community-wide reopening committees must be set up made up of educators, parents, and students.

Fighting for the Schools We Deserve: Black Lives Matter

In many places, the call to defund the police to fund education is gaining steam. This is something educators should energetically take up. The backwards priorities of our society are exposed when state and local governments leave bloated police budgets intact while slashing school budgets. Fighting for Black students and educators means fighting for fully funded public education.

There have been calls across the country to get armed cops out of our schools and some school districts have already severed ties with local police departments. 42% of high schools have police officers. Seventy percent of students involved in school arrests or referred to law enforcement are Black or Latino. Students with disabilities are three times as likely to be arrested at school than students without disabilities. Understandably, many educators and parents worry about taking police out of school in the context of school shootings. This is a real problem, but school resource officers or police in schools have actually not been able to stop a single school shooting.

Instead, school safety is an issue that should be taken up by democratically elected safety committees in schools, made up of educators, students, and parents. The goal of these committees should be to identify restorative justice practices and school safety measures that can be an alternative to having police in the building.

Demands for Black Lives Matter and Educators in Struggle

We have an unprecedented opportunity to fight for the schools that our students and communities deserve! In the context of an economic depression and a mass movement against racism, educators have an obligation to demand the resources needed to provide for students across the country. Schools pre-pandemic were brutally underfunded, and we don’t have to go back to that normal. We must reimagine the way that we educate young people.

Demands for the Educator Movement:

Worker’s Voice: Seattle Music Teacher on Going Back to School

Pittsburgh’s Fight For Community Control Over the Police