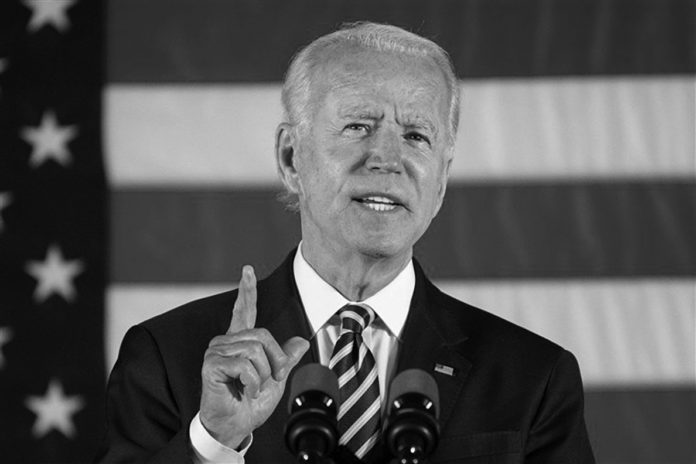 Trump’s support is plummeting in poll after poll. He has grossly mishandled the pandemic, downplaying the severity of the COVID-19 crisis. The economy is tanking on a level not seen since the Great Depression of the 1930s, with tens of millions unemployed, yet Trump is seemingly oblivious to the poverty and deep uncertainty faced by millions.

Yet the biggest contributor to Trump’s crash in the polls was his response to the Justice for George Floyd rebellion. He tweeted about crushing the rebellion while hiding in a bunker, called for shooting looters, and wanted to classify antifa as a terrorist organization — despite the fact that antifa isn’t an organization at all, and the KKK isn’t even designated as a terrorist organization! In this context, support for BLM protests skyrocketed in every poll. One survey showed that more people approve of burning down a police station in Minneapolis than support either Trump or Biden!

Biden now has a significant lead over Trump with a double-digit margin in many polls. Many working-class and young people would understandably be excited to see the end of Trump’s regime. However, this isn’t due to any enthusiasm for Biden or the corporate-controlled Democratic Party leadership. Nearly every revolt against racism is in cities with Democratic mayors and city councils, with protesters often correctly calling for their resignations for overseeing decades of institutional racism. Virtually every major city in the U.S. has been run by Democratic politicians for decades, and inequality has been increasing. Biden himself has performed no better in this uprising.

While protesters demand cuts to bloated militarized cop budgets with the slogan “Defund the Police,” Biden has proposed spending more money on law enforcement. Biden has been largely missing in action for months, but his rare appearances have been marked by quasi-racist statements; he said “you ain’t black” if you don’t vote for him, and recently said instead of fatally shooting Black people, cops should “shoot them in the leg” when confronting suspects. Biden is a long standing supporter of policies which made institutional racism worse. He worked with arch-segregationists on a series of “law and order” bills in Congress and was a key architect of legislation in the 1990s that fueled mass incarceration. Despite his sizable lead in the polls, Biden could still lose this election because virtually nobody is enthusiastic about his campaign.

We are faced with mass unemployment that isn’t going away with the pandemic and could become all the more devastating if the federal $600/week unemployment top-up expires on July 31 and isn’t replaced with similar measures to help people out of work. On top of this, state and local governments are discussing drastic budget cuts that would slash away at already under-funded schools. Making matters worse, millions are faced with the prospect of evictions for being unable to pay their rents during these crises. Mobilizing around the demands to “Defund the Police,” taxing the rich, and housing justice is the way to maintain the momentum of the mass movement for racial justice.

The uprising after George Floyd’s murder won more victories against racism and changed consciousness more dramatically in just a few short days than decades of electing moderate Democrats backed by big business. Building and linking up powerful movements against racism, evictions, bloated police budgets, and tax-dodging corporations should be where activists put their efforts rather than into supporting Joe Biden.

While Biden says he wants an “FDR-sized presidency,” we’ve heard this rhetoric before from mainstream Democrats. Also, we should remember what it took to pressure FDR to enact the New Deal, increased union rights, and other concessions won from the ruling class in the 1930s. There was a mass movement of the unemployed and an unprecedented strike wave, in which socialists and communists played a crucial role. While some pro-capitalist politicians will want to put more money in the pockets of workers and young people, this is only to prop up spending in their decaying system and to try to cut across demands for more far-reaching change. It also won’t be enough in the face of the colossal crisis we face. We need to get organized to win more than the crumbs the billionaires and their politicians are willing to give us.

We Need a New Party of Class Struggle

When we organize in the streets, campuses, and workplaces without a political tool for working people, we’re fighting with one arm tied behind our backs. The calls for resignation of mayors who tried to crush the uprising are correct, but who do we replace them with? Electing more big business politicians, no matter what their rhetoric, is not the way to win real changes to policing or decisive measures to end the structural racism that is inseparable from this capitalist system of exploitation and oppression. We need independent working-class candidates that are accountable to the movement and its demands. This requires organization and ultimately a new party for working people.

In both 2016 and 2020, the Bernie Sanders campaign brought together union activists and young people in grassroots campaigns for a “political revolution against the billionaire class.” This could have provided the framework for a new working-class party, but Bernie remained stuck in the straightjacket of the Democratic Party. Now Sanders and his program are isolated as he supports Joe Biden and opposes calls to defund the police, remaining largely absent from the recent uprising. The attempts to transform the Democratic Party have failed, and we need to build a new force.

If the Democrats win decisively in this year’s elections, they would be oversee a system in decay and extreme crisis. They would respond with half measures that suit their corporate backers. This would create rage and a huge opportunity to build a new working-class party, but there is also the danger that the far right would benefit from this situation. If the unions, the left, and social movements remain tied to the Democratic Party and don’t organize for a clear alternative, then something worse than Trump could emerge. We should remember that it was the Democratic establishment that created the space for Trump’s ascendancy in the first place with years of empty promises while doing the bidding of the billionaire class.

History Knocking at Our Door

History is knocking at the door of the left, from Alexandria Ocasio-Cortez to union leaders and the growing Democratic Socialists of America. If we don’t break from the vicious cycle of corporate parties and politics, then the future for humanity is dire. We need a strong left protest vote in this election to demonstrate that we refuse to be taken for granted by the Democratic Party yet again. Despite the big weaknesses of the Green Party, Howie Hawkins’ campaign seems best positioned for this. Socialist Alternative members will be debating our approach to the 2020 election this summer through our democratic structures.

To lay the basis for a new party, socialists have more important tasks than voting and elections this year. To be successful, a new party can’t just be focused on getting people elected; it needs to be rooted in struggle with grassroots participation in democratically-organized mass movements.

An explosive new movement against racism has emerged with working-class and black youth at the forefront. With the twin horrors of the pandemic and economic catastrophe, millions more people could be moving into action against budget cuts, unemployment, and a deepening housing crisis. Calls to defund the police, combined with demands for fully funded public education, a massive housing program, Medicare for All, and taxing the rich, could bring together an ongoing rebellion. This time, we’ll need to be better organized and lay the basis for a new working-class party that we can use to defeat this rotten, racist, capitalist system, once and for all.