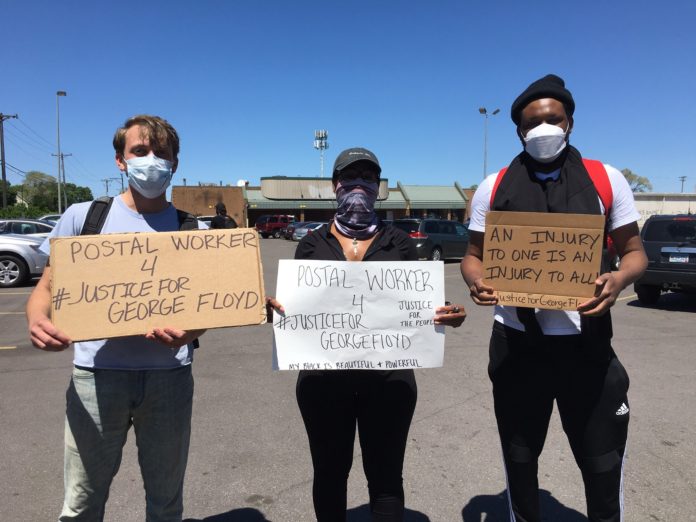 Two post offices in South Minneapolis, both located directly next to police precincts, were burned to the ground during the first week of mass protests for Justice for George Floyd. I am a letter carrier in Minneapolis and the post office I work at also delivers in South Minneapolis, just a few miles north of where George Floyd was killed. Every one of my co-workers was talking about the protests and, after the first week, it was clear to me that many of us were attending the protests as individuals. I wanted to find a way to have us go as a group to represent our union and the communities we live and work in.

We are in for a fight of our own at the postal service, as Louis Dejoy, a Trump Administration appointee, just took over as Postmaster General. He comes from the background of running a logistics company that specialized in automation and union busting, with a long history of labor violations. He is clearly being appointed for a reason, to attempt to carry through the Trump administration’s plans to privatize the postal service, and attack the postal unions.

The fight to save the public postal service is directly connected to the broader struggle to defund the police, tax the ultra-rich, and fund jobs programs, affordable housing, quality education, and social services instead.

In this context, it is important that union postal workers participate in the Black Lives Matter movement and take up the demand to defund the police.

In early June after the first week of mass protests, a few co-workers and I decided to hold a press conference in front of the burned out Lake Street Post Office, with the main message being “You can rebuild a post office, but you can’t rebuild the life of someone murdered by the police.” I used the petition Union Members for Justice for George Floyd started by an Amalgamated Transit Union (ATU) Local 1005 member (bus/train operators union) to initiate conversations with coworkers. Out of those conversations I got around ten people within the first day to commit to going to a rally, many of whom were enthusiastic about doing some sort of postal worker/union action. One of my coworkers came up with the idea that we should then march to the memorial site where George Floyd died which was only one and a half miles away from the location of our press conference.

Due to the fast pace of events, we felt it was necessary to get an action organized with a time, place, basic messaging, and Facebook event page as soon as possible. Once we got the ball rolling, we were able to win the support of the local union leadership. The local endorsed the action and helped build it. A huge help in winning over local leadership to actively engage in the Black Lives Matter movement was citing work done by ATU members and UFCW co-op grocery workers (who staged a nine-minute walkout in solidarity with the movement). We pointed to these actions as examples that can help show the power of organized labor to an entire new generation of radicalizing young people.

At the press conference, around 40 postal workers representing most post offices in Minneapolis (majority NALC, but a few APWU members) gathered behind the banner “Postal Workers Demand Justice for George Floyd,” with around 100 community supporters (a few St Paul teachers, AFSCME, and ATU members). From there we marched the one and a half miles to the memorial site, and because of the high energy of the march we were able to double our size to 300 as people spontaneously joined us from the sidewalks and houses along the route.

We received a lot of positive press coverage, including two local stations that played interviews and footage of the action on that evening’s and the next morning’s primetime news, a live interview on CNN, and interviews in local papers. The following week everyone at my post office was talking about it and looking forward to the next rally we organize.

The action was a huge success, and can help to build the Minneapolis labor movement’s involvement in Black Lives Matter and other social struggles going forward.

We are following up our initial organizing by broadening our future actions including a “Labor United Against Police Brutality” rally. The goal is to bring together unions from across Minneapolis to oppose police violence against people of color.

It is crucial that organized labor is involved in the Black Lives Matter movement. Because this is first and foremost about winning justice for George Floyd, and all victims of police violence, but it is and always has been about more than that. It’s about fighting for good-paying union jobs, access to quality education, and housing for all workers which will disproportionately benefit workers of color. If unions took this lead and organized mass demonstrations of working people against police violence and discrimination of all kinds it would further escalate the discussion in society as a whole, as well as point the way forward around concrete demands and next steps.

This shows that we are more than just workers, many of us live in these communities and have personally been affected by police brutality and violence. This shows that what happens outside of work can affect us on the job, and vice versa. And that if we are to rebuild a fighting labor movement in this country, then our unions need to fight for the entire working class, and that means fighting police violence, racism, and all forms of gender and sexual oppression. Organized labor shows the potential that working people have when we come together to fight for a common cause. It’s time for our unions to stand up for the interests of working people everywhere.

Tyler Vasseur is a Member of the National Association of Letter Carriers, Branch 9 (Minneapolis)