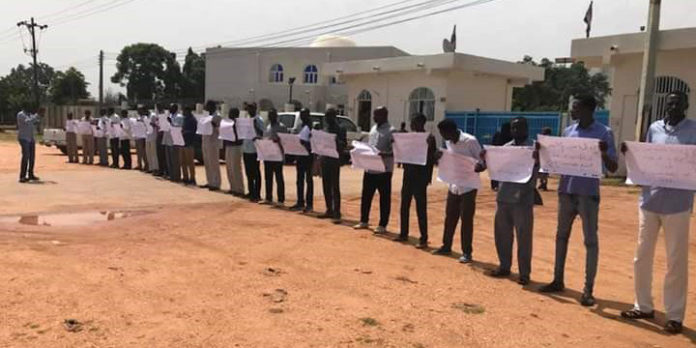 As many countries are relaxing safety measures, the Covid-19 pandemic is steadily developing in Africa and threatening its health systems. In the majority of African countries, capitalist states have been implementing policies that are not commensurate with the poverty-stricken economic and social conditions which they have perpetuated and worsened. The use of law enforcement tools in their most brutal form, including by opening fire on lockdown “breakers”, has itself become a pandemic for the classes that do not have the means to obtain what they need to survive for the duration of the lockdowns.

The number of cases in Sudan initially grew only slowly from the day the first case appeared, on March 12, until the beginning of April. But since then they have shot up, numbering now in the thousands, making Sudan the country with the highest number of cases and deaths in East Africa. Many experts fear that the entire health system could collapse in light of the increasing number of cases and the weakness of medical supplies and shortages of medical personnel. After a nationwide lockdown and a ban on inter-state transport were imposed in April, the government has renewed the lockdown measures this month in the state of Khartoum, which has the highest concentration of infections.

The death rate in Sudan is high in comparison to the global death rate, and the number of recovered cases is a smaller percentage compared to the rate of recovery in most countries. Some health personnel have also confirmed that there are an increasing number of infections within the medical staff, as a result of the lack of protection equipment. There is also a severe shortage of testing tools, which has pushed even the Health Minister to acknowledge that the real number of Covid-19 cases is much higher than the official data.

A health system in crisis

The health system is far from providing healthcare to the majority of Sudanese people, due to its weak facilities, even inside the big cities. It is completely absence outside the cities and in the rural and marginal areas, especially in the war zones. It is the same health system that was at fault when a total of 36,962 cases of cholera were registered in 18 Sudanese states between August 2016 to March 2018, according to WHO data. This cholera outbreak resulted in the death of 823 people, 15% of whom were children under the age of five. In November alone, more than 250,000 cases of malaria were reported from Darfur, according to the Federal Ministry of Health. This includes approximately 110,000 cases of malaria in South Darfur State, 103,000 cases in North Darfur State, and about 45,000 cases in East Darfur State.

The current situation is exposing the terrible state of the health sector, in terms of staffing, hospitals, level of technical development, capacity, and access. It has also led to clashes between state-owned hospitals and the private sector, with the latter threatening to close its doors in light of the Covid-19 pandemic, displaying an irresponsible and reckless attitude guided only by the profits of these companies. Meanwhile, drug manufacturers and importers continue to exploit the crisis and the weak healthcare system for their own agendas. An example of this is the new tariffs imposed by the “Drug Importers Division”, which doubled the price of imported medicine, and the threat by Ami Pharma Factory to stop production.

Private hospitals have now stopped providing health services for fear of receiving any cases of Covid-19 that would require them to adhere to health procedures such as sterilization, along with the rest of the procedures from the Health Ministry. This has had a catastrophic impact on the public health sector, which pays the price for the previous regime’s policies of having allocated resources and support mainly to private health providers, while underinvesting and privatizing in the public sector. The result today is great suffering for patients, and deaths outside the hospital due to the lack of the required medical assistance. The closure of many private hospitals and the overstretched situation in public hospitals and health centers has also led to an increased mortality rate among people suffering from other conditions, who have been left without medical treatment.

The health staff continues to bear the brunt of all of this, as illustrated by the recent and increasingly common physical attacks that have hit medical workers in a number of hospitals inside and outside Khartoum, and which have triggered several rounds of strike actions in recent weeks. In the last one a doctor was seriously injured with a head injury. These attacks cannot be separated from the broader picture marked by the deterioration of the whole healthcare sector. Health workers face shortages of medical supplies, the lack of protective equipment, security hazards and the lack of legal protection during work, as well as a deterioration of their status, whether from poor salaries, precarious contracts and after-service and in-service overtime work.

All this prompted the United Doctors’ Office on May 21 to threaten to withdraw their labor from hospitals within 72 hours unless their demands were responded to, notably by passing a law to protect health personnel from these repeated attacks. This forced the government to announce the creation of a police force to protect health facilities.

Working-class conditions under the pandemic

Besides this poor healthcare situation, the working class is facing multiple threats under this pandemic, despite the safety and lockdown measures imposed by the state. Some companies have shut down their operations, but others are forcing their workers to work under bad conditions and long working hours without any attention to safety measures. For example, JTI Lacto Company, which is still working to full capacity as a registered food company, does not provide workers with any equipment for health security and is not sterilizing its halls, despite cases of Covid-19 having been recorded inside the factory. Likewise, the cleaners in Khartoum State have threatened to strike until their demands were fulfilled, which include being provided with the necessary protective tools.

These are only two examples among many of workers facing poor working environments and renewed exploitation from capital. The fact that workers are not represented on the “Health Emergency Committee”, even though they are in the frontline of the pandemic on the one hand, and struggling with aggravated economic conditions on the other, speaks volume about the indifference manifested to their conditions by the current government. In many cases, workers are not even allowed to organize themselves into a union to protect their rights, such as in DAL (food industry), a company which does not allow unions within its compounds. In other cases, workers have been subjected to arbitrary dismissals and penalties when they have claimed health protection equipment.

Lock-down and its effect on the working class

What constitutes a real threat to the working classes is not only the epidemic itself, but the lockdown announced by the government. The simulation of policies used in advanced capitalist countries that have higher capabilities and stronger infrastructure is turning out to be particularly devastating for the working class and poor communities in Sudan. Millions of workers work from day to day informally, such as the 23,000 women tea sellers in Khartoum, and even before the lock-down, they barely made ends meet, especially in light of the high inflation the country is experiencing — in April the inflation rate jumped to 99%.

In addition to the lockdown and high prices, the queues for bread and cooking gas have continued to grow throughout this period, and these commodities are still completely absent in some regions. Since the poor face a lack of other options -unlike the upper classes in society who have the money to buy from the black markets and to store enough for the duration of the lockdown — this makes the lock-down an extremely unfair and unequal state of affairs.

In the meantime, the forces of the counter-revolution have been busy using murky and dishonest methods to try and exploit the new situation to their advantage. The government did not respond adequately to the spread of the epidemic inside the prisons and some leaders of the ousted regime have been infected. This has given the opportunity to supporters of the old regime to establish vigils in front of the prison, demanding their release. Ironically the same filthy prison environment that the cadres of the previous regime protest against, as well as the rickety health system that the former regime derides to discredit the revolution, are the same health system and prison structure that their deposed regime, which had ruled for 30 years, left behind.

Forces linked to the ousted regime and to the Islamist movement through both the National Congress Party (NCP) and the Popular Congress Party (PCP), have also participated in demonstrations during the lockdown period, in order to undermine the lockdown and destabilize the transitional government.

Supporters of the old regime forces have also been working on whipping up dissatisfaction among the tribes, which is a method they have used throughout Al Bashir’s rule, and that they are reigniting today in light of the current crisis. In Kassala, in the eastern part of the country, tribal clashes killed 10 people earlier this month. The sowing of discord among the tribes of the East is something that bears the fingerprints of the old state machine.

This being said, the clashes of a tribal nature that have erupted during the past few days cannot be simplified by limiting them to acts triggered by the counter-revolution. This tribal violence stems more fundamentally from conflicts over resources, and from a history of the absence of economic, social and political justice for the local communities. Therefore, while the counterrevolution had a hand in igniting and returning these conflicts to the surface, the root causes of these problems have to be tackled in order to achieve peace, and end this tribal radicalism once and for all.

Noticeably during this tribal violence, the military and security forces looked the other way as the clashes took place, showing the complete failure and unwillingness of the military wing of the current government to maintain security — a cornerstone of the document that governs the so-called transitional period and of the arguments used by the “Forces of the Declaration for Freedom and Change” to justify their capitulation to the reactionary generals. The episode has also brought to light the contradictions that lie behind the power-sharing agreement between the civilian and military components of the government, which the Covid-19 crisis is exacerbating.

As the ISA supporters in Sudan have explained, this agreement has been the biggest obstacle on the road towards bringing about a genuine government of the revolution. Abdalla Hamdok’s transitional government is the product of an untenable compromise between on the one hand, political forces that reflect (albeit in an inadequate and deformed fashion) the revolutionary struggle led by the masses against the dictatorship; and on the other hand, the Military Council, that was at the core of the power-structure of that same dictatorship. With this precarious arrangement threatening to collapse, and a new economic and health crisis rapidly progressing in the country, the need to prepare and organize for a new phase of revolutionary struggle remains all the more necessary and urgent.