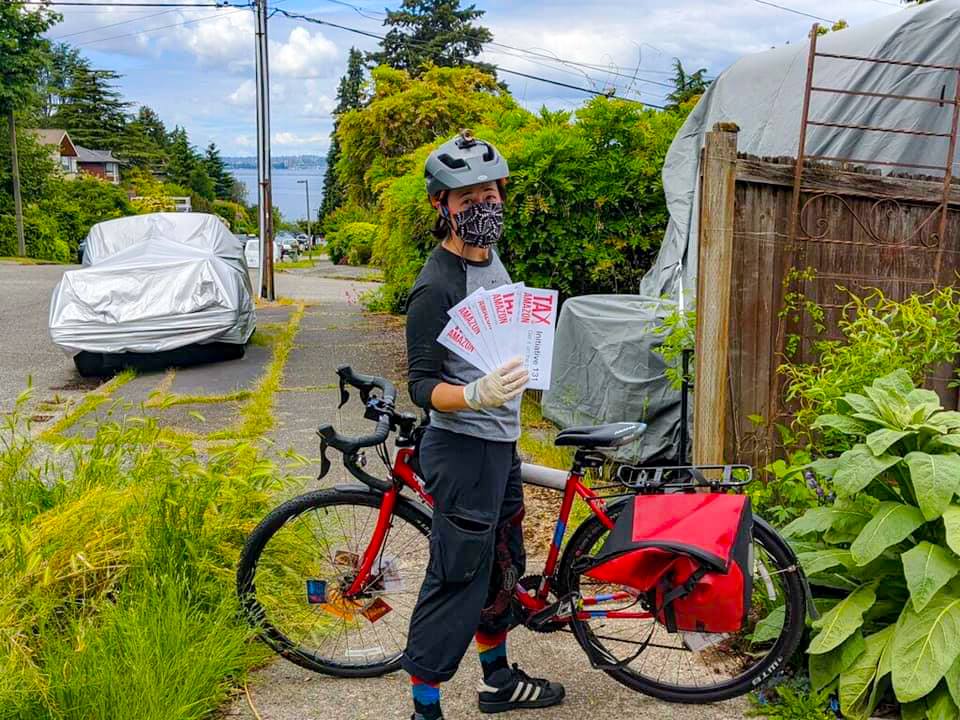 The Tax Amazon movement hit the ground running on Saturday, May 23. In five locations across two Seattle districts, nearly a hundred volunteers picked up gloves, masks, and safety guidelines before loading a bag with petition envelopes and hitting their turf.

At the third Action Conference a week prior, the movement voted to go all out gathering signatures for Initiative 131, a measure that will raise $300 million to create union jobs building affordable social housing. What this looks like under the conditions of the pandemic is a door-to-door volunteer service to safely deliver tens of thousands of petitions in envelopes for people to sign on the spot or mail back, dubbed Amazon Tax Prime.

My dispatch point was the Bethany United Church of Christ in the Beacon Hill neighborhood of District 2, which has been a hub of organizing for our campaign to tax big business for jobs and housing. Bethany is served by Reverend Angela Ying, an effervescent and selfless advocate for Seattle’s poor and working class who plays a leading role in the campaign on the elected Coordinating Committee.

The first building is a one-story multiplex next to a mechanic at the corner of a busy intersection. Wearing my gloves and mask, I pinch a petition envelope between the doorknob and jamb, knock, and step back 8-10 feet for social distancing. I’m not sure what to expect, knocking on a stranger’s door during a global pandemic.

Our campaign and the Seattle chapter of the National Lawyers Guild have appealed to the city and state to allow digital signatures like Ohio, Massachusetts, and New Jersey, only to be stonewalled. When pressed on how working people can organize during a public health crisis for a ballot initiative – one of the few democratic vehicles available to us –  the state shrugged.

A young woman cheerfully answers the door and I tell her about our ballot initiative. How we’re fighting to tax big businesses like Amazon: a company raking in billions while their workers go without basic safety equipment. How corporations are getting trillions in handouts while working families got a paltry one-time check that covers only around half of average Seattle rent. How the overarching question in this triple emergency of a public health, housing, and jobs crisis is, “Who will pay, big business or working people?”

She opens up the envelope and takes it inside, returning quickly with the petition signed by her and her roommate. Two doors on, I meet a middle aged man who’s furloughed from his job in Pioneer Square. Very supportive, he left his petition outside his door for me to pick up on my way out, but came outside to talk anyway as I made my exit to the next building.

Overall I covered three large blocks, with a number of multi-unit buildings in them, and didn’t encounter one person who was openly against our demands. Many were excited to hear about our campaign but weren’t ready to return the petition until they got their roommates to sign on.

When I returned to the church, I got to hear about the people who pulled over to our dispatch point on busy Beacon Avenue and signed petitions on the spot, some asking if they could grab a stack to take back to their apartment buildings. The political moment is ripe for a campaign that fights unapologetically for working people and will finally relieve us of a bit of our burden. The signature gathering launch confirmed that, and all told, volunteers distributed over 5,000 petitions on Saturday. Coalition members were emboldened by the success of the day, with unions and community organizations volunteering to take on other districts and spread Tax Amazon across the city.

Regular people are watching in horror as the death toll of this pandemic climbs to 100,000. They’ve struggled for years to keep up with ever increasing rents. Now many of us are out of work or pressed into unsafe workplaces, with no meaningful relief coming from the political establishment as the parties of big business throw trillions into Wall Street.

This campaign is a continuing effort since 2018, because despite the devastation of a global pandemic, workers have been faced with low wages and rising rents for years. The success of our campaign will begin to address these outstanding grievances and demonstrate to workers and youth across the country the necessity of a fighting approach to meet our needs. When we fight, we can win.

But working people’s movements are more powerful the more neighborhoods, unions, and workplaces they’re rooted in. So if you’re reading this article and agree that the billionaires getting richer from a health crisis need to pay, if you want to see an explosive victory for renters and workers that will raise the fighting confidence of your coworkers and neighbors, you need to join our movement and help turn “can win” to “will win.”