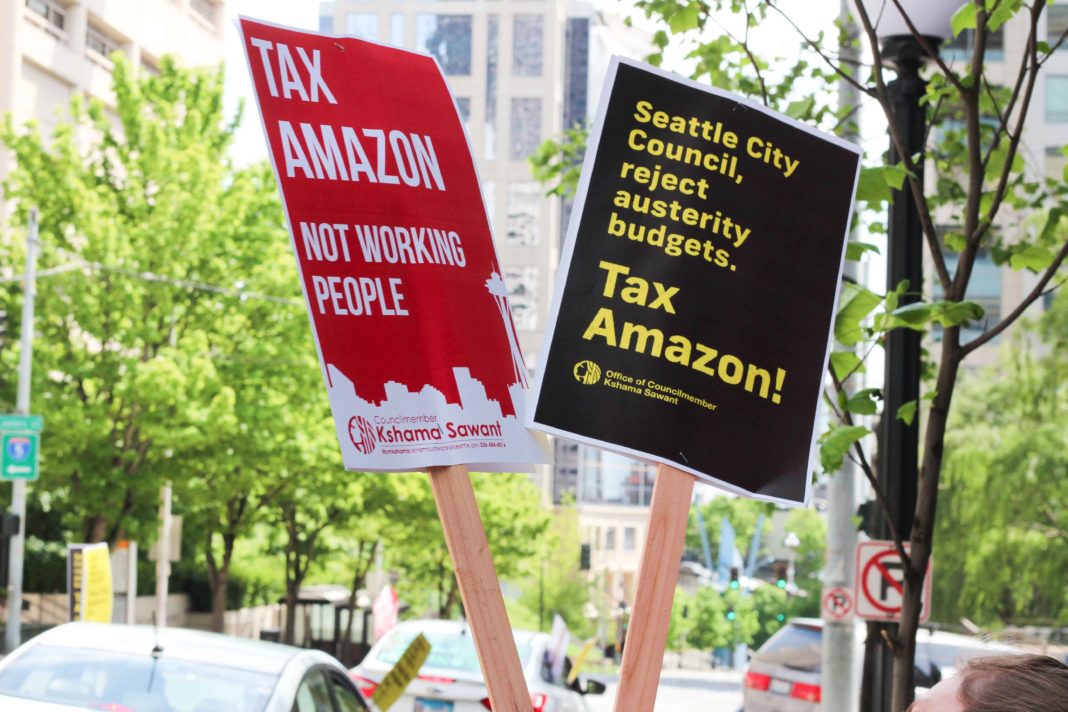 On Saturday, May 16, more than 250 Seattle activists fighting to Tax Amazon for housing and jobs met through a Zoom conference to decide on and plan the next stage of the movement – going all out to get the signatures for our ballot initiative. Following an energetic plenary discussion on a resolution outlining new developments and the launch of a safe, socially distanced signature gathering campaign, the campaign raised nearly $11,000!

Working people are faced with a triple emergency of public health, housing, and employment and action is needed now more than ever to address our needs. “Business as usual” is forcing workers to bear the burden of the crises of this system, but we don’t have any more to give. Thirty-eight million are unemployed, millions of renters unable to pay and could face homelessness once eviction moratoriums are lifted.

Our movement has been fighting to have digital signatures either be accepted or for the number of signatures required to be lowered, to avoid needing to interact face-to-face with others during the pandemic. The political establishment in Seattle and Olympia have refused, and when asked how we can safely practice what little democratic process is available to regular people, the response from officials has been “We don’t know.” Mortgage and student loan paperwork is regularly done digitally, when hundreds of thousands of dollars are on the line in each case. That collecting electronic signatures to get an initiative on the ballot isn’t allowed is as ridiculous as it is undemocratic.

After the open discussion at the conference, those attending broke out into district-based discussion groups to collaborate on how to best build the campaign in neighborhoods across the city: how will our “Amazon Tax Prime” ballot petition delivery service work, what local businesses could be won over to supporting the campaign and act as a hub for signature gathering, how to respond to right wing attacks being broadcasted by the media?

After the district breakout groups, the conference voted nearly unanimously for the resolution proposed by the coordinating committee: We cannot rely on City Hall, we’re going all-out to collect signatures.

The Coordinating Committee is the leadership body elected at the first Action Conference in February, made up of union members, faith leaders, socialists, environmentalists, and housing advocates. Following the flat refusal of elected Democrats at the state and local level to meet our needs through legislation or easing the lift of a ballot initiative, the discussion focused on how to scale these obstacles put up by the political establishment. (For example, Seattle’s Democratic political establishment maneuvered a shameful attack on the movement, suspending committee meetings scheduled to discuss the Sawant-Morales legislation that would raise $500 million for COVID relief, union wage paying jobs, and affordable social housing.)

Democrats Refuse to Meet to Discuss the Amazon Tax

Citing concerns over potential violations of the Open Public Meetings Act (OPMA), Councilmember Lisa Herbold approached Budget Committee chair Teresa Mosqueda and Council President Lorena Gonzales who agreed to cancel the meetings where the Amazon Tax was being discussed. But their legal arguments are so weak that even the anti-worker Seattle Times had to concede that lawyers were divided on if it held up.

Prominent Seattle labor lawyer, Dmitri Iglitzen, held a joint press conference with socialist City Councilmember Kshama Sawant where he explained why the Governor’s emergency order did not have the legal scope to prevent the meetings and further that the OPMA had no requirements for in-person meetings. At the same press conference, Sawant announced she would be holding further discussion on the Amazon Tax in her own committee since the Democratic councilmembers refused to.

Many of these same politicians, with the exception of Councilmember Sawant, flagrantly violated the OPMA in 2018 in defense of Amazon, holding backroom meetings to repeal the Amazon Tax the Council had passed unanimously only a month before. Slapped with a lawsuit, taxpayers footed the bill for this betrayal of working people and clear violation of the OPMA.

The basis of the latest claim is that the City Council can only discuss emergency-related measures during the pandemic and Stay At Home orders. But the pandemic is exacerbating existing crises faced by workers. City Hall declared an emergency over homelessness in 2015, but the Democratic political establishment has utterly failed to make any real progress while blocking big business taxes to fund affordable housing.

Seattle had the highest number of unemployment claims in the country in the year leading up to the pandemic, a title it’s held onto despite the tens of millions newly out of work. Between mass unemployment, over a decade of a worsening affordable housing crisis, and a global pandemic, how many emergencies do working families need to be dealing with before the political establishment will act?

With only a 1% tax on the 2% biggest businesses in Seattle, 100,000 working-class households would get four months of $500 payments to help families weather this crisis. The $300 million left over – and full $500 million every year thereafter – would create an estimated 10,000 publicly owned affordable homes in the first decade.

The Amazon Tax would also create an estimated 10,000 union jobs in new construction, creating or supporting 34,000 jobs overall over ten years. In the year prior to the COVID outbreak, Seattle had the highest rate of new unemployment claims in the country, a title it’s held onto despite the 36 million workers across the country that have applied for benefits since the virus hit. In the context of the crisis, and with cuts to needed social services likely to be proposed in state budgets across the country, our tax on Amazon and big business in Seattle is more urgently needed than ever.