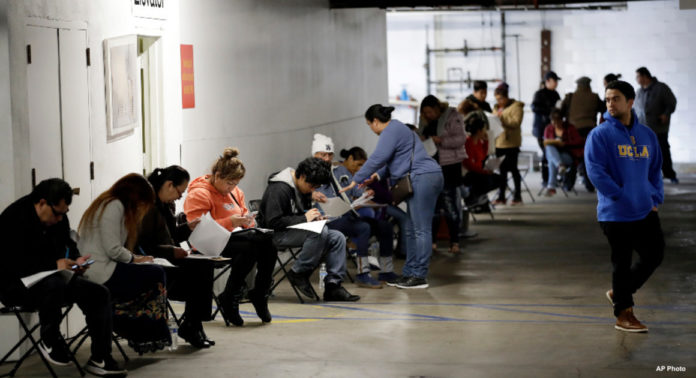 Millions throughout the world face the threat of unemployment as the unfolding economic crisis develops. While bosses and governments will argue there is no alternative, there is.

Humanity is facing a crisis of historic scope. The Covid-19 crisis has killed over 240,000 according to the official figures, and these official figures are likely to be much lower than the real total. The lock-downs have slowed consumer spending, partly through the closing of shops, but also because of the rise in unemployment, and wage reductions. Figures from the April 10 show that the UK has had 1.2 million new claims for Universal Credit since the start of the lock-down, with some figures suggesting that by the end we could have over 3.5 million people without work — the first time the official unemployment figures would have been over 3 million in over 30 years. The US situation is even worse, with over 30 million people seeking unemployment benefits since the virus hit, as reported at the end of April.

The Covid crisis has clearly sent shock-waves through the capitalist system, but whilst it is the event that triggered the economic crisis, it is not the fundamental cause. The global capitalist system has been headed towards a recession for some time now. None of the contradictions which generated the 2008 financial crash were resolved in the last decade or more.

Instead they have been compounded. The capitalist system has again built up more huge debt bubbles, and meanwhile the growing division of the world into two competing spheres has pushed globalization partially into reverse. So whilst the pandemic may be what “pops” many of these bubbles, and while it clearly has a major economic impact of its own, it is the capitalist system itself which has created the foundations for yet another global economic crisis.

Possibly worse than during the “great depression”

The true scale of the crisis will not become clear for some time, but the indicators that we can see currently suggest it is likely to be significantly worse than 07/08, and indeed likely to be the worst since at least the Great Depression. There is even potential for it to be worse than that if capitalist governments do not intervene to mitigate its effects.

The global bourgeoisie will lay the blame for the economic crash squarely at the door of the coronavirus, and will likely also try to blame China. Capitalist governments must not be allowed to roll out the excuse that this crisis was solely down to an unforeseeable set of circumstances. Nor can we accept their mantra that we are “all in this together”. This can be used as the basis for an argument that we need a renewed period of austerity to pay for the borrowing that governments have had to do during this crisis.

The reality is that there’s very little left to cut. We have had a decade of attacks on our public services. We’ve had the smashing of workers’ rights, with the anti-trade-union laws, worsening employment conditions and the rise of zero-hour contracts. We have companies calling their workers “self-employed” in order to avoid paying pension contributions and sick or holiday pay, but clearly treating them as full employees.

In order to increase or maintain profits, companies will seek to use the Covid crisis as cover to make sweeping attacks on and layoffs of workers. The unions and the wider workers’ movement will have to fight in order to prevent this happening.

Jobs sacrificed to save profits

One of the first to take this approach was Richard Branson and his Virgin Airlines. Virgin threatened to sack staff if they were not given a £7 billion bailout, at the taxpayers’ expense. Those taxpayers of course do not include Richard himself, as he has been quite adept at avoiding paying his taxes, allowing him to amass a personal wealth of over £3.5 billion. Yet he expects the British public to pick up the bill and allow him to continue making profit after the lockdown ends.

British Airways has sacked 12,000 of its workers, despite having made profits of £3.2 billion last year, and having cash reserves of £9 billion. It is especially disgusting that a company with that much cash in the bank is able to make 12,000 people unemployed in one fell swoop. BA have made their profits at the expense of their workers, and are now discarding them. The government must move in to nationalize big companies who are threatening or making layoffs, with compensation paid to shareholders only on the basis of proven need.

Increasing levels of unemployment can only serve to deepen the financial crisis, as the working class become increasingly unable to buy back the products of their labor. The 07/08 crisis, from which we haven’t fully recovered, was mitigated by a global capitalist class that managed to act in a coordinated way to steady the ship through bank bailouts and financial stimulus packages. The fragmentation of the capitalist countries into differing spheres of influence mean that this type of united response is unlikely to be forthcoming in the current crisis. In addition to the increase in protectionist policies over the last decade, this crisis is likely to affect ever more industries, whereas the 07/08 crisis was largely centered on the banking industry.

Mass layoffs can be fought against. We have seen the recent example of the Harland and Wolff shipyard in Northern Ireland. The parent company went into administration, and the staff at the shipyard were threatened with layoffs. However, a campaign by the workers and Unite union, including Susan Fitzgerald, a member of our sister organization in Ireland, the Socialist Party, managed to succeed in keeping the shipyard open. This action included an extended occupation of the shipyard. Without this militant intervention by workers, all jobs at the plant would have been lost. Instead 70 jobs were saved. If this example were to widely followed, hundreds of thousands of jobs could be saved.

It is often suggested that under capitalism, companies are left to sink or swim by themselves. This is not the case at all. Capitalist governments are constantly propping up businesses and allowing them to make profit at the expense of taxpayers. Corporations are offered vast subsidies in a whole range of sectors.

This is currently happening with our railways, where the franchises have been suspended for the duration of the lock-down. This is essentially nationalizing the rail system — but not in order to improve services and protect workers. Instead this is being done in order to protect the franchises from making high losses, and then when there is profit to be made again, companies will be given the franchises back.

These are the same rail franchises that have consistently been trying to cut guards from their train services, in order to maximize the profits to be made. They will no doubt redouble their efforts when they again gain control of their services, fighting against the RMT union and rail workers who are trying to retain jobs and keep passengers safe.

Our railway infrastructure should be brought back into permanent public ownership, rather than being given back to profiteers. With the threat of climate change, affordable public transport should become the norm, and that is only possible under democratic workers control of the transport system, where the motive is provision of services rather than profit.

In addition, factories that are being shut down should be taken into public ownership to protect against job losses, but also to help the transition to a more sustainable economy. Plants should be retooled to build the kind of green infrastructure we need to move away from the fossil fuel based system we currently have. Fossil fuel companies receive annual subsidies from the UK government of up to £4.3 billion. This money should be used instead to create thousands of green jobs.

Small businesses should be given grants or loans in order to save them from closure. The government has, under pressure, been forced to provide some protection through its furlough scheme, but this is nowhere near enough. Firstly 80% of wages is not enough to survive for many people. Instead workers should receive 100% of wages, and the money should be paid to workers directly — not to employers. What’s more, the existing scheme is due to come to an end in June. And with very little chance that an economic recovery will have begun in earnest by that point — this raises the danger that furlough simply becomes a waiting room for redundancy for millions

Small businesses like restaurants will struggle, especially if social distancing measures are still in place, as they rely on having a full house to operate. If the government does not offer grants to small businesses we could see hundreds closing down permanently, costing many thousands more jobs.

The Universal Credit system is already extremely inadequate. It does not provide adequate money for the unemployed, and job centers have been increasingly outsourced to private companies who cut staff and continue to make these vital services worse. The pressure on the Job Center is likely to increase massively during this crisis, and the UC system must be scrapped and replaced with something fit for purpose. Benefits should genuinely reflect the real costs of living — and should be immediately available to all those who need them from day one of becoming unemployed, losing hours, or other such changes in circumstances.

But mass unemployment is not inevitable. There is work to be done in society, and while capitalism leaves millions without it, millions more are forced to work until they drop just to make ends meet. Socialists stand for the sharing out of work without loss of pay — the immediate implementation of a 35-hour week maximum. We fight for huge investment in socially useful jobs — such as building social housing to alleviate the crisis, or transitioning to green technologies and energy.

Chaotic capitalism makes use of the specter of unemployment to help drive down wages for those in work, and uses the unemployed as a “reserve army” of labor — to be brought into the workforce only when it is profitable to do so. But a socialist society — in which the vast monopolies that currently dominate the economy are owned publicly and run democratically — would be one in which the scourge of unemployment could be ended completely. A democratic plan for production could allow society to unleash the potential of every human individual, while ensuring that the gains of technological advances and automation are used to increasingly free people from the burdens of labor — not to enslave them further. That’s why we need to connect the fight against lay-offs and mass unemployment to the fight to transform society along socialist lines. If you agree, why not join us?